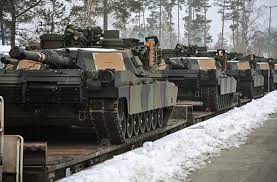 While the US government has yet to opine on the recently leaked information during Joe Biden's November trip to Ukraine that, contrary to conventional wisdom, the US is already providing lethal aid to Kiev, and certainly has said absolutely nothing about the presence of US soldiers - either taxpayer funded or mercenary - on Ukraine soil, the topic of legitimizing lethal weapons is once again on the front of the White House agenda.
According to the WSJ, "The U.S. government is considering providingJavelin antitank missiles, small arms and ammunition to Ukraine, part of an effort to try to deter further aggression by Russia-backed rebels there, according to U.S. officials."
Why now? The official story is that "The Pentagon has long supported providing some lethal aid, but until recently the White House has signaled little interest in such a move to avoid escalating the confrontation with Russian President Vladimir Putin.... An administration official said Susan Rice , the White House national-security adviser, has reopened the discussion, though officials cautioned that no decision has been made."
The one thing holding back the US is the question whether, in the words of the WSJ, "a decision to provide “defensive lethal arms” would prompt Mr. Putin to reduce his support for the pro-Moscow rebels or trigger him to ramp it up, further destabilizing the country."
The unofficial story is that having been caught red-handed in Ukraine, whose proxy civil war between the US and Russia is clear to anyone with half a brain by now, the US is tired of hiding its direct, and quite lethal, involvement and it prepared to risk the diplomatic fallout from officially supporting with weapons yet another foreign nations. Because the US support of Iraq's army wasn't enough of a lesson, if only for US taxpayers: recall that to General Dynamics, the ISIS tragicomedy has played out precisely as expected, and has been quite lucrative to boot.
And so Ukraine is about to make the shareholders of Raytheon and Lockheed Martin, the manufacturers of the Javelin missile, that little richer as a result of spreading democracy and the American wayaround the globe. Perhaps boost US GDP in the process as well. After all the ghost of Keynes is alive, and breaking windows, or as the case may be, firing anti-tank missiles deep in the night.
What is odd, is America's desire to get involved into yet another war on a different continent, especially when the purveyors of western ideals on said continent themselves are quite unwilling to get involved:

In Budapest on Monday, Ms. Merkel said Germany won’t supply arms to Ukraine because it was still banking on a peaceful solution, despite the recent escalation of hostilities.

That, and she knows quite well that the German borderline recession will be full-blown once Russia again retaliated to western Europe's own escalation, a key driver behind Europe's collapse into a triple-dip recession last year.
And finally, as to Obama's intention to engage Putin, even if unilaterally, perhaps the following interview by the president with CNN's Fareed Zakaria from this weekend will provide some clues. In it, rather distinctly, the US president admits that "Mr. Putin made this decision around Crimea and Ukraine — not because of some grand strategy, but essentially because he was caught off-balance by the protests in the Maidan and [Ukraine's then-President Viktor] Yanukovych then fleeing after we had brokered a deal to transition power in Ukraine."
Of course, in a normal and democratic nation, some would even inquire why the US was brokering "power transition" deals in Ukraine - allegedly a sovereign country - and whether as some have suggested, the US was behind the bloody events of the Euromaidan from precisely one year ago.
Then again, this is neither, and is instead a nation where the crowning achievement of the current administration was passed thanks to the "lack of transparency" and courtesy of the "stupidity of the American voter"...