Why Is Pope Francis Sounding Like a Conspiracy Theorist?


Does the pope really believe arms manufacturers are secretly backing ISIS and the bombers of European cities to create a market for their wares? Or does he just have a problem saying the words ‘radical Islam’?


TOKYO (Sputnik) — Earlier in the day, North Korean military announced the launch of a projectile, possibly a ballistic missile, into the Sea of Japan.

"Such provocative actions are unacceptable," Kishida said, as quoted by the Kyodo news agency.

According to Kishida, no damage to Japanese ships has been reported yet.

Tensions on the Korean Peninsula escalated after North Korea successfully carried out a hydrogen bomb test in early January and put a satellite into orbit a month later, violating UN Security Council resolutions and triggering condemnation from the international community.


“And bring thou near unto thee Aharon thy brother, and his sons with him, from among the children of Israel, that they may minister unto Me in the priest’s office, even Aharon, Nadav and Avihu, Elazar and Itamar, Aharon’s sons.” Exodus 28:1 (The Israel Bible™)

Kohanim blowing silver trumpets in a reenactment of a Temple service. (Photo: The Temple Institute)

The registry will include men who have a clear patriarchal heritage from the priestly class (descendants of Aaron), were born and raised in Israel, and have observed the laws of purity incumbent upon priests. This includes not coming into proximity with the dead, so priests, or kohanim, who were born in hospitals, have visited hospitals, or have entered cemeteries are not eligible.


Once the Temple Institute has compiled a list of candidates with verified eligibility, it will begin to train them in the complex preparation of the ashes of the red heifer. The training will take place at the Nezer Hakodesh, an institute established three years ago to educate priests in the details of the Temple service.

The project has implications not just for kohanim, but for anyone interested in taking part in the Temple service. Anyone going up to the Temple needs to be on a high level of ritual purity. Most types of impurity can be removed through immersion in a mikveh (a ritual bath). For ritual impurity imparted through contact or proximity to a dead person, the purification process requires a priest to sprinkle water mixed with the ashes of a red heifer.

Today, after thousands of years without a Temple, all people are considered to be on this level of impurity, making the reinstituting of the red heifer ashes an essential part of the return of the Temple service.

“This is a huge jump for the Temple Institute and a huge leap for the Jewish people. For the first time in 2,000 years, after miraculously returning to the Land of Israel, we are beginning the process of reinstating the Biblical purity of the Jewish priesthood,” Rabbi Richman told JNI.


“This is another bold move for our Institute, having already painstakingly prepared more than 60 sacred vessels for the Third Temple. We proudly call upon all those who may fit the bill to contact the Temple Institute immediately.”

The Temple Institute is a non-profit organization, founded in 1987, which is dedicated to rebuilding the Jewish Temple on Mount Moriah in Jerusalem. Much of its work has been in the areas of education and raising awareness, but it has also made remarkable practical achievements towards turning the Third Temple into a reality.

It has recreated over 70 utensils fit for the Temple service, including the gold menorah, the gem encrusted breastplate of the high priest, musical instruments used by the Levites, and priestly garments.


Perhaps its most amazing achievement to date has been the red heifer. After decades of research in how to practically restore the Temple, Temple Institute scholars realized that the first step in the seemingly impossible task was raising a red heifer. Frozen embryos of red angus cattle were implanted in Israeli cattle, introducing the breed to Israel.

Biblical law requires that the red heifer be unblemished, and it is forbidden from being milked or impregnated, so must be raised in special supervised conditions.

Unlike most other aspects of the Temple service, burning of the red heifer and the use of its ashes to purify do not require ascending to the Temple Mount. This precludes any political complications that may arise, since Jews are currently prevented from praying or performing any rituals at the holy site.

Credit to breakingisraelnews
Read more at http://www.breakingisraelnews.com/64632/third-temple-closer-than-ever-search-begins-eligible-jewish-priests-jewish-world/#5gOFYIyUGRg6QxM8.99
Posted by Unknown at 2:00 PM No comments: Links to this post

April 19: Temple Of Baal In New York Is Going Up On Significant Day 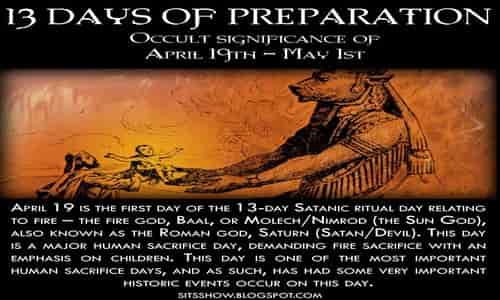 I am about to share with you some absolutely astounding information. It turns out that the exact day when reproductions of the arch that stood in front of the Temple of Baal are going to be erected in Times Square in New York City and in Trafalgar Square in London is also the exact day when a very important occult festival related to the worship of Baal begins.

April 19th is the first day of a 13 day period of time known as "the Blood Sacrifice to the Beast" that culminates on the high occult holy day of Beltane on May 1st. In some parts of the world, Beltane is much better known as "May Day", and it has been described as the "Illuminati s second most sacred holiday". As you will see below, we have indeed witnessed a disturbing series of "blood sacrifices" during the second half of April in recent years, and many people wonder if there is a connection.

April 19th is also known as the Feast of Moloch . If you are not familiar with "Moloch" or "Molech", it is an ancient Canaanite god that is repeatedly denounced in the Old Testament. Child sacrifice was a key feature of the worship of Moloch, and a giant statue of this pagan deity is set up at the Bohemian Grove in northern California every year.

Is it just a coincidence that reproductions of the arch that stood in front of the Temple of Baal in Palmyra, Syria are going up in New York and London on the precise day when the Feast of Moloch is celebrated and when the Blood Sacrifice to the Beast begins? The organization in charge of this "cultural project" is the Institute for Digital Archaeology. The following comes directly from their website...

On April 19, 2016, in cooperation with national and international cultural heritage preservation organizations, and in conjunction with World Heritage Week 2016, the Institute for Digital Archaeology will install a monumental scale reconstruction of Palmyra s Triumphal Arch on Trafalgar Square. Through this project and others like it scheduled throughout 2016 in cities both inside and outside the Middle East the IDA seeks to provide an optimistic and constructive response to the ongoing threats to history and heritage that have captured headlines over the past year. Our aim is to highlight the potential for the triumph of human ingenuity over violence by offering innovative, technology-driven options for the stewardship of objects and architecture from our shared past.

Are we to believe that this date was chosen at random?

Is it just some sort of weird "accident" that the date they decided on begins a 13 day period of time which is exceedingly significant for the worship of Baal?...

"April 19 May 1 Blood Sacrifice To The Beast, a most critical 13-day period. Fire sacrifice is required on April 19.

April 19 is the first day of the 13-day Satanic ritual day relating to fire the fire god, Baal, or Molech/Nimrod (the Sun God), also known as the Roman god, Saturn (Satan/Devil). This day is a major human sacrifice day, demanding fire sacrifice with an emphasis on children. This day is one of the most important human sacrifice days, and as such, has had some very important historic events occur on this day."

And as I mentioned above, we have indeed witnessed some very noteworthy "blood sacrifices" during the second half of the month of April over the past few decades.

The following list of events that have happened on or around April 19th comes from Vigilant Citizen...

In addition, let s not forget that Tamerlan Tsarnaev was shot to death on April 19th.
I also wanted to note that since 2016 is a leap year, April 20th will be the 111th day of the year, and triple numbers are considered to be "power dates" in the occult world.

This 13 day period which begins on April 19th culminates with the high occult holy day of Beltane on May 1st. In recent years, this occult holiday has experienced a tremendous resurgence especially in Europe. The origin of Beltane can be traced all the way back to the worship of Baal in the ancient Middle East. The following comes from examiner.com&

Beltane (pronounced, "B'yal-t'n") begins April 30th at sundown and lasts until sunrise on May 1st. Beltane is the opposite of Halloween on the Satanic calendar as Halloween is a time of reaping, while Beltane is a time of rebirth. This holiday is a time to celebrate fertility, indulgence, the rebirth of spring, and the Sumerian God Enlil (Baal), this is where the name "Beltane" originates.

Before any real celebrating took place, wood from nine different types of trees gathered and a sacred grid was made. The grid was created by drawing a square on the ground and dividing it into eight smaller squares. Turf from the eight outer squares were dug out leaving the ninth square intact. The Beltane fire symbolized the central hearth of the community, the divine fire in the center of all things, and the spark of life within mankind.

Beltane celebrations were celebrated in the nude and without shame. Celebrants would dance around the maypole which stood as a phallic symbol. Couples would pair up, jump through the bonfire, and had sex in the woods all night, after intense feasting.

And as I discussed in my article the other day, the worship of Baal can be traced all the way back to an ancient king of Babylon that is known in Sumerian sources as Enmerkar, but that is known in the Bible as Nimrod. He established the very first "New World Order" in the ancient world, and he fundamentally changed the course of human history.

After he passed away, this ancient king of Babylon eventually came to be worshipped as a sun god under a whole host of different names: Marduk, Osiris, Apollo etc.

Many secret societies and occult groups believe that someday this ancient deity will be "resurrected" and will once again take his place as the ruler of the world. And many Christians scholars are entirely convinced that there is some sort of connection between the ancient figure of Nimrod and the coming Antichrist.

Could it be possible that there is more to these "gateways" that are being constructed than we are being told?

Could it be possible that we are laying out giant "welcome signs" for the Antichrist?

We have entered a period of time known in the Bible as "the last days". If you think that what you have read in this article is a bit strange, well the truth is that you haven't seen anything yet.

From this point forward, things are going to get much, much stranger.

Ultimately, the world that we live in is going to come to resemble something out of a post-apocalyptic science fiction novel.

So enjoy the remaining days of "normal life" as we have all come to know it.

Our world is rapidly changing, and those changes will soon become extremely dramatic.

How Bad Would A Nuclear Terror Attack Be 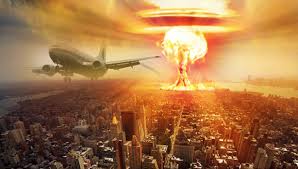