2015 Satanic Surprise Announced-the BIG Plan Has Just Gotten Bigger! Something Ominous Is Happening-A Scheme So Covert and Creepy, It Will Give You Chills! And, What Is Going On At Mt. Hermon Will Floor You! (Shocking Videos)

Who are they, and what are they doing? Or better, why? What is their BIG plan and why all the secrecy?
I am about to answer all these questions for you. First, however, if you believe in God, you must also believe in Satan. If you believe that God has a plan, and that God has a pure bloodline in which Jesus Christ came through, then you must also believe that Satan, the great liar, thief, and copycat, also has a plan and a pure bloodline which stems from the fallen angels—the Nephilim—known today as the 13 Illuminati bloodlines.  Below these 13 sinister bloodlines are many other family names, however, the 13 are the main ones in which all others fall beneath.
What are the 13 Illuminati family bloodlines?

Satan himself blessed the twelve bloodlines of the Illuminati in order to mock God’s 12 Tribes of Israel. However, the 13th bloodline of the Illuminati was injected with Satan’s seed and then handed down through the Satanic House of David (not the Godly house of David, the Satanic House of David flows through King Solomon and the Baalism that he allowed and partook in ‘in’ the Old Testament), and the French Merovingian bloodline (in red above). The Anti-Christ will in fact be birthed from this 13th Satanic bloodline.  Whether that birth is manufactured in a lab or an actual ‘vaginal’ birth, I do not know. The Illluminat Can Even Be Found Today Infiltrating the ‘Alleged’ Christian Industry—Not So Christian, Though, Is It?

Something Ominous Is Happening-A Scheme So Covert and Creepy, It Will Give You Chills!

This plan has long been in action since Satan was booted out of heaven, along with one third of the angels (fallen angels) when they landed on Mount Hermon a very long time ago.  Since that moment, it has been Satan’s drive to do everything in his power to mock God and to complete his plan.
The chart below lists the 15 Royal Bloodlines. Do not confuse this with the bloodlines (13 bloodlines) we have just discussed. If you would like more information on that, please CLICK HERE.
This is all part of the end times plan. God is ultimately in control, but he will allow their plan to follow through because prophecy must be fulfilled so that God can bring down judgment on sin! Please watch the feature video, and when you have time, the other included videos. Terrible things are about to happen in this world, and in the USA, and people refuse to wake up! You will see in these videos proof that the plan is deeper and more wicked than you ever believed!
Wait until you see what they are doing at Mount Hermon! You will be floored! CLICK HERE to see—Holy Land’s Mount Hermon: A United Nation’s Base Built to Deliver the Anti-Christ and Open the Gates of Hell (Shocking Video and Photos)

SOME CHILLING FACTS YOU DIDN’T KNOW:
The Lincoln Parallel
An interesting thing, which makes the Federal Reserve theory considerable, is a parallel 98 years from the year JFK was killed. In 1865 another US President was assassinated. His name was Abraham Lincoln. What did he do before the assassination? Well, he had done something similar President Kennedy later attempted to do…he created government interest-free money, so called greenback dollars, to pay off the debt from the Civil War. Shortly after he was killed, the greenbacks were taken out of circulation.
(EXCERPT SEE HERE: What JFK did was to create interest-free government money, backed up by the silver reserve, contrary to the Federal Reserve money, which is not backed up by anything as you will find out if you continue reading. He wanted to pay off the US debt this way. Apparently aware of the secret behind the Federal Reserve, he decided to go back and follow the Constitution. Of course, this was a very dangerous thing to do, because if he was allowed to continue, it could put the International bankers out of business in the long run.)
Lincoln was well aware of what was happening, as shown in this letter: “I see in the near future a crisis approaching. It unnerves me and causes me to tremble for the safety of my country. The money powers preys upon the nation in times of peace and conspires against it in times of adversity. It is more despotic than a monarchy, more insolent than autocracy, more selfish than bureaucracy. It denounces, as public enemies, all who question its methods or throw light upon its crimes. I have two great enemies, the Southern Army in front of me & the financial institutions at the rear, the latter is my greatest foe. Corporations have been enthroned, and an era of corruption in high places will follow, and the money power of the country will endeavor to prolong its reign by working upon the prejudices of the people until the wealth is aggregated in the hands of a few, and the Republic is destroyed.” —Illuminati News.Com

URGENT, Shocking News! Antichrist About To Appear-The Illuminati Has Come Out of the Closet!

2015 Something Shocking, Something Beyond Cryptic Has JUST Been Announced!

Most people know that the FEDERAL Reserve bank is creating the US dollars. But the truth is that the Federal Reserve is not federal at all, but owned by thirteen super-wealthy International Banking families, such as the Rothschild’s and the Rockefellers. This is a well hidden secret, but can even be verified in “Encyclopedia Britannica”, and in this article, as we shall see. This setup is against the US Constitution, as the government is supposed to create our money (the 16th Amendment), which in its turn should be backed up by gold and silver.
If you do not believe by now that evil is at play in the government, the music industry, Hollywood, and all aspects of our lives in order to establish one thing, and one thing alone—the reign of the coming Antichrist and the New World Order, you had best put on your reading glasses and do some research! My friends, it is happening right now, and we do not have long before the end of this age, as we know it, collapses!
Wait until you see what they are doing at Mount Hermon! You will be floored! CLICK HERE to see—Holy Land’s Mount Hermon: A United Nation’s Base Built to Deliver the Anti-Christ and Open the Gates of Hell (Shocking Video and Photos)

NEW, Breaking Prophecy News! SHEMITAH & BLOOD MOONS: EVEN MORE SIGNS That This IS THE END!

Is This Our Final Warning? A GREAT & MIGHTY SHAKING IS COMING! URGENT Shemitah & Blood Moon Update!

Wait until you see what they are doing at Mount Hermon! You will be floored! CLICK HERE to see—Holy Land’s Mount Hermon: A United Nation’s Base Built to Deliver the Anti-Christ and Open the Gates of Hell (Shocking Video and Photos)

Credit to Lyn Leahz
Posted by Unknown at 7:00 AM No comments: Links to this post

Liberman: We Need to Stop 'Whining' About Iran and Take Action 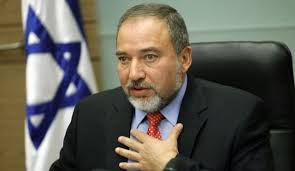 Foreign Minister Avigdor Liberman on Friday hinted that Prime Minister Binyamin Netanyahu is talking too much about Iran’s nuclear program instead of taking action.

Speaking to Channel 2 News, Liberman suggested that Netanyahu’supcoming speech to Congress, in which he will warn against a badnuclear deal with Iran, does not have significant importance and that too many speeches harm Israel’s deterrence.

“When Menachem Begin decided to destroy the Iraqi nuclear reactor, There were no speeches or public debate. We woke up one morning - and there was no reactor. The same is true for what we read in the media about Syria. One morning we woke up and the nuclear reactor was not there. Without speeches and without stories,” he said.

Liberman expressed his doubts about an agreement between the West and Iran being able to stop Iran from obtaining nuclear weapons, and said that it is Israel’s responsibility to ensure Iran doesn’t become a nuclearpower.

"We need to make decisions and we cannot pin it on anyone, with all my appreciation for the United States," he said, adding, "We have to act firmly instead of whining constantly. No agreement will prevent Iran from acquiring nuclear weapons. We need to decide alone and to act accordingly."

Liberman, as he has done several times in the past, also criticized the results of Operation Protective Edge in Gaza last summer, saying in the interview, “We cannot even eliminate Hamas, how will we deal with the Iranian program?”


Credit to Arutz Sheba
Posted by Unknown at 6:00 AM No comments: Links to this post

Dr. Jim Willie: Mushrooming of Chaos, EU in crisis, US Isolated, Russia-China ahead

Posted by Unknown at 5:00 AM No comments: Links to this post