Compelling Evidence of the Incursions of Giants, Their Extraordinary Technology, and IMMINENT RETURN Part # 4 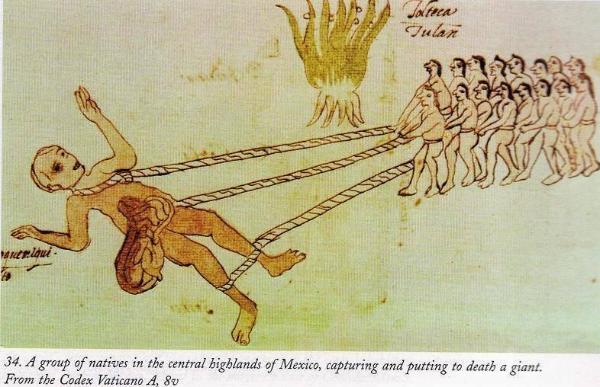 Drawing from the Codex Vaticanus (one of the oldest extant manuscripts of the Greek Bible) showing 16 natives dragging a dead giant toward a fire.
By Thomas R. Horn
Picking up where we left off in PART 3 of this series, John Wesley Powell’s arguments against public documentation of the giant bones unearthed throughout the United States in the 1800s-1900s continue to show either ignorance or clandestine agenda. Just to touch on a few examples regarding his report’s conclusions, in the order he addressed them:
Picture-writings: Powell openly acknowledges that some of the pictographs drawn on surfaces in and around these sites are “less conventional.” Drawings of a small human next to a giant with six fingers and six toes or a mouth with two rows of teeth would certainly fit into this category. However, Powell’s take on these drawings are, put simply, that they are not proof of anything more than imaginative etchings by a people who were only just learning to document their lives through the process of primitive creative writing. He attests that, the conventional and the less-conventional writings appear side by side at times, that “perfect records were never made.”[i] In other words, there is no knowing what is imaginative, early, fictional “creative writing” versus what is historical documentation of the lives they lived and the races they interacted with. “Hence,” Powell says, “it will be seen that it is illegitimate to use any pictographic matter of a date anterior to the discovery of the continent by Columbus for historic purposes.”[ii]
At the onset, this is a valid argument. We can’t know whether the drawings in every case were meant to alert the world of a giant race that the Indians witnessed or mingled with. On the other hand, the question is easily flipped back on Powell. If we don’t know which were purely imagination and which were documentation of reality, then Powell hasn’t even a scrap of evidence that the drawings of giants were always only imagination, especially with the discoveries of the giant bones in the nearby Indian mounds. Powell was correct in saying that a perfect record was not made, but he was ill-informed if he assumed that anything outside his own limited worldview was the subject of fairy-tale fancy. Much to the contrary, every ancient culture we have ever studied at length havs left behind its stories in wall and rock drawings, and it is from this artistic documentation form that we have developed much modern understanding of the old world, its inhabitants, and the people groups they mingled with.
That Powell would say these images are “illegitimate…for historic purposes” challenges the historical and archaeological practices set in place by experts of his own field for hundreds of years.
Origin of man: For a moment, and only a moment, we see Powell’s attempt to broaden his perspective and release his mind from the bonds of circular logic when he says: “Thus it is that while the doctrines [of evolution] lead the way to new fields of discovery, the new discoveries lead again to new doctrines.”[iii] So, yay, right? He’s acknowledging that new discoveries could potentially wipe out everything we know of the evolutionary doctrine, or at least result in a revolutionary revision of it—which would be a justice to both religion and science if mankind genuinely wishes to be informed of truth.
Unfortunately, though, this moment of clarity results in a mere tease as we observe him using the very doctrines of evolution as a means to escape further study of it. Rather than to unearth and analyze the evidence that challenges evolution so our scientific database can expand, Powell states: “The truth or error of such hypothetic genealogy [referring to giant myths] in no way affects the validity of the doctrines of evolution in the minds of scientific men, but on the other hand the value of the tentative theory is brought to final judgment under the laws of evolution.”[iv] In other words, the theories presented by believers of the ancient giant races ultimately have to come under the final judgment of “the laws of evolution.”

Through his posh and indirectly belittling double-speak report, Powell gained the support of Charles Doolittle Walcott, the chief executive officer of the Smithsonian, shortly after Powell’s death. Walcott hailed the report with such irrefutable and mesmeric magnitude that the Smithsonian executives deemed the document the “Powell Doctrine.” Powell’s smarter-than-you linguistic skills naturally fed the pride of many of his followers, which by extension lent itself to further brainwashing from the top rung of the Smithsonian and down. From 1907 to this day, the now-outdated Powell Doctrine has been the final word on the issue of giant bones, as well as ancient Indian culture. Powell was, himself, viewed as a great authority, but he was only one man. When Walcott rallied the rest of the Smithsonian superiors to embrace the Powell report, the rest of the world embraced it as well, because “they” said it was valid. As a result, then, the museum established the Powell Doctrine as a literal, official policy to exclude any and all alternative evaluations of the mounds, bones, pictographs, and human-origin hypotheses, regardless of evidence. Any perspective, no matter how scientifically sound, would be snuffed out under the suppressive abort button of the doctrine. After 1907, it would not matter what was found in the ground. The policy was solid. No opinion other than Powell’s would ever matter to the Smithsonian again.
And you can guess what naturally happens next: Under this administration, years of the institution’s time and money are placed into book collections, exhibits, staff training, and uncountable materials that support this doctrine as truth. The fortress built cannot easily be torn down, and its influence spreads.
Tragically, because of the weight the Smithsonian’s opinion holds to educational institutions across the United States, the Powell Doctrine policy of exclusion was also incorporated into the dogma of most major American universities, adding a behemoth layer of clout to Powell’s appraisal. Students of reputable colleges all across the country haven’t the slightest idea why they are being taught what they are, or that it all came from one man 150 years ago.
Much documentation has been collected that follows an unscrupulous trajectory from various archaeological digs to the Smithsonian as research teams are submitting their finds to the museum for study and/or display, and the trail goes dark at that point. The bones the Smithsonian is receiving are not making their way to the museum floor or laboratories, and nary is a word uttered that they were ever submitted after they were unearthed. Those who contribute the bones to the museum do so in naïve trust that the Smithsonian will appeal to the government for grants and additional research funds, but because of the policy, the buck stops there, and that in turn affects the budget allowance for universities to follow up with any kind of field study for tomorrow’s generation of scientists.
Despite this, well before Powell’s document, the world was aware of bizarre discoveries. Not limited to bones, this also included the strange astronomical and astrological building patterns surrounding ancient structures and monolithic edifices such as those in Baalbek, as well as enormous tools, strange drawings, and prevailing legend of primitive cultures all around the globe. The Smithsonian was not always involved in every discovery reported, which is why the public does not have to search far and wide into the archives of obscurity or conspiracy to be showered with visual evidence that something walked the earth in the old days we can’t explain away. And not every personality within the institution-of-the-final-word appreciated the deliberate blind eye.
In 1882, the same year as Powell’s published report, Powell appointed Cyrus Thomas to supervise the Division of Mound Exploration. Thomas was originally more than open-minded about the legends regarding an ancient and lost race of giants, as he had paid close attention to the reports concerning the discovery of gigantic human skeletons unearthed in and around enormous structures involving complex mathematics and astronomical alignment. But because he did not go around advertising his theories, there is much evidence that Powell would not have known Thomas was progressive in this “mythological” area when he chose him to oversee the mysterious mounds. Thomas would—at least initially—lead teams to document the discovery of impressive skeletons (though he steered clear of speaking of them himself). We’ll examine some of these documents in the next entry.
Credit to Tom Horn

You Won't Believe ANYTHING on Cable News After Seeing THIS!