Something is Brewwing in U.S.

As someone who has no principles are all empty words.
Son of Satan follower of false doctrine......

Curiously, Gore said that couples need to learn to “feel comfortable having small families” so that pollution can be curbed. When asked about what could be done to address population growth, he said:


“One of the things we could do about it is to change the technologies, to put out less of this pollution, to stabilize the population, and one of the principle ways of doing that is to empower and educate girls and women. You have to have ubiquitous availability of fertility management so women can choose how many children have, the spacing of the children.

You have to lift child survival rates so that parents feel comfortable having small families and most important — you have to educate girls and empower women. And that’s the most powerful leveraging factor, and when that happens, then the population begins to stabilize and societies begin to make better choices and more balanced choices.”

Gore and his wife have four children and, as Tom Nelson and Chris Horner point out, he’s drinking not-so-environmentally-friendly bottled water on the stage. While the latter is certainly petty, it is a reminder of Gore’s massive electric bills that were discovered years ago in the midst of his green rhetoric
THE BLAZE The national debt will exceed the size of the entire U.S. economy by 2021 — and balloon to nearly 200 percent of GDP within 25 years — without dramatic cuts to federal health and retirement programs or steep tax increases, congressional budget analysts said Wednesday.

The dire outlook from the nonpartisan Congressional Budget Office comes as the White House and congressional leaders are locked in negotiations aimed at cutting spending and stabilizing future borrowing. The CBO report highlights the enormity of that task and the immense difficulty of paying off the debt, given an aging population and soaring health-care costs.

Over the long term, the CBO said, a projected explosion in government spending outside interest on the debt is “attributable entirely” to the ballooning cost of “Social Security, Medicare, Medicaid, and (to a lesser extent) insurance subsidies” intended to help finance coverage for the uninsured under President Obama’s new health-care law.

“The health care programs are the main drivers of that growth,” the CBO said, responsible for 80 percent of the projected rise in spending on those programs over the next 25 years.

Tax collections could keep pace with those costs if Congress permitted the George W. Bush tax cuts to expire on schedule in 2012 and allowed the alternative minimum tax to hit millions of additional households, the CBO said. But under current tax policies, the CBO said, tax collections would barely cover the cost of the health and retirement programs alone by 2035.

“If policymakers are to put the nation on a sustainable budgetary path, they will need to let revenues increase substantially as a percentage of GDP, decrease spending significantly from projected levels, or adopt some combination of those two approaches,” the CBO report said.

The report cautions that taking either action now “would probably slow the economic expansion. However, the sooner that medium— and longterm changes to spending and revenues are agreed on— and the sooner they are implemented after the period of economic weakness — the smaller will be the damage to the economy from rising federal debt.”
And the economic damage of inaction could be huge, the CBO said. If current policies are unchanged and the national debt continues to grow, the U.S. economic output could be as much as 6 percent smaller than current projections by 2025 and as much as 18 percent smaller by 2035.

Despite the growing danger, both major political parties have declared their resistance to the types of policy changes that would be necessary to rebalance the federal budget, at least as part of the debt-reduction talks currently under way between Vice President Biden and six lawmakers from both parties.

Democrats have ruled out major changes to health and retirement programs, while Republicans have ruled out any increase in tax revenue, a position Senate Minority Leader Mitch McConnell (R-Ky.) emphasized Wednesday.

“I think I can safely say, this Congress is not going to raise taxes, so why are we still talking about it?” McConnell told reporters at a breakfast hosted by the Christian Science Monitor. “So, look, taxes aren’t gonna be raised.”
Washington Post

I thought they were enemies .... then I wonder who won the war?

The British government was reported last night to have been in negotiations with the Taleban.
In an interview, the Foreign Secretary William Hague is reported to have said: "Talks do happen. We've worked hard behind the scenes."

Mr Hague also held talks with Afghan president Hamid Karzai as part of a surprise visit to the country. He said the UK's involvement in Afghanistan would continue for "many years" after the withdrawal of troops.

"Now there is more to do in the areas of security and reconciliation, in building up economic success and fighting corruption," he said.

The news came as Prime Minister David Cameron was last night under growing pressure to speed up the drawdown of British forces from Afghanistan, as an announcement was due from the United States of its exit plan from the country.

Mr Obama was expected to say that some 10,000 US troops will leave Afghanistan this year. Half that number could go next month, and half in the winter.

Mr Obama was also due to give an indication of when the other 20,000 personnel who were part of the "surge" strategy implemented in December 2009, would be withdrawn.

The path to ending the active role played by the US by 2015 was due to be set out in a televised presidential address. Military commanders on both sides of the Atlantic have suggested they want the timetable for extracting forces to be slower.

In an interview recorded for a BBC2 television documentary Afghanistan: War Without End?, broadcast last night, Britain's top soldier General Sir Peter Wall stressed the army was "committed" to the 2015 deadline for ceasing combat operations. But he added: "Whether or not it turns out to be an absolute timeline or more conditions-based approach nearer the time, we shall find out".

Gen Wall was also asked if he accepted that many of the "hearts and minds" of Afghan civilians had in fact been lost, instead of won over by the army. He replied: "Undoubtedly. Yeah, undoubtedly. I accept that."

He said he did not believe that the Helmand mission had changed from the reconstruction plan set out by John Reid five years ago.

Speaking on the same programme, the Prime Minister insisted there would be no movement from the 2015 deadline. "The deadline is a deadline, and it won't slip because I'm very clear that the British people deserve to have a clear end point," he said. Mr Cameron has said 450 British personnel will leave Afghanistan this summer, but there have been widespread calls for that number to be increased.

A spokesman confirmed there had been "conversations" with the US, but added: "They are making an announcement on troop numbers which will be informed by their reading of conditions on the ground."


Sicilians are not normally renowned for their punctuality but something strange is afoot that’s making them turn up early for work.

Hundreds of digital clocks on the island are running more than 15 minutes fast and no-one is quite sure why. The phenomenon has left people scratching their heads for weeks and several theories have been put forward involving aliens, poltergeists, volcanic activity on Mount Etna and solar explosions. Armageddonists are pointing to further proof of the imminent end of the world.

The town of Catania lies at the heart of the mystery and two young locals have set up a facebook page calling for those affected to come forward. One of them, Francesco Nicosia, told French online magazine Rue89 “I realised something was wrong when I started getting to work earlier. After some investigation I noticed that I wasn’t the only one who was on time, which is quite rare here in Sicily.”

Among the most credible explanations is electrical disturbance caused by underwater cables that have been undergoing maintenance, but that hasn’t stopped many who think that the whole thing is a conspiracy to punish Sicilians for their tardiness. 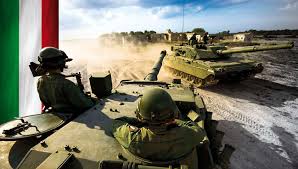 Italy broke ranks with Nato yesterday and demanded an urgent halt to hostilities in Libya.

Franco Frattini, the foreign minister in Rome, called for an 'immediate suspension' of military operations to allow humanitarian aid to be brought to the wartorn country.

His demand for a ceasefire echoed comments by Arab League Chairman Amr Moussa on Tuesday.

However, British Prime Minister David Cameron played down calls to stop the mission and said it would eventually reach a 'satisfactory conclusion'.

Nato's mission - to enforce a no-fly zone over Libya to protect civilians from Colonel Muammar Gaddafi's troops - began in March after the tyrant launched a violent crackdown on a pro-democracy uprising.

But despite three months of military action and thousands of airstrikes against Libyan forces the dictator remains in power.

Concerns about the credibility of the mission increased after a Nato missile apparently misfired on Sunday striking a residential area and killing nine people, including two young children.

Speaking to the Italian parliament, Mr Frattini called for 'an immediate humanitarian suspension of hostilities' to allow aid corridors to be set up to relieve stricken citizens in areas around the besieged city of Misrata and Tripoli, the Libyan capital.

He added: 'With regard to Nato, it is fair to ask for increasingly detailed information on results as well as precise guidelines on the dramatic errors involving civilians.
Mail Online

Euro a collapsing prision for Greece

Celente: Everything is not all right

The issue, which has caught the attention of the American Center for Law and Justicealready, was raised when Washington attorney Jeffrey Lovitky was perusing airline procedures for travel.

"As we learn more about the issue and facts, we are determined to ensure that American citizens do not face discrimination by airlines like Delta that are passenger code-sharing with Saudi Arabian Airlines, said Colby M. May, director and senior counsel of the ACLJ.

"We will be communicating our position with members of Congress, the State Department and Delta Air Lines to ensure that the rights of American citizens are protected," he said.

WASHINGTON -- Rep. Darrell Issa on Wednesday called for the U.S. Postal Service to clean itself up to avoid a potential taxpayer bailout, after the broke mail service announced it is suspending its employer contribution to its pension plan.

The post office said it has informed the Office of Personnel Management that the $115 million payment to the Federal Employee Retirement System made every two weeks will be suspended effective Friday. The action is expected to free about $800 million in the current fiscal year. The post office's FERS account currently has a surplus of $6.9 billion, the agency said.

Issa, R-Calif., pointed out that the $800 million in savings doesn't even account for 10 percent of USPS' $8.3 billion deficit last year.

"The United States Postal Service, our nation's second largest employer, is now past the brink of insolvency," said Issa, chairman of the House Oversight and Government Reform Committee.
"This would not be tolerated in a private company. ... USPS needs fundamental structural and financial reforms to cut costs and protect taxpayers from an expensive bailout," Issa said.