"Sounds Of The Apocalypse" Heard In New Jersey

Email ThisBlogThis!Share to TwitterShare to FacebookShare to Pinterest
Labels: Romans 8:22

Would you accept a transfusion of blood products from a chimpanzee or a gorilla? Or what about a pig? One person did back in 1667 when French physician Jean-Baptiste Denis successfully transfused blood from a lamb into 15 year-old human boy. This may surprise many people as most are aware that even humans are not universally transfusion-compatible. Instead, humans are divided into blood groups that determine who can receive blood from whom without suffering a severe immune reaction that can be fatal. That’s because our immune system senses molecules on the surface of red blood cells and reacts aggressively to certain surface molecules, or markers, in an individual whose on red blood cells don’t have the same kind. 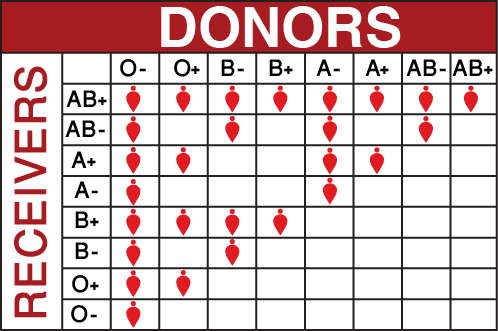 But while there are literally hundreds of different surface markers that make red blood cells different between people, only a handful of markers act as strong antigens to the immune system. The main ones are the ABO and Rh antigens (the positive or negative seen after the more commonly known A, B, O types) and for people to receive blood products they must be appropriately ABO and Rh matched. It turns out, however, that the ABO and Rh blood groups are not limited just to human populations. They also apply to our close relatives in the animal kingdom, especially other primates. Indeed, Rh stands for rhesus, because it was identified on the red blood cells of rhesus monkeys before it was found on human red blood cells.

All of this means that a human can be ABO and Rh matched for blood products from a monkey, or even better, a great ape such as a gorilla or chimpanzee (who are closer to us on the evolutionary tree than monkeys). And, since the ABO and Rh antigens are the most critical factors to match to avoid fatal transfusion reactions, it means that xenotransplantation from an ape is feasible theoretically. But some hurdles may exist to making it a reality.

Drawbacks to ape blood and benefits of using pigs

Work with blood and non-human primates goes back to Karl Landsteiner, who not only co-discovered the rhesus factor in monkeys in 1937, but also discovered the ABO groups in 1900. The blood group commonality between humans and other animals thus is not a new revelation, but this raises question of why xenotransfusion was not seriously decades ago.

One reason is because, despite ABO and Rh commonality, there are minor differences between the blood of humans, apes, and other animals whose effects on transfusion would have to be understood completely. Humans also may still have some lingering superstitions about blood from non-humans that make xenotransfusion unpalatable. Also, when it comes to great apes, they are endangered. They’re not like cows and pigs that simply are bred in industrial quantities to serve humans. So, even while it might be no more trouble for an ape to donate blood than for a hen to lay eggs, the supply of ape blood would be fairly small anyway.

Thus, as we consider xenotransfusion pigs might actually be a more feasible option, and in fact that’s what’s happening. Xenotransfusion research currently focusses on pigs, not apes, and it’s not just because pigs are abundant. They’re blood actually is quite similar to human blood. The size of red blood cells is similar. So is the typical red blood cell life span, the hemoglobin content and structure, and other factors, plus pigs can be genetically modified to produce red blood cells that are equivalent to human type O negative. As noted earlier, that’s the universal donor blood, and this makes xenotransfusion sound very attractive, although, other ways to make O negative blood also beckon.

https://www.geneticliteracyproject.org/2016/01/25/ape-human-pig-human-blood-donations-xenotransfusions-work/
Posted by Unknown at 7:00 AM No comments: Links to this post

In March, Saudi Arabia’s air campaign in Yemen will enter its second year.
Riyadh began flying combat missions last year in an effort to rollback the Iran-backed militiamen who drove Yemeni President Abd Rabbuh Mansur Hadi into exile. The results of the strikes have been mixed. The Houthis were driven from Aden but the fight for Sana’a is far from over.
And while the Saudis and the Houthis battle it out, ISIS and al-Qaeda are doing what they do best: finding opportunities amid the chaos. Just today for instance, ISIS claimed responsibility for a car bomb that exploded outside of Hadi’s residence in Aden. Hadi was unharmed but six people were killed in the attack.
As you might recall, the Saudis have a rather checkered human rights record. Earlier this month, the kingdom carried out its largest mass execution in 25 years, killing 47 in what Riyadh pitched as a crackdown on “terrorists.”
That rather blatant disregard for human life has carried over into the air campaign in Yemen.
As we’ve documented extensively, Riyadh’s warplanes have "accidentally" hit everything from MSF hospitals to wedding parties and just last week, we brought you the following footage of what Yemen Health Ministry spokesman Dr. Nashwan Attab called a “heinous massacre” involving an ambulance and rescue workers.
Now, a 51-page report from a UN panel of experts on Yemen has revealed "widespread and systematic" attacks on civilian targets by Saudi planes.
The report (which was obtained by The Guardian) says the following:

“The panel documented that the coalition had conducted airstrikes targeting civilians and civilian objects, in violation of international humanitarian law, including camps for internally displaced persons and refugees; civilian gatherings, including weddings; civilian vehicles, including buses; civilian residential areas; medical facilities; schools; mosques; markets, factories and food storage warehouses; and other essential civilian infrastructure, such as the airport in Sana’a, the port in Hudaydah and domestic transit routes.”

And it gets worse:

“Many attacks involved multiple airstrikes on multiple civilian objects. Of the 119 sorties, the panel identified 146 targeted objects. The panel also documented three alleged cases of civilians fleeing residential bombings and being chased and shot at by helicopters.”

The coalition’s targeting of civilians through airstrikes, either by bombing residential neighbourhoods or by treating the entire cities of Sa’dah and Maran as military targets, is a grave violation of the principles of distinction, proportionality and precaution. In certain cases, the panel found such violations to have been conducted in a widespread and systematic manner.”

“Alongside ground-led obstructions to humanitarian distribution, the panel documented 10 coalition airstrikes on transportation routes (both sea and air routes), four road supply routes and five storage facilities for holding food aid (including two vehicles carrying aid and three warehouses and facilities storing food), along with airstrikes on an Oxfam warehousestoring equipment for a water project funded by the European Union in Sana’a. The panel also documented three coalition attacks on local food and agricultural production sites.”

So let's see if we've got this straight. Over the course of 119 discrete sorties, Saudi Arabi bombed refugee camps, weddings, civilian cars, buses, people's homes, hospitals, schools, mosques, residential neighborhoods, an Oxfam warehouse, treated "entire cities as military targets," and chased after fleeing civilians with attack helicopters.
Not to put too fine a point on it, but that's laughably bad - it's just about the most egregious account of human rights abuses one could possibly imagine.
"Human rights groups and the Labour leader, Jeremy Corbyn – who described the leaked report as disturbing – called for an immediate inquiry and a suspension of arms sales to Saudi pending its outcome," The Guardian notes, adding that "UK arms sales to Saudi Arabia totalled £2.95bn for the first nine months of 2015, and about £7bn since Cameron took office, including a contract for 72 Eurofighter Typhoon jets."

Of course it's not just Britain arming the Saudis.
In December, the US State Department approved $1.29 billion in arms sals to Riyadh including 13,000 precision guided weapons.
According to the kingdom, those weapons will help the Saudis avoid collateral damage. "We used precision bombs in the beginning, but the stocks dwindled and we got no resupply," NPR quotes a Saudi businessman with links to the royal family as saying. "We know we have a problem, but we must prosecute the war."
"You can imagine them saying to everybody that is criticizing them, 'Look, if we have better weapons, there will be less casualties,' " Ford M. Fraker, president of the Middle East Policy Council and a former U.S. ambassador to Saudi Arabia, said last month. "I think that is probably correct, but I think the whole issue of [collateral damage] is not one you are going to eradicate."

No it isn't. Especially not when the Saudis are shooting at civilians.