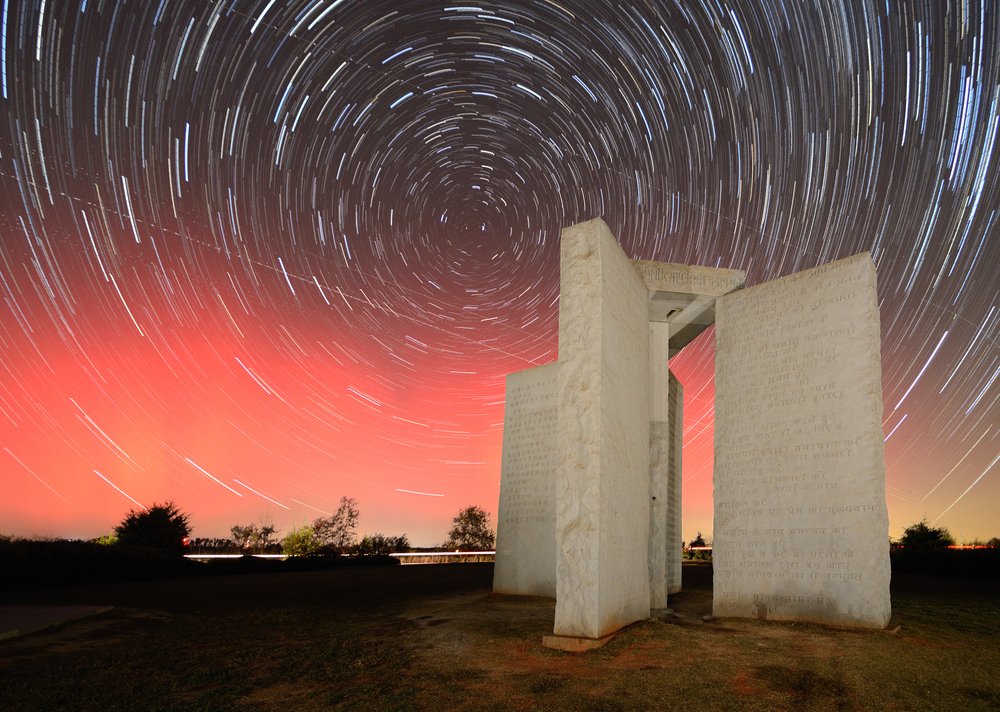 SkyWatchTV’s Derick Gilbert is joined by Chris Pinto, founder of Adullam Films who discusses his new documentary about the Georgia Guidestones called “Dark Clouds Over Elberton,” where Pinto discloses they have discovered the secret identity of the mysterious “R.C. Christian,”… the man behind the construction of the Guidestones. In part one and part two of the interview below, Pinto describes how they uncovered the identity of R.C. Christian, his connections to the Eugenics and depopulation agenda, how this all fits in with bible prophecy, the elites’ plan for a “global government,” and more. Pinto also explains why the Georgia Guidestones are referred to as the 10 commandments of the antichrist, as well as connecting them  to events and statements we are hearing pushed by the elites in the present day. Key quote from Pinto –  “To me that’s the most disturbing part of the monument, is it seems to call for the abolishment of Christianity, and we’re seeing such a war on Christianity in the world today.”

Credit toTom Horn
http://skywatchtv.com/2015/09/17/secrets-of-the-georgia-guidestones-identity-of-founder-confirms-sinister-message-of-the-10-commandments-of-the-antichrist/
Posted by Unknown at 11:00 AM No comments: Links to this post

What Happens If the US and China Clash in the Pacific?


As the United States continues provocative actions the South China Sea, it’s worth asking: What would happen in a hypothetical military confrontation between Washington and Beijing? A new report from the nonprofit RAND Corporation compares the capabilities of the two countries in 10 separate fields.

The recently released 430-page report written by 14 scholars on military strategy focuses strictly on military might. Ignoring political policy issues, "US-China Military Scorecard: Forces, Geography, and the Evolving Balance of Power, 1997-2017" considers two hypothetical scenarios – a Spratly islands campaign and a Chinese invasion of Taiwan – to gauge which side would win. While the Chinese military had only a handful of short-range ballistic missiles in 1997, that number has now risen sharply. With nearly 1,400 in Beijing’s arsenal, those missiles could easily cripple the Kadena Air Base, a US installation on the island of Okinawa.

"Committed attacks might close a single base for weeks," the report reads, and that could dramatically increase the distance that the US Air Force would be required to travel. Forcing the US military to operate out of Alaska, Guam, or Hawaii could give China more time to react to offensive maneuvers.

US vs. Chinese Air Superiority

Beijing has seen a rapid improvement in its air force, modernizing half of its fighter jets. According to RAND, the two nations’ capabilities in the air are almost comparable, with a slight advantage given to the US.

Still, in protecting Taiwan during a hypothetical invasion in 2017, "US commanders would be unable to find the basing required for US forces to prevail in a seven-day campaign," the report reads. While the US could gain an advantage if it drew out such an operation into a longer campaign, that action could also put ground and naval troops at a greater risk.

The Chinese military has added a large number of surface-to-air missile (SAM) systems since 1997. With nearly 200 now in Beijing’s arsenal, as well as improved air detection systems, US aircraft would have a difficult time operating in the Taiwan scenario, given its proximity to the Chinese mainland and those defenses.

In a Spratly scenario, however, US stealth aircraft could gain the upper hand, given the archipelago’s 800-mile distance from the Chinese mainland.

US Air Base Attack

American long-range weapons could give the US the capability to shut down Chinese air bases. Looking at 40 bases within range of Taiwan, the US would be capable of closing airstrips for approximately eight hours. Adjusting for 2017, those closures could last for two to three days.

Still, the report acknowledges that this advantage relies on a limited missile stockpile.

"While ground attack represents a rare bright spot for relative US performance, it is important to note that the inventory of standoff weapons is finite, and performance in a longer conflict would depend on a wider range of factors," the report reads.

(NaturalNews) Slowly but surely, traditional American culture and values are being swept away by liberal, progressive activists and culture warriors who actively encourage a break from our past, even if they don't say so directly.

The latest example of this dramatic cultural shift comes from coffee icon Starbucks, whose CEO and founder recently told customers and shareholders who happen to believe in the historical nature of marriage as a construct between one man and one woman to stay out of his stores.

At the company's annual meeting in Seattle recently, CEO/founder Howard Schultz was challenged by a shareholder who questioned his well-publicized position of supporting gay marriage and last year's support of a referendum in Washington state backing same-sex marriages. Schultz's position led to calls to boycott Starbucks from the National Organization for Marriage, and the shareholder explained that led to lower-than-expected earnings.


Credit to NaturalNews.com
http://www.naturalnews.com/051205_Starbucks_gay_marriage_Howard_Schultz.html#ixzz3m0L5mjea
Posted by Unknown at 9:00 AM No comments: Links to this post

Gallups identifies specific incidents when civil society collapsed, most notably in New Orleans immediately following Hurricane Katrina.
“You ended up with the worst of both worlds,” Gallups observed. “You had widespread criminality, anarchy and disorder, and somehow, at the same time, you had government officials going around enforcing wildly tyrannical guidelines and even confiscating firearms.”
As a result, Americans may be forced to rely on themselves for protection, meaning Christians have to begin planning now.

Even if it doesn’t happen next month, life in America is about to change dramatically.
The infrastructure and government services that we have all come to take for granted may not be there in the future.
It is imperative that we all start to learn how to become more independent of the system, because the system is going to start failing in thousands of different ways.
So what do you think?
Do you believe that something significant is going to happen next month?
Credit to End of the American Dream
Posted by Unknown at 8:00 AM No comments: Links to this post

When they say PEACE and security...

you have to consider that day is also the satanic day of mason......

As we have repeatedly stated, the Satanist believes that numbers contain inherent power.

Thus, they literally order their lives by occult numerology - such numerology also is a key component in astrology, another system of divining that Satanists observe very closely. The occult calendar is divided into four (4) segments of 13 weeks each.

The number, "13" is considered divine by the occultist for a couple of reasons:

The Bible assigns '13' the meaning of "rebellion against constituted authority", plus the depravity that caused Satan to rebel against God.

Thus, the occult calendar is comprised of four periods of 13 weeks each. We list these periods for you, below.

2. Spring Equinox - 13 weeks - Minor sabbath but does require human sacrifice
a. March 21-22 - Goddess Ostara - Note: Easter is the first Sunday after the first new moon after Ostara. March 21 is one of the Illuminati's Human Sacrifice Nights
b. April 1 - All Fool's Day, precisely 13 weeks since New Year's Day!
c. April 19 - May 1 - Blood Sacrifice To The Beast. Fire sacrifice is required on April 19.
d. April 30 - May 1 - Beltaine Festival, also called Walpurgis Night. This is the highest day on the Druidic Witch's Calendar. May 1 is the Illuminati's second most sacred holiday. Human sacrifice is required

3. Summer Solstice - 13 weeks - When the sun reaches its northernmost point in its journey across the sky
a. June 21 - 22 - Summer Solstice
b. June 21 - Litha is one of the Illuminati's Human Sacrifice Nights
c. July 4, America's Independence Day, is 13 days after Day of Litha and 66 days from April 30
d. July 19 - 13 days before Lughnasa
e. July 31 - August 1 - Lughnasa, Great Sabbat Festival. August - One of the Illuminati's Human Sacrifice Nights