Earlier today, Paul Joseph Watson posted the following epic video in which he systematically destroys the utter hypocrisy of the left for, among other things, failing to denounce the violent riots flaring up across the country in response to Trump's victory.  The whole video is a must see but below is just a small selection of our favorite quotes:

"After weeks of taunting Trump supporters, over Trump's suggestion that he might not immediately accept the election results, Hillary voters came together preached the message of unity and graciously accepted Donald Trump's victory.  Oh no, they actually rioted, attacked people in the street and threatened to kill Donald Trump and his supporters."

"All year they denounced us as being hateful and intolerant.  And what's the first thing they do after the election?  Engage in rampant hateful intolerance."

"Seriously, has anyone told you people you can't change the outcome of democratic election by throwing a temper tantrum."

"Your behavior is why Trump won in the first place.  Do you understand that yet?" 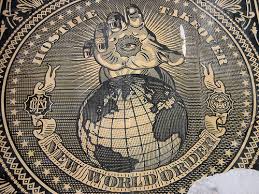 There are powers bigger than just the president, and as SHTFPlan.com's Mac Slavo writes, Trump is under a lot of pressure right now to take advice from people who represent the deepest and darkest interests at work in foreign policy. America will be undergo a tremendous test in the next term, as terrorism, war, a divided population and the global economy all threaten to explode on his watch, leaving the situation open to exploit by the advisors and appointees of the Deep State, and the secret societies that create and steer world affairs.

After decades as a billionaire businessman, Trump is finally playing ball in the big leagues, and that means some very serious characters at work in and around his office of power.

If Trump thinks he’s now the big boss, he’d better be very careful and watch his back. History has a lot to say about JFK’s assassination – because it concerns his attempt to oust the shadow powers from his administration.

Ron Paul on Trump’s Election: Beware of the Shadow Government

Originally published at The Daily Sheeple.
Former congressman and presidential candidate Ron Paul appeared on RT to talk about the election of Donald Trump as president, and he voiced major skepticism on whether Trump will actually follow through on many of his campaign promises.


Paul referenced Trump’s independence as being a political outsider and that this possibly could have a more favorable outcome than we might have seen with Hillary Clinton in the Oval Office. However, he notes that we cannot determine what plans for Trump’s presidency the shadow government might have. Speaking of this secret power structure, he said:

Paul is not particularly pleased with the war-driven neoconservatives who are beginning to surround Trump. “Unfortunately, there has been several neoconservatives that are getting closer to Trump. And if he gets his advice from them then I do not think that is a good sign,” he said. “During the campaign, he did talk a little bit about backing off and being less confrontational to Russia and I like that. He criticized some of the wars in the Middle East at the same time. He believes we should accelerate the war against ISIS and terrorism.”
Paul thinks that the Wikileaks release of the nearly 60,000 hacked Podesta emails is what ultimately secured Trump to the presidency, but he thinks that the hidden power structure is brewing something in the background to maintain their dominion over the US presidency. “Yes, Trump is his own guy, more so than most of those who have ever been in before. We hope he can maintain an independence and go in the right direction. But I fear the fact that there is so much that can be done secretly, out of control of our apparent government and out of the view of so many citizens,” he cautioned.
Paul does not have high hopes that Trump will follow through on his campaign promise to disengage from the NATO alliance. He expects that Trump’s intentions as president will become clear once we see who he appoints to his cabinet.
Credit to Zero Hedge

This article examines whether recent “upset events” like Trump’s win and the Brexit can help us identify whether a Jubilee is here.
Remember! Jubilee is the largest systematic social reconstruction tool in the Bible, short of the inauguration of Messianic rule at the end of the age. It is a divine reset of the land every 50th year, that gives the poorest of the land a chance to restart their lives in a new direction. Slaves are set free. People who have sold, given away, and even been tricked out of their most precious possession—their own land—get it back.
In the economies of ancient times, it was not God’s but man’s “golden rule” that always prevailed: those who have the gold make the rules. Thus the rich and powerful made sure that they could stay that way (short of a populist revolt), and the poor were managed and frequently abused by their rulers in a way that would skew ever more of the available resources to those at the top.
But the Jubilee was God’s invention to systematically and periodically uproot this human tendency, giving every family of the earth the chance, at least once in their lifetimes, to be part of a grand reset: to move in a new direction and gain economic success.
image: http://www.breakingisraelnews.com/wp-content/uploads/2016/11/reset-icon-1.jpg