Middle East, Europe Will Be Swallowed in War of Gog and Magog, Warns Mystic Rabbi

“And it shall come to pass afterward that I will pour out My spirit upon all flesh; and your sons and your daughters shall prophesy your old men shall dream dreams your young men shall see visions.” Joel 3:1 (The Israel Bible™)

Just a few days prior to the Jewish New Year, Rabbi Nir Ben Artzi, a noted kabbalist with thousands of followers in Israel, has revealed a divine redemptive plan for the world which will see Europeoverrun with Muslims, Syria’s chaos spilling into the West, the US elections spelling disaster for American Jews, and Israel’s importance becoming greater than ever.

But the end result of all this strife is closer, and more rewarding, than anyone can imagine: Messiah.

“Everyone is ready, waiting for the public revelation of the Messiah!” the rabbi last week began a post on his webpage. “Everyone understands and knows that the Messiah is active right now,” he wrote, noting that all of the world events this year are merely preludes
hinting at what will come

Rabbi Ben Artzi, an Israeli rabbi who gained followers after rumors began to circulate of his prescient abilities in his youth, warned of the impending messianic war of Gog and Magog, which he said is a part of a spiritual process becoming clearly visible in the Middle East.

“God is creating Gog and Magog, a situation of tohu vavohu (unformed and void, confusion) in the entire world, in order that the Jews will understand that there is Redemption and Messiah, and that it is God protecting the Holy Land,” the rabbi said.

The chaos of the coming redemptive war is already spreading, he continued, pointing to Syria as evidence and predicting that it is just the beginning.

“Syria will continue to be wiped out. It is a wasteland, harming countries who try to intervene there,” he said, explaining that America and Russia would end up getting burned by their interference in the quagmire. “They are only engaged in blowing it up entirely, harming themselves in the process.

“Even Syria is intent on killing itself. In the end it will be a wasteland that grows, affecting everyone who comes near.”

The rabbi quoted Psalms to describe what is happening now in Syria:

Their sword shall enter into their own heart, and their bows shall be broken. Psalms 37:15

Indeed, claiming humanitarian intent, the world’s superpowers have only succeeded in creating more destruction in Syria and bringing their own countries closer to war. The situation has already led to confrontations between Turkey, a NATO member and US ally, and Russia, with a resurrected and aggressive military.

The war will have massive and terrifying international implications, including refugee crises, Rabbi Ben Artzi continued, warning that the Syrian refugee situation in Europe today is only a small prelude to what will be. He predicted that a revolution in Turkey would send “tens of millions” of refugees from the Muslim country to Europe.

Then, he said, “Europe will become a Muslim continent and people will flee from there like from a fire.”

The ongoing Islamification of Europe is already a critical issue faced by European leaders who, after welcoming hundreds of thousands of Muslim refugees into their countries last year, saw a shocking spike in radical Islam and terror attacks. Bombings, stabbings and shootings left hundreds dead across the continent.

Rabbi Ben Artzi also touched on the US presidential elections in his talk, including an unusual warning to American Jews.

“In the upcoming elections it is important to remember that the next president will be the one that God chooses,” he insisted. “They can say what they want, do what they can, but the one who will be elected is the one who loves the Jews in Israel but hates the Jews in America. That is the big surprise that will happen.”

Indeed, Israel figures large in world events, as “the entire world is sustained on the merit of Israel,” the rabbi announced.

The rabbi warned in no uncertain terms, “Anyone who touches Israel will disappear from the world. They will immediately get hit with earthquakes, floods, fires, and storms. Hamas and the Palestinians have so much, but since they don’t leave Israel in peace, in the end they will be left with nothing.”

Interestingly, in June, just as world leaders were stepping out of a meeting in Paris concerning a French-led initiative to force Israel to create a Palestinian State within its borders, rain began to fall and the Seine began to rise. Within 24 hours, Paris suffered its worst flooding in over 30 years.

After his dire predictions, the rabbi concluded with encouraging comments on the imminent arrival of the Messiah.


“Everyone, including those no longer alive, including the matriarchs and patriarchs, are waiting for the Messiah, and everyone knows it is imminent. But the exact date is only known by God,” Rabbi Ben Artzi stated. “All of the difficulties that come on Israel while they are waiting are meant to purify them, bringing the time for the revelation of the Messiah even closer.”

How to Survive When You Run for Your Life: Bob Griswold and Dave Hodges Survival expert, Bob Griswold, long considered one of the top prepping authorities in the world, educated Dave’s audience on Sunday evening on how to bug out and survive.
Credit to Common Sense

News of a 10-mile-wide killer asteroid hurtling toward Earth burned up the internet this week after a Chinese astronomer announced that the massive space rock could potentially impact the planet with enough force to cause an extinction event.

But there is worse news: Although asteroid 2009ES, the designation of the aforementioned killer asteroid, is currently predicted to make a near-miss pass by the Earth, there are other killer asteroids hurtling through space with the potential to become impactors. And experts believe one will pass closer than half the distance to the Moon less than 13 years from now.

The Daily Star broke the story of asteroid 2009ES, a massive chunk of space rock that astronomers admit to not having an accurate assessment of its trajectory through the solar system. Currently, it is estimated that the potential killer asteroid will pass to within 18.8 lunar distances (the distance from the Earth’s center to the center of the Moon) of our planet. That estimate will be almost certainly be altered as new tracking information becomes available.

Zhao Haibin, an astronomer with the Purple Mountain Observatory in Nanjing, China, using China’s largest telescope, tracked and photographed 2009ES to get the latest estimate. In an interview with the Daily Star, Haibin noted that using instruments like the 1.2-metre Schmidt telescope camera has given astronomers a tool with which to better assess threats to the Solar System.

If it were to impact Earth, experts believe that the killer asteroid would release enough energy to equal 3 billion nuclear bombs.

As Inquistr previously reported, killer asteroid 2009ES is one of the many Potentially Hazardous Asteroids being monitored by NASA and the International Astronomical Union’s Minor Planet Center. At present, there are over 1,640 detected space objects being tracked that come within relative close proximity of Earth.


With Deutsche Bank mercifully missing from overnight headlines for the first day in almost two weeks, it is time to bring attention to Germany's second largest bank which, as we first reported earlier in the week citing a Handelsblatt leak, confirmed it is also going through a historic rough patch. This morning, Commerzbank said it plans a wide-ranging business restructuring that includes scrapping the bank's dividend for the rest of the year, terminating nearly 10,000 jobs - roughly 20% of its workforce - and merging two large units.
“The focus on the core business, with some business activities being discontinued, and the digitalization and automation of workflows will lead to staff reductions amounting to around 9,600 full-time positions,” Germany’s second-largest lender said.
The plan, according to the WSJ, is a strong sign new Chief Executive Martin Zielke is determined to shrink the partially state-owned bank amid a protracted period of ultra-low or negative interest rates and weak client demand.
While the overhaul and liquidity "shoring" was previously reported in recent weeks, it came as a surprise because the bank portrayed the picture of an institute that is done emerging from an extensive overhaul when former Chief Executive Martin Blessing in November last year said he would leave the bank. However, now the bank is merging its investment bank with the unit that caters to small and midsize enterprises. The renewed efforts to streamline Germany’s second-largest bank mark the first moves Mr. Zielke, who took the helm at Commerzbank in May.
There is a silver lining: the 20% headcount reduction will be offset by the hiring of 2,300 new workers as the bank efforts to make workflows more digital.
The bottom line: the restructuring will cost about €1.1 billion ($1.2 billion) and it will book a €700 million loss in the third quarter. It added that it would therefore scrap dividend payments for “the time being.” It paid €0.20 a share in May for 2015, the first dividend since its €18 billion government bailout in 2008, and originally planned to pay a dividend for this year.
Credit to Zero Hedge

The Senate Rejects The President's Veto, The Stage Has Been Set

How Putin exposed the West IMF and World Bank

THE U.N. JUST WARNED THE NEXT GLOBAL RECESSION MAY TRIGGER SOVEREIGN DEFAULT CRISIS 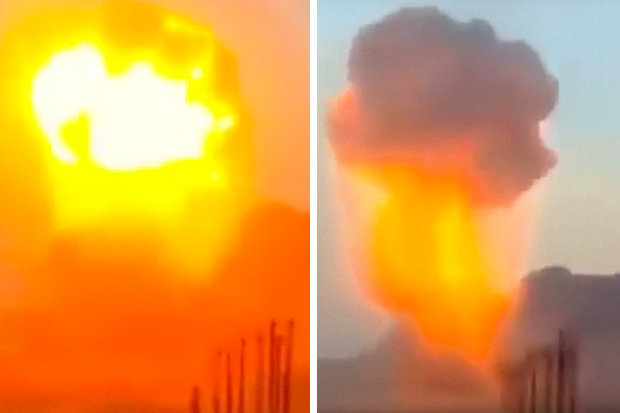 The nightmarish weapons of mass destruction are alleged to have been used by the Russians in their bid to liquidate Syrian rebels, according to reports.

Extraordinary video seen by Daily Star Online shows all the hallmarks of fuel-air bomb which sucks in oxygen and ignites air to create an explosion equal to a small nuclear bomb.

Footage shows an intensely bright flash near a city followed by flaming mushroom cloud which bears eerie similarities to a nuclear bomb blast.

If victims survive being squished or suffocated they face being barbecued alive as air ignites into flames as hot as a nuclear explosion.

A blast wave travelling 10,000 feet per second flattens any survivors with an 100 yard radius.

This is a thermobaric explosion.