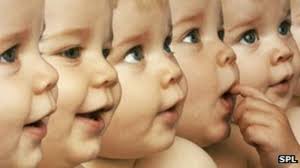 Science has contributed to easing of humans’ problems since its proper understanding in the early 19th century. Without scientific discoveries and breakthroughs the world we see today, the technological advancements, couldn’t have been possible. One of the outcomes of the science that have increased the chances of survival of mankind on this planet is the cloning. Cloning is the process of creating the multiple copies of any living being or object exactly identical to the original parent.
Cloning finds its roots from Hans Spemann’s experiment in 1938 on embryo transplantation. In that experiment, Hans Spemann replaced the nucleus of an egg cell with another nucleus and the embryo that developed was of the organism whose nucleus was replaced in the egg cell. After that experiment, the process of cloning got its start and a major outcome of the cloning process was the isolation of human insulin gene and its multiplication (cloning) to increase its availability to the Diabetic patients with reduced insulin levels in their body.
In animals, the first ever example of successful cloning appeared in the form of Dolly Sheep, that was a clone produced by Dr Keith Campbell of Scotland in 1997 using nucleus from cultured cells of an older sheep. Due to the use of older sheep’s nucleus, Dolly survived only for 6 years and then died in 2003. The Dolly Sheep was a major breakthrough of that year.
Benefits:
Cloning can prove to be beneficial in lots of aspects of the future to the human beings. Currently, the major advantage that mankind is gaining from cloning is the insulin for diabetic patients, cloning of the plant species near to extinction and somewhat the cloning of endangered animals whose absence may cause an imbalance in the ecosystem.
Desired future benefits that a man could gain from cloning are:
This is the technique of harvesting cells from certain vital organs like heart, liver and pancreas etc. For producing exact copies of those organs which could overcome the issues of blood cross-matching may save the person dying from the failure of any of the vital organs.
Clone of the human being, although an impossible approach currently, but once achieved, could create the exact copy of a person so that any organ or lost body part may be replaced by the original person through its removal from the clone.
With this type of cloning somatic cells from male can be isolated, their nucleus would be extracted and then these somatic cells may be inserted in female egg cell. Afterwards, the egg develops into the embryo; the embryo is then implanted in the surrogate mother. The child thus born could have the characters from both the original parents.
Scientists may be able to isolate and harvest the healthy heart cells. These healthy cells could then be injected in the place of the damaged heart cells and in this way heart attack may be prevented.
Human embryonic stem cells may be isolated and harvested to produce organs and tissues for replacing the damaged ones. Skin cells, brain, muscles, kidneys, liver, heart cells, stomach cells could be produced by using cloned stem cells.
All these above-mentioned benefits have not been achieved yet but if this field flourishes more with the efforts of more experts in this field, then some of the above-mentioned benefits may be achieved. Although human and animal cloning is ethically not-so-good, with increasing advancements in this field, it might be possible that in future we encounter our clones.

Credit to http://blogs.dunyanews.tv/
Posted by Unknown at 4:00 PM No comments: Links to this post

China Is Building a Robot Army of Model Workers

Can China reboot its manufacturing industry—and the global economy—by replacing millions of workers with machines?

Above: A robot arm moves circuit boards around for testing inside CIG’s factory in Shanghai. Previously the work was done by hand.

Inside a large, windowless room in an electronics factory in south Shanghai, about 15 workers are eyeing a small robot arm with frustration. Near the end of the production line where optical networking equipment is being packed into boxes for shipping, the robot sits motionless.

“The system is down,” explains Nie Juan, a woman in her early 20s who is responsible for quality control. Her team has been testing the robot for the past week. The machine is meant to place stickers on the boxes containing new routers, and it seemed to have mastered the task quite nicely. But then it suddenly stopped working. “The robot does save labor,” Nie tells me, her brow furrowed, “but it is difficult to maintain.”

The hitch reflects a much bigger technological challenge facing China’s manufacturers today. Wages in Shanghai have more than doubled in the past seven years, and the company that owns the factory, Cambridge Industries Group, faces fierce competition from increasingly high-tech operations in Germany, Japan, and the United States. To address both of these problems, CIG wants to replace two-thirds of its 3,000 workers with machines this year. Within a few more years, it wants the operation to be almost entirely automated, creating a so-called “dark factory.” The idea is that with so few people around, you could switch the lights off and leave the place to the machines. 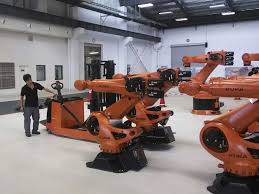 But as the idle robot arm on CIG’s packaging line suggests, replacing humans with machines is not an easy task. Most industrial robots have to be extensively programmed, and they will perform a job properly only if everything is positioned just so. Much of the production work done in Chinese factories requires dexterity, flexibility, and common sense. If a box comes down the line at an odd angle, for instance, a worker has to adjust his or her hand before affixing the label. A few hours later, the same worker might be tasked with affixing a new label to a different kind of box. And the following day he or she might be moved to another part of the line entirely.

Despite the huge challenges, countless manufacturers in China are planning to transform their production processes using robotics and automation at an unprecedented scale. In some ways, they don’t really have a choice. Human labor in China is no longer as cheap as it once was, especially compared with labor in rival manufacturing hubs growing quickly in Asia. In Vietnam, Thailand, and Indonesia, factory wages can be less than a third of what they are in the urban centers of China. One solution, many manufacturers—and government officials—believe, is to replace human workers with machines.

US WARNS RUSSIA: NEXT TIME YOU BUZZ OUR SHIPS ‘IT MAY NOT END WELL FOR YOU’ “They” will hear us even more clearly thanks to the fact that former Google CEO, now the head of Google’s parent company, Alphabet,  Eric Schmidt has been appointed to run Pentagon on surveillance Defense Secretary Ash Carter announced his intention to establish what he’s calling a Defense Innovation Advisory Board, meant to provide advice to the Department of Defense from a Silicon Valley point of view. Carter’s lead choice to head up this new board is no stranger to violating electronic privacy. Carter’s choice is former Google CEO, Eric Schmidt.
An unnamed Google source told me I was making “much ado about nothing”. Really? Nothing? Schmidt is presently the executive chairman of Google parent company Alphabet, as well as a tech adviser to the president of Google.
There is no doubt that these moves were made to avoid the public appearance of impropriety. As Google technology moves to supersede existing technology, Schmidt, still bolstered by his present Google retirement stock will be there to guide America’s obliteration of the Fourth Amendment, to the financial benefit of Google and to the detriment of our cherished Bill of Rights.

Google makes a record of where you visit on the Internet. Therefore, when you log on next time, you see an ad on your screen related to a recent visit. Will there ever be any limits to spying on the American people, from our out of control tyrannical government with Google running the Pentagon’s cyber security? With innovations, such as Google Glass, the American public cannot even begin to imagine how much more our civil rights will be compromised with the technological innovations that will surely be coming our way. And with Eric Schmidt, with his financial interests in Alphabet (aka Google), will there be less or more incentive to violate the Fourth Amendment Rights of Americans?
Isn’t it interesting that not one word about all the Fourth Amendment violations has been uttered in the Presidential debates?
Credit to Common Sense

Future Trends And Why Gold Is Going To Go Up

A FINANCIAL MONSTER IS NOW AMONG US.

England Bans Its Own Flag to Avoid Offending Muslims

While it has amounted to nothing more than mere populist posturing and jawboning, with the occasional entertaining (fabricated) clip of a submarine missile launch thrown in for good measure, North Korea's launches of ballistic missiles have succeeded in provoking anger among the international community, which has so far been unable (or unwilling) to provide an adequate response to Kim Jong Il's periodic "shows of strength", mostly for domestic consumption.
However, Obama now appears ready to respond. In an interview with CBS' Charlie Rose, Obama described the regime as "a massive challenge."
"Our first priority is to protect the American people and our allies, the Republic of Korea, Japan, that are vulnerable to the provocative actions that North Korea is engaging in," Mr. Obama said.
He said North Korea is "erratic enough" and the country's leader, Kim Jong Un, is "irresponsible enough that we don't want them getting close."

"But it's not something that lends itself to an easy solution," Mr. Obama said. "We could, obviously, destroy North Korea with our arsenals. But aside from the humanitarian costs of that, they are right next door to our vital ally, Republic of Korea."
So how is Obama preparing to fend off threats from North Korea? It appears that the US will set up a missile defense system to surround North Korea and shoot down any future flying nuisances.
"One of the things that we have been doing is spending a lot more time positioning our missile defense systems, so that even as we try to resolve the underlying problem of nuclear development inside of North Korea, we're also setting up a shield that can at least block the relatively low-level threats that they're posing right now," Obama said.