"The surface to air-missile regiment of the Ivankvsky Airborne Forces division is the first to have started receiving and studying the modern system of air defense battle," Meshkov said.

The systems automatically provide information on the air environment, fix the target and command a strike against the target within several seconds. "This gives time to an AA sniper armed with the Verba MANPADS to prepare for the meeting and hit the target beforehand," he said.

These systems exclude the human factor, while saving ammunition and increasing the effectiveness of air-defense sub-elements. "An automated control system over the battle allows finding an air target, defining its characteristics and sharing targets between AA snipers and fire means, taking into consideration their location," Meshkov said.

"Until now, the control over air defense battle in Airborne Forces divisions was not automated and the time elapsed following the major commander finding the target and ordering an AA sniper to launch the missile took from 3 to 5 minutes," he said.

The process has become more than 10 times faster with the new systems.

Credit to RIA Novosti
Posted by Unknown at 4:00 PM No comments: Links to this post

US FOOD INFLATION RUNNING AT 22%

After five years of the federal government telling the public that despite a $3.5 trillion increase in monetary expansion, the inflation rate is below +2%, the Department of Agriculture (DOA) just warned the American public that the consumer price index for food is up by 10% this year.

The DOA tried to blame food inflation on the drought conditions in California, but last year’s drought was worse and food prices fell by -6%. The real problem is Federal Reserve monetary stimulus is stimulating inflation. I reported in "Food Price Inflation Scares the Fed” two months ago that commodity food costs were exploding on the upside. Given the lag in commodity costs impacting prices on grocery store shelves, annual U.S. food inflation is now running at +22% and rising.


Credit to blacklisted News
Posted by Unknown at 3:00 PM No comments: Links to this post


The collapse of the monetary system awaits the world in the near future, says financial expert James Rickards. Russia and China's desire to rid the US dollar of its global reserve currency status is an early sign of the “increasingly inevitable” crisis.

“China has three trillion dollars, but they are buying gold as fast as they can. China worries that the US is going to devalue the dollar through inflation so they want to have a hedge if the dollar goes down, so the gold will go up,” Rickards told RT.

As one of the key events in support of his forecast, Rickards points to the words uttered by Russian President Vladimir Putin at the 18th International Economic Forum in St. Petersburg that took place earlier this month.

“Putin said he envisions a Eurasian economic zone involving Eastern Europe, Central Asia, and Russia. The Russian ruble is nowhere near ready to be a global reserve currency, but it could be a regional reserve currency,” he said, as quoted by ETF Daily News.

Rickards’ book about the demise of the dollar was released in April under quite an apocalyptic name – 'The Death of Money.' However, the author is surprised that the events are unfolding much faster than he predicted.

“If anything, the tempo of events is faster than expected. Therefore, some of these catastrophic outcomes may come sooner than I wrote about.”

Last Wednesday, China and Russia signed a historic US$400 billion gas deal which will provide the world's fastest growing economy with the natural gas it needs to keep pace for the next 30 years. Experts say this could be the catalyst that dethrones the greenback as the world's reserve currency.


The best-selling author writes that the “linchpin” of the collapse is the approaching failure of the dollar since it is at the foundation of the system. Powerful countries such as Russia, China, Iran, and India do not rely on the US in their national security and would benefit from the US economy being weaker, thus desiring to break free from the dollar standard.

He elaborates that the dual collapse “looks increasingly inevitable.”

“The mistakes have already been made. The instability is already in the system. We’re just waiting for that catalyst that I call the snowflake that starts the avalanche,” he said, as quoted by ETF.

There are three big international factors that are pressuring the dollar right now – Russia, China, and Saudi Arabia.

“Since the 1970s, Saudi Arabia [has been] the leader in what’s called the petrodollar. It basically means that Saudi Arabia and, by extension, OPEC, price oil in dollars, so the world market is in dollars.

“Russia is a major natural resource exporter; they price their exports in dollars as well. But Russia now is engaged in a financial war with the US around the issues in Crimea and Ukraine.”

The threats to the dollar are “ubiquitous,” the author states in his book. The only way the US can pay off its $17 trillion debt is with inflation, which would drive other countries away from the dollar while the accumulation of gold by Russia and China presages the shift to a new reserve asset.

“The next time we will have a liquidity crisis in the world it’s going to be bigger than the ability of central banks to deal with it. The IMF will basically have to bail out the world by printing the SDRs (an international reserve asset created by the IMF in 1969 to supplement its member countries' official reserves). By that time, you will see the SDR emerge as the new global world currency,” Rickards told

RT.
Posted by Unknown at 2:00 PM No comments: Links to this post

BLOOD ON THE ALTAR part Number 4

Iranian commander says collapse of US empire is near 
The deputy commander of Iran’s Revolutionary Guard, Brig.-Gen. Hossein Salami said that the US’s status in the world has deteriorated and that its collapse is near.

“Today nowhere in the Muslim world” does anyone pull out “a red carpet for American officials and that’s why [US President Barack] Obama secretly” showed up at Bagram military base in Afghanistan without first letting President Hamid Karzai know, said Salami according to a report by Iran’s Fars news agency.

“And this shows that the US empire is coming to an end,” he said.

Obama made a surprise visit to Afghanistan on Sunday and spoke to the Afghan president, but did not meet with him.

Karzai previously rejected an invitation extended through the US Embassy to meet Obama at Bagram.

“President Karzai said he would warmly welcome him [Obama] if he comes to the palace, but in no way would he go [to] Bagram to meet him,” Abdul Karim Khurram, Karzai’s chief of staff, told Reuters.

A US official said the White House was not surprised that the proposed visit did not work on short notice.

The commander also said, according to the report, that Iran continued to gain military and economic power, warning the country’s enemies that their plots against it would fail.

“Any enemy formula will entail an unexpected ending for him and this is due to the Iranian nation’s reliance on religious and Islamic beliefs,” added Salami.

Meanwhile, Iran’s Foreign Minister Mohammad Javad Zarif slammed Israel’s attempts to set redlines on the country’s nuclear program at a ministerial conference of the Non-Aligned Movement in Algeria on Wednesday.

“Is this not insolence towards the international law and the Non-Proliferation Treaty that [Israel], a non-member of NPT, which has massive nuclear arsenals and poses major existential threats to the entire Middle East region, sets redlines on Iran’s peaceful nuclear program?” asked Zarif, Iran’s Tasnim news agency reported.

Zarif said that attempts to paint Iran as a threat to the region and the world have repeatedly turned out to be “total lies” and that the country is opposed to nuclear weapons.

“Iran and Russia are going to sign a new document on customs cooperation,” said Karbasiyan.

Current trade is worth about $5 billion a year. 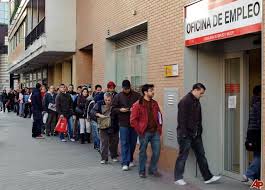 With yields at record lows and stocks soaring, is it any wonder that the politicians of Europe's periphery are proclaiming victory over the crisis (and yet oddly imploring Draghi to do moar?). Perhaps, just perhaps, they are keeping one eye on the 'real' economic progress that is being made (or un-made) in their nations... such as Spain, where there are now 1.26 million people who have been jobless since 2010 and the long-term unemployment rate has risen by more than 500% since 2007.

Via Matthew Bennet of The Spain Report,

There are now 1.26 million Spaniards who have not had a job since 2010, and the total continues to rise, according to an adjunct report to the National Statistics Institute’s Active Population Survey published on May 23.

The institute notes that this represents an increase of 22.5% on the figure for 2012, and that the very-long term unemployed now represent 23.1% of the total.

Edward Hugh, an independent British economist in Barcelona, told The Spain Report that: “The cost of the crisis has been distributed very unequally in Spain. Some barely have noticed it, while a growing number of others have been out of work for more than three years. Many of these people are now “structurally unemployed”, and many of those over 50 may never work again. It’s a national disaster.”

In the United States, long-term unemployment is considered to be those who have been out of work for longer than six months, but in Spain, 691,000 Spanish women and 584,000 Spanish men had not worked for more than three years.

The break down of unemployment according to the subjects unemployed Spaniards had studied shows that, overall, those with a basic level of education are the worst hit: 32.5% are unemployed.

For men, the worst training programme to have followed in terms of finding a job upon graduation was: “environmental protection”, which shows an unemployment rate of 47.7%.

For women, the worst training option was architecture and construction, which produced a 30.7% unemployment rate.

But don't worry becaus ethe government is on it...


Credit to Zero Hedge
Posted by Unknown at 8:00 AM No comments: Links to this post