Microsoft will 'solve' cancer within 10 years by 'reprogramming' diseased cells

A reason for taking the mark of the beast....

Microsoft has vowed to “solve the problem of cancer” within a decade by using ground-breaking computer science to crack the code of diseased cells so they can be reprogrammed back to a healthy state.

In a dramatic change of direction for the technology giant, the company has assembled a “small army” of the world’s best biologists, programmers and engineers who are tackling cancer as if it were a bug in a computer system.

This summer Microsoft opened its first wet laboratory where it will test out the findings of its computer scientists who are creating huge maps of the internal workings of cell networks. 
The researchers are even working on a computer made from DNA which could live inside cells and look for faults in bodily networks, like cancer. If it spotted cancerous chances it would reboot the system and clear out the diseased cells.

Chris Bishop, laboratory director at Microsoft Research, said: “I think it’s a very natural thing for Microsoft to be looking at because we have tremendous expertise in computer science and what is going on in cancer is a computational problem.

"It’s not just an analogy, it’s a deep mathematical insight. Biology and computing are disciplines which seem like chalk and cheese but which have very deep connections on the most fundamental level.”

The biological computation group at Microsoft are developing molecular computers built from DNA which act like a doctor to spot cancer cells and destroy them.

Andrew Philips, head of the group, said: “It’s long term, but… I think it will be technically possible in five to 10 years time to put in a smart molecular system that can detect disease.”

The programming principles and tools group has already developed software that mimics the healthy behavior of a cell, so that it can be compared to that of a diseased cell, to work out where the problem occurred and how it can be fixed.

The Bio Model Analyser software is already being used to help researchers understand how to treat leukemia more effectively.


Credit to The Telegraph
http://www.telegraph.co.uk/science/2016/09/20/microsoft-will-solve-cancer-within-10-years-by-reprogramming-dis/

You Have 3-4 Weeks-to-Prepare- No Food, Gold, Guns, Water? You Will Not Survive The BDI indicates that global shipping is running aground.

If Clinton cannot win, the globalists will crash the economy. For all intents and purposes, the economy has already crashed, only the crumbs are falling to earth.
Here is a quick look at where we are. I want to stress that we are weeks away from this possibility.

The low oil prices represent a financial risk which is equivalent with the housing bust.  Most recently, experts are seeing the signs of another global financial meltdown which is nudging the global economies into a series of quantitative easing in a new round of forcing taxpayers to support bankers from their own mistakes through the private theft of public assets.

Key bank stocks in Europe are trading at levels lower than in the depths of both the global financial crisis (2009) and the European sovereign debt crisis (2012). Just one week before it wanted to release its financial results, it already issued a profit warning to the markets, and Deutsche Bank’s capitalization has lost in excess of 5B EUR since the profit warning, on top of seeing an additional 18B EUR set of devastating losses since last summer. Deutsche Bank’s trading is now less than 50% of the share price it was trading at in July of 2015. In short, the bottom is falling out of the European banks and there is no end in sight to the carnage. There is no shortage of places to hang your hat with regard to the dire straits that the American energy industry finds itself in.
From the Economic Collapse Blog:

“Since the start of 2015, 42 North American oil companies have filed for bankruptcy, 130,000 good paying energy jobs have been lost in the United States and at this point, 50 percent of all energy junk bonds are “distressed” according to Standard & Poor’s.  …some of the big banks have a tremendous amount of loan exposure to the energy industry, and now they are bracing for big losses.  And the longer the price of oil stays this low, the worse the carnage is going to get.”

And as it is with the European banks, there is no end in sight to this financial massacre of America’s economic life-blood. Let’s not forget that the best measure of global economic health, the Baltic Dry Index, continues to plummet to all-time lows of under 300.
The end is already here. Nothing is moving internationally. The oil dip in prices demonstrates that, and the Baltic Dry Index indicates virtually nothing is shipping. Soon your food will not be shipped. Are you ready?
LET ME BE CLEAR, IF YOU DO NOT HAVE FOOD, WATER, MEDICINE, GUNS, AMMO, SEEDS, GOLD AND ALLIES, YOU WILL NOT SURVIVE WHAT IS COMING.
Credit to Common Sense
Posted by Unknown at 12:00 PM No comments:

Culture's No. 1 Lie That Will Send You to Hell

Princeton Professor: "Something Shocking" Will Happen Next Month In The Presidential Race 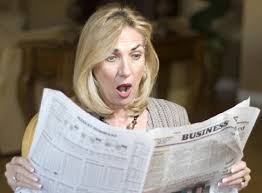 While some have been holding their breath in ancticipation of what the next batch of dramatic revelations from Wikileaks' Julian Assange, Guccifer2 or some other "Russian" hacker may be, many have already thrown in the towel, saying there is little that can further surprise the population in a presidential race that has already surpassed all expectations for dramatic developments, unexpected twists and turns and sheer shock value.
However, if what Princeton history and public affairs professor Julian Zelizer wrote overnight on CNN is accurate, the best, or rather worst, is yet to come.
In an op-ed, the professor writes that "as September comes to an end, presidential-election observers are beginning to wonder if there will be an October Surprise. In a campaign where the unexpected has become normalized, both parties -- but particularly Democrats -- suspect that the next month could bring a shocking revelation."

The notion of an October Surprise gained widespread popularity in the 1980 election, when Ronald Reagan's campaign feared that President Jimmy Carter would announce a resolution to the Iran hostage crisis only weeks or days before Americans went to vote. While Carter was in fact working on an end to the crisis, irrespective of the election, the Iranians did not release the hostages until after Reagan's inauguration.

Indeed, the "October Surprise" is a staple of presidential elections: some examples listed by Zelizer include what he dubs the "the most dramatic incarnation of a political surprise" which took place in 1968, specifically on October 31, when Johnson announced that he would undertake an immediate bombing halt against the North Vietnamese in the hope of reaching a peace agreement. The announcement sent shudders up the spine of Republican Richard Nixon, whose campaign had promised that as president he would bring peace.
Then in 1992, with just a few days left in the three-way presidential race between President George H.W. Bush, Democrat Bill Clinton and independent Ross Perot, former Secretary of Defense Caspar Weinberger was indicted for having lied to a prosecutor during the Iran-Contra investigation. The indictment brought back memories of scandals in the Reagan administration to which Bush, as Vice President, had been associated. The news certainly hurt Bush, though most agree many other factors were responsible for his defeat, including the economic recession.
Another example, highlighted by Paul Joseph Watson, involves the 2004 appearance of Osama Bin Laden in a videotaped message a few days before the presidential election in which he all but urged people to vote for Senator John Kerry, which was later acknowledged by both George W. Bush and John Kerry as the deciding factor behind Bush’s victory in that year’s close election.
Which brings us to 2016, when according to Zelizer, "the October Surprise is more likely this year than others simply because this has been a campaign where every week has revealed a new surprise. Donald Trump has already made this one of the most unpredictable races in American politics. His strategy is to constantly do what nobody thought would be done, to make statements or throw out accusations once considered out of bounds."
The Princeton professor points out that while Trump's very nature invites shocking and dramatic revelations, there is also the fact that "the two leading candidates have intense unfavorable ratings. This means there are many organizations, politicians and individuals who don't want to see one of these two candidates win. If the polls continue to tighten, this will greatly increase the incentives for political activists on both sides to do something that will sway the electorate their way."
To be sure, there is much material, both official and "hacked" that can be used against either candidate to generate a last minute change of public opinion.
But it doesn't have to be premeditated "surprise" or leak: Zelizer writes that a "national-security crisis" may unfold in the coming weeks and that both Clinton and Trump would "have to adjust their campaigns" to deal with an event that “could have a dramatic effect.”
"In an age of terrorism, the possibilities for a dramatic event always loom large. The national security threat that Americans now face is one that is highly unpredictable since we are not dealing just with adversarial state actors or even organized terror networks but lone wolves who can cause injury, death and chaos at any time. Regardless of its origins, the bomb that exploded in New York on Saturday was a painful reminder of the kinds of fears and dangers with which we must live."
The professor concludes by noting that by now it is clear that both candidates are extremely skilled in the art of political warfare: Clinton, because of her many decades of experience in different roles in politics, and Trump, because of his time in the media spotlight, are quite comfortable going after each other in ways that might give other politicians pause. In the final weeks, it will be time to unleash absolutely everything they have on the other.
Which perhaps means that "a calm final month would probably be the biggest shocker of all" but Zelizer does not buy that, and instead says that we should all hold on to our seats. For many reasons, "the odds are pretty good that something shocking will happen next month."
And with that all eyes turn again to Putin, pardon Julian Assange and/or the countless citizen journalists who have made the most mudslinging presidential election also the most entertaining one, for what promises to be a dramatic crescendo with just a few weeks left until the fateful November 8, a period which as Clinton stated earlier today "the next 50 days will determine the next 50 years"

Juncker issues WARNING SHOT to Spain: There will be NO MORE funds

The European Commission has to re-rule on the possible freezing of funds for Spain, after consulting the European Parliament later this month or in early October.

It's thought president Jean Claude Juncker is in favour of applying the first sanction if the Spanish government fails to fulfil its commitments to start taking measures to reduce the deficit in the second half of 2016 and in their draft budgets for 2017.

However, Commissioner of Economic Affairs, Pierre Moscovici has argued against punishing Spain for fear it could create a backlash against the eurozone project.

Credit to The Express.co.uk

Putin turns the tables on Poland...he is the Best