Order out of Chaos 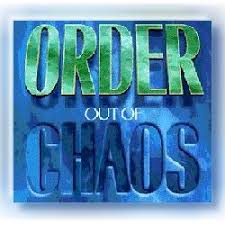 It has become nearly impossible to determine the “truth” in our increasingly chaotic world. Reality is seemingly being twisted and flipped on its head in this rapid unfolding of multi-front crises. The world is facing a new world war in the Arab world, nuclear holocaust from the Fukushima meltdown, total economic collapse/takeover, and a stunning rise in the cost of essential commodities.

"In a time of universal deceit - telling the truth is a revolutionary act." George Orwell

In each case, the public is being told directly the opposite of basic human understanding. In fact, it’s so blatant that it appears to be a test to see how fast and far the collective human psyche can be warped.George Orwell would be impressed with the level ofdoublespeak manipulation that has taken place concerning these recent catastrophic events.

War is now classified as a humanitarian action. Nuclear radiation is now good for your health. Private and government financial collapse is the fault of the taxpayer. And the price for food and oil are dependent on gambling, not actual supply and demand.
Never before, that I and others can recall, have we been hit with so many crises at once with previously unacceptable explanations coming from the people’s supposed leaders. The U.S. president can now put American soldiers into combat and spend tax dollars on war without even consulting the citizens’ elected officials. The EPA can autocratically adjust acceptable radiation levels for human health despite all evidence to the contrary. The private bankers can demand bailouts and austerity cuts from an already ailing population who had nothing to do with their debts. The price of food and oil are allowed to be determined in Wall Street’s casino at the expense of humanity. And we’re being told it’s for our own good, our personal safety, and our economic security.

This insane warping of morals and common sense can only occur under the direction of a force which requires mass confusion and a compromise in human morality to accomplish an unpopular agenda. A force whose motto is “Order Out of Chaos.” A force whose deliberate purpose for creating such calamitous situations is more consolidated control. And clearly, it’s a force with great access to the mainstream media megaphone to propagate their desired reaction to these crises.

What’s different about these events compared to the past is their size, scope, and coalescence at the same time.

Why palestinians want this video removed

Drone inside the U.S.

Lindsey Williams gold to $3000, Arab Monarchies To Be Overthrown