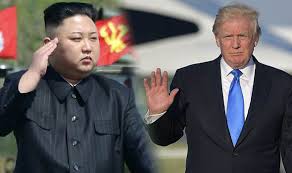 Army Col. David Maxwell (ret.), a former Special Forces officer who once patrolled the Demilitarized Zone separating North and South Korea, painted a bleak picture of the opening hours of war between the neighboring countries.

As a guest on the BBC Radio 4 “Analysis” program, Maxwell—who is now the associate director of the Georgetown University Center for Security Studies—said one “miscalculation” by Kim Jong-un could turn into a full-blown war. In the first day of such a conflict, he predicted 64,000 fatalities:

"If I am a North Korea commander I would unleash the firepower of my artillery and inflict as much death and destruction on the South as I can. In the first hours, there will be hundreds of thousands of artillery rounds and rockets fired to the South, and many of them into Seoul," he said. "Of course, many people won’t get the word, won’t believe it. Many people will be caught out in the open or caught in buildings that will end up being rubble."

South Korea’s capital city and the surrounding metropolitan area accounts for more than half of the nation’s population, and is where most of the country’s foreign visitors are living and working. Those people would have only a matter of minutes to seek shelter. While many countries have agreements with the South Korean government to provide shelter to their citizens, priority will be given to South Koreans in the event of war.

North Korea’s massive chemical weapons arsenal would likely be unleashed, as well. Maxwell said South Korean soldiers in the hills overlooking the DMZ would be their likely target.

Because the Korean War ended with an armistice, not a peace treaty, North and South Korea still remain in a technical state of war.

Credit to TruNews copy
Posted by Unknown at 11:00 AM No comments: Links to this post

Email ThisBlogThis!Share to TwitterShare to FacebookShare to Pinterest
Labels: Daniel 12:7

De-Dollarization Continues, More Countries Pivot Away From The Dollar

While tensions with North Korea have receded in recent weeks, and especially following the latest uneventful weekend, when markets were on edge that Kim could try another missile test launch to celebrate the country's national holiday, this could reverse following news from the BBC that North Korea hackers have reportedly stolen a large cache of military documents from South Korea, including a plan to assassinate North Korea's leader Kim Jong-un.

According to South Korean lawmaker Rhee Cheol-hee - a member of South Korea's ruling party who sits on its parliament's defence committee - the compromised documents, which were stolen from the country's defense ministry, include wartime contingency plans created by the US and South Korea, and also include reports to the allies' senior commanders. Plans for the South's special forces are also said to have been accessed, along with information on significant power plants and military facilities in the South.
Rhee also said some 235 gigabytes of military documents had been stolen from the Defence Integrated Data Centre, and that 80% of them have yet to be identified.

Just like in the case of Equifax, the breach itself took place long ago, with South Korea waiting over a year to disclose the full details of the the hack which took place in September last year. In May, South Korea said a large amount of data had been stolen and that North Korea may have instigated the cyber attack - but gave no details of what was taken. The South Korean defence ministry has so far refused to comment about the allegation, while North Korea denied the claim.
According to South Korea's Yonhap news agency reports that Seoul has been subject to a barrage of cyber attacks by its communist neighbour in recent years, with many targeting government websites and facilities. According to long-running media reports, which have yet to be confirmed with hard evidence however, the isolated, backward state is believed to have specially-trained hackers based overseas, including in China.
One thing that's certain, is that tews that Pyongyang is "likely to have accessed the Seoul-Washington plans for all-out war" in the Koreas will do nothing to soothe tensions between the US and North Korea. The two nations have been at verbal loggerheads over the North's nuclear activities, with the US pressing for a halt to missile tests and Pyongyang vowing to continue them.
Meanwhile, away from cyber war, Pyongyang has been far more aggressive in the realm of unconventional warfare, and the North recently claimed to have successfully tested a miniaturised hydrogen bomb, which could be loaded onto a long-range missile. In a speech at the UN in September, US President Donald Trump threatened to destroy North Korea if it menaced the US or its allies, and said its leader "is on a suicide mission".
Kim responded with a rare televized statement, vowing to "tame the mentally deranged US dotard with fire". Trump's latest comment took the form of a cryptic tweet at the weekend, where he warned that "only one thing will work" in dealing with North Korea, after years of talks had proved fruitless. He did not elaborate further.
Credit to Zero Hedge