The world’s second largest primary silver mine, Tahoe Resources Escobal Mine, was forced to shut down operations in Guatemala by a ruling from the country’s Supreme Court. This was due to a provisional decision by the Guatemalan Supreme court in respect of a request by CALAS, an anti-mining group, for an order to temporarily suspend the license to operate the Escobal Mine until there is a full hearing. (picture courtesy of Tahoe Resources)

While this story has been out for a few days, I believe there is a great deal of misinformation on the Mainstream and Alternative media about the current situation and future outcome of Tahoe’s flagship Escobal Mine. Some analysis suggests that this is just a small speed-bump for Tahoe, so when they are able to address disputed regulatory issues, production and profits will shortly return once again.

However, there also seems to be a another side to the story that could cause more problems for Tahoe with a much longer suspension time than the company is publicly stating. For example, the following was published in the article… Tahoe Resources forced to halt Escobal mine in Guatemala:

A Shutdown Of The Escobal Mine, Ranked #2 In The World, Would Remove 21 Million Oz Of Supply

According to the 2017 World Silver Survey, Tahoe Resources Escobal Mine ranked #2, behind Fresnillo PLC’s Saucito Mine in primary silver production in 2016.  Here are the top five producing primary silver mines in 2016 (Moz – million ounces):
Furthermore, the data in the 2017 World Silver Survey reports that a total of 265 million oz (Moz) of primary silver was produced last year.  Thus, the Escobal Mine represents 8% of total global primary silver mine supply.  If Haywood Analysts are correct that production at Escobal may not resume in 2017, than the mine is likely to lose nearly half of the 20-21 Moz forecasted for 2017.
While this is not a great deal of silver compared to total world silver supply of 886 Moz (in 2016), if the Escobal Mine is shut for a longer period of time, or indefinitely, it could impact the silver market over the next few years.

Email ThisBlogThis!Share to TwitterShare to FacebookShare to Pinterest
Labels: Silver

I think he prefers them to be at war 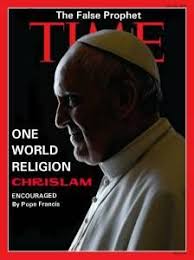 by Thomas D. Williams, Ph.D.8 Jul 2017
In a new interview, Pope Francis said he fears there are “very dangerous alliances between powers who have a distorted view of the world,” including such an alliance between the United States and Russia.

Pope Francis told his interviewer, the Italian journalist Eugenio Scalfari, that he was worried about the G20 summit, which brings together leaders from 20 of the largest economies in the world, along with finance ministers and central bank governors.

“I’m afraid that there are very dangerous alliances between powers who have a distorted view of the world: America and Russia, China and North Korea, Putin and Assad in the war in Syria,” Francis reportedly said.

The Pope said that his greatest concern was the “danger for immigration.”

“As you know well, the main problem in today’s world—which is unfortunately growing—is that of the poor, the weak, and the excluded,” Francis said, “of which immigrants form part.”

“On the other hand there are countries where the majority of the poor do not come from migratory flows but from social disasters; others have few local poor but fear the invasion of migrants,” he continued.

“That’s why the G20 worries me: it primarily affects immigrants from countries all over the world and affects them even more as time goes on.”

Asked for his views on underlying causes driving mass migration, Francis said that the primary reason behind contemporary migration is economic.

“Make no mistake, poor nations are drawn to the continents and countries of ancient wealth,” he said, “especially Europe.”

“Colonialism began in Europe. There were positive aspects of colonialism, but also negative. Nonetheless, Europe grew richer, the richest in the world. It will therefore be the main target of migratory peoples,” he said.

In the interview, Scalfari expressed his own opinion to the Pope regarding the future of Europe, stressing the need for Europe to take on a federal structure, an opinion shared by the pontiff.

European nations will move “if they realize one truth,” Francis said, “either Europe becomes a federal community or it will no longer count for anything in the world.”

Since his election as Pope, Francis has granted a number of interviews to Scalfari, an atheist and co-founder of the Italian daily, La Repubblica. The journalist allegedly does not record their conversations but publishes the interviews from memory.

Nevertheless, to date the Pope has never taken back anything that Scalfari has written, and nor has he stopped granting him interviews, which had led observers to conclude that he is pleased with what Scalfari writes.

The Economist: "Get Ready For A World Currency By 2018"

Get Ready for the Phoenix

THIRTY years from now, Americans, Japanese, Europeans, and people in many other rich countries, and some relatively poor ones will probably be paying for their shopping with the same currency. Prices will be quoted not in dollars, yen or D-marks but in, let’s say, the phoenix. The phoenix will be favoured by companies and shoppers because it will be more convenient than today’s national currencies, which by then will seem a quaint cause of much disruption to economic life in the last twentieth century.

At the beginning of 1988 this appears an outlandish prediction. Proposals for eventual monetary union proliferated five and ten years ago, but they hardly envisaged the setbacks of 1987. The governments of the big economies tried to move an inch or two towards a more managed system of exchange rates – a logical preliminary, it might seem, to radical monetary reform. For lack of co-operation in their underlying economic policies they bungled it horribly, and provoked the rise in interest rates that brought on the stock market crash of October. These events have chastened exchange-rate reformers. The market crash taught them that the pretence of policy co-operation can be worse than nothing, and that until real co-operation is feasible (i.e., until governments surrender some economic sovereignty) further attempts to peg currencies will flounder.

The biggest change in the world economy since the early 1970’s is that flows of money have replaced trade in goods as the force that drives exchange rates. as a result of the relentless integration of the world’s financial markets, differences in national economic policies can disturb interest rates (or expectations of future interest rates) only slightly, yet still call forth huge transfers of financial assets from one country to another. These transfers swamp the flow of trade revenues in their effect on the demand and supply for different currencies, and hence in their effect on exchange rates. As telecommunications technology continues to advance, these transactions will be cheaper and faster still. With unco-ordinated economic policies, currencies can get only more volatile.

In all these ways national economic boundaries are slowly dissolving. As the trend continues, the appeal of a currency union across at least the main industrial countries will seem irresistible to everybody except foreign-exchange traders and governments. In the phoenix zone, economic adjustment to shifts in relative prices would happen smoothly and automatically, rather as it does today between different regions within large economies (a brief on pages 74-75 explains how.) The absence of all currency risk would spur trade, investment and employment.


The phoenix zone would impose tight constraints on national governments. There would be no such thing, for instance, as a national monetary policy. The world phoenix supply would be fixed by a new central bank, descended perhaps from the IMF. The world inflation rate – and hence, within narrow margins, each national inflation rate- would be in its charge. Each country could use taxes and public spending to offset temporary falls in demand, but it would have to borrow rather than print money to finance its budget deficit. With no recourse to the inflation tax, governments and their creditors would be forced to judge their borrowing and lending plans more carefully than they do today. This means a big loss of economic sovereignty, but the trends that make the phoenix so appealing are taking that sovereignty away in any case. Even in a world of more-or-less floating exchange rates, individual governments have seen their policy independence checked by an unfriendly outside world.


As the next century approaches, the natural forces that are pushing the world towards economic integration will offer governments a broad choice. They can go with the flow, or they can build barricades. Preparing the way for the phoenix will mean fewer pretended agreements on policy and more real ones. It will mean allowing and then actively promoting the private-sector use of an international money alongside existing national monies. That would let people vote with their wallets for the eventual move to full currency union. The phoenix would probably start as a cocktail of national currencies, just as the Special Drawing Right is today. In time, though, its value against national currencies would cease to matter, because people would choose it for its convenience and the stability of its purchasing power.

The alternative – to preserve policymaking autonomy- would involve a new proliferation of truly draconian controls on trade and capital flows. This course offers governments a splendid time. They could manage exchange-rate movements, deploy monetary and fiscal policy without inhibition, and tackle the resulting bursts of inflation with prices and incomes polices. It is a growth-crippling prospect. Pencil in the phoenix for around 2018, and welcome it when it comes.

Just to be clear: This is NOT f?ke™ news.

It is an article from The Economist published 29 years and six months ago, today.