The FDA Admits That Nearly Over 70% of U.S. Chickens Contain Cancer-Causing Arsenic 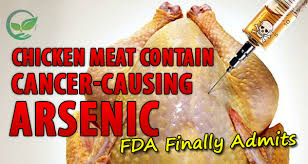 I don’t know about the rest of you, but lately my poultry purchases at my local market have become more and more of a ‘hit-and-miss’ situation, with more ‘misses’ if I’m being honest. As I bite into my homemade chicken nuggets or Coq au Vin (when I’m feeling fancy) I can’t help but feel that the chicken just tastes weird, stringy, just…funny. So a few days ago when I turned on the tube and saw the news headlines stating that the FDA has finally confirmed that chicken meat sold in the USA contains arsenic, my head, and stomach, nearly hit the roof.

This cancer-causing toxic chemical, that in high doses could kill you, is actually being added to chicken feed on purpose, giving store-bought chicken the illusion of healthy coloring and plump appearance. Shockingly, this is the case with more than 70 percent of all U.S. chickens! That is just awful!

The FDA has asked Pfizer to stop manufacturing the arsenic-containing drug, Roxarsone, that was found in the livers of nearly half of all chicken tested. According to the Wall Street Journal, “The agency said it recently conducted a study of 100 broiler chickens that detected inorganic arsenic at higher levels in the livers of chickens treated with 3-Nitro compared with untreated chickens … Pfizer said sale of 3-Nitro would be stopped by early July in order to allow animal producers to transition to other treatments.”

This urgent request by the FDA is surprising in itself as the agency has always maintained that the arsenic in chickens is at such low levels that it is safe for consumption, when meanwhile it has been clinically proven to be extremely toxic to human health, causing an array of neurological defects in developing fetuses and young children…Looks like the FDA finally got the memo, and not a moment too soon!

So, the next time you’re out buying chicken (if you’re not totally put off by it at this point) make sure you look out for the following:

-If the chicken meat is bright pink in color, like in an unnatural way, avoid it at all costs.

-Make sure that the fat content on the chicken is white to deep yellow, not gray or pasty.

-Check the date on the package.

-And finally, aim for “Certified Organic” meat products. It’s probably safest choice for you and your family.