IN A MAJOR ASSAULT ON FREE SPEECH, Toronto City Councillor calls for legislation that will ban rallies against the Islamization of Canada

Even though it’s ALWAYS the Far Left and Muslim counter-demonstrators who incite and carry out violence in order to shut down these free speech rallies, this useful idiot for Islam, James Pasternak, will do their dirty work for them by shutting down anti-Islamization patriot rallies, which he calls “hate rallies.” “We don’t want to be an enabler of these hate patiot rallies in any way,” the councillor said. “We would prefer that they not be on city property or city institutions.”

Mystic Rabbi Describes How Will Messiah Be Revealed to World


“Behold, I am sending My messenger to clear the way before Me, and the Lord whom you seek shall come to His Temple suddenly. As for the angel of the covenant that you desire, he is already coming.” Malachi 3:1 (The Israel Bible™)

Rabbi Nir Ben Artzi, a well-known mystic rabbi with a large following, has made several predictions about the Messiah. (Courtesy/Breaking Israel News)

Rabbi Nir Ben Artzi, a well-known Israeli mystic leader, made a remarkable statement last Sunday predicting that the identity of the Messiah would be revealed in the very near future, even giving specific details on how the revelation would occur.

“Messiah is at work right now,” Rabbi Ben Artzi said in a sermon. “Jews, be happy! Very soon, the Messiah will be revealed to everyone!”

The rabbi went into detail, explaining how this would come about.

This singular revelation was accompanied by details.

“There will be a yellow card and holy letters inscribed on a parchment like a Torah scroll, where they will be told in Aramaic who is King Messiah,” the rabbi continued. Aramaic is no longer spoken, but it is the language of the Talmud (oral law). “Then, they will have no choice and they will recognize the King Messiah.

“From above they will be told, ‘The choice is in your hands. Either you reveal him or the Creator of the world will cause you great trouble and will not let go until you reveal this and tell it to the people of Israel’,” Rabbi Ben Artzi said. “Then they will follow the instructions laid out in the dream and acknowledge who the Messiah King is.”

The rabbi even described the inscription that will be revealed to the rabbis in their vision of the the parchment.

“I, the Lord, command you to say and to show who is the King Messiah, the man of God chosen by Him.”

Rabbi Ben Artzi explained why God has chosen this specific time to reveal the Messiah.

“The Creator can no longer wait while watching the suffering of the Jews in Israel and abroad,” Rabb Ben Artzi said. “Their suffering is especially difficult since Israel is the Chosen People, chosen by the Holy One, blessed be He.”

The rabbi did not discount the non-Jews from this soon-to-be-revealed process. In an exclusive response to Breaking Israel News, Rabbi Ben Artzi explained the role of Christians in the messianic age.

“In the beginning of Christianity, there was a schism, and there were Jews among them,” the rabbi explained. “But some Jews continued in the path of Christianity. Therefore, there are among them today those that have the spark of Judaism in their soul and in their spirit. That is why they have an affinity for Judaism and a love of the Jews that is awakening as the Messiah approaches.”

Rabbi Ben Artzi had a dire warning for Jews who live outside of Israel, telling them that since the Messiah is about to be revealed, now is the time to make aliyah (immigrate to Israel).

“God has given man free choice so that he will willingly connect to God, and to the Land of Israel,” Rabbi Ben Artzi told Breaking Israel News. “If they truly believe in God, they will come of their own free will.”

Rabbi Ben Artzi emphasized that the timeliness of the Messiah has been made clear by current events in order to bring Jews back to Israel.

“There are great signs showing that it is time to return: growing anti-Semitism, signs in nature, global political conflicts,” the Kabbalist leader said. However, he added, “Throughout all of this, the land of Israel is conspicuously protected. Anyone who looks at the signs will understand and come to Israel immediately.”


Following a successful round of testing on a proving ground near Moscow, the Russian Defense Ministry is now prepared to roll out robot tanks it says are superior to human-controlled versions.

According to the director of the Department of Innovation Research at the Defense Ministry’s Directorate of Research Activities, Col. Oleg Pomazuev, the “Nehreta” robotic weapons platform “outperformed” manned tanks during a recent exercise at the Alabino proving grounds near Moscow. The system includes a machine gun or a rocket-propelled grenade launcher, although it is described as a “tank” in an article on a Russian military news website.

The DefenseOne blog says human-operated vehicles currently used by the Russian military include the BRDM reconnaissance vehicle, a four-axle wheeled vehicle similar to the U.S. military’s armored personnel carriers, and the GAZ Tigr, which is similar to the up-armored Humvee. Their report states the Defense Ministry has been experimenting with autonomous military equipment for several years for jobs ranging from bomb disposal to small-arms combat.

Russia does also have a semi-autonomous tank, the T-14, which features a turret that is remotely operated by a human within the vehicle. This feature allows the crew to be situated lower in the tank and away from its magazine, which is a vulnerability in most human-driven designs.

The autonomous part is the “active protection system,” which is continuously scanning the T-14’s surroundings, looking for threats. It can automatically fire to almost instantly counter those threats, including incoming anti-tank missiles.

Versions of the T-14 and Nehreta were deployed earlier this fall during the Zapad 2017 exercise in Belarus. Currently, the Russian Army still deploys T-72 and its T-90 variant, which were developed by the Soviet Union in the 1970s.
Credit to Trunews

Email ThisBlogThis!Share to TwitterShare to FacebookShare to Pinterest
Labels: 1 Corinthians 6:9


On September 18th, the US Senate voted to ban the use of products from the Moscow-based cyber security firm Kaspersky Lab by the federal government, citing national security risk. The vote was included as an amendment to an annual defense policy spending bill approved by the Senate on the same day and was written to bar the use of Kaspersky Lab software in government civilian and military agencies.
Alas, according to a new revelation from WikiLeaks this morning, any perceived "national security risk" from Kaspersky could have resulted from the fact that the CIA specifically designed hacking software, code-named 'Hive', which intentionally "impersonated" the Russian cyber security firm so that "if the target organization looks at the network traffic coming out of its network, it is likely to misattribute the CIA exfiltration of data to uninvolved entities whose identities have been impersonated."
Here's a summary of the hacking tool posted by WikiLeaks:

Today, 9 November 2017, WikiLeaks publishes the source code and development logs to Hive, a major component of the CIA infrastructure to control its malware.

Hive solves a critical problem for the malware operators at the CIA. Even the most sophisticated malware implant on a target computer is useless if there is no way for it to communicate with its operators in a secure manner that does not draw attention. Using Hive even if an implant is discovered on a target computer, attributing it to the CIA is difficult by just looking at the communication of the malware with other servers on the internet. Hive provides a covert communications platform for a whole range of CIA malware to send exfiltrated information to CIA servers and to receive new instructions from operators at the CIA.

The cover domain delivers 'innocent' content if somebody browses it by chance. A visitor will not suspect that it is anything else but a normal website. The only peculiarity is not visible to non-technical users - a HTTPS server option that is not widely used: Optional Client Authentication. But Hive uses the uncommon Optional Client Authentication so that the user browsing the website is not required to authenticate - it is optional. But implants talking to Hive do authenticate themselves and can therefore be detected by the Blot server. Traffic from implants is sent to an implant operator management gateway called Honeycomb (see graphic above) while all other traffic go to a cover server that delivers the insuspicious content for all other users.

Digital certificates for the authentication of implants are generated by the CIA impersonating existing entities. The three examples included in the source code build a fake certificate for the anti-virus company Kaspersky Laboratory, Moscow pretending to be signed by Thawte Premium Server CA, Cape Town. In this way, if the target organization looks at the network traffic coming out of its network, it is likely to misattribute the CIA exfiltration of data to uninvolved entities whose identities have been impersonated. 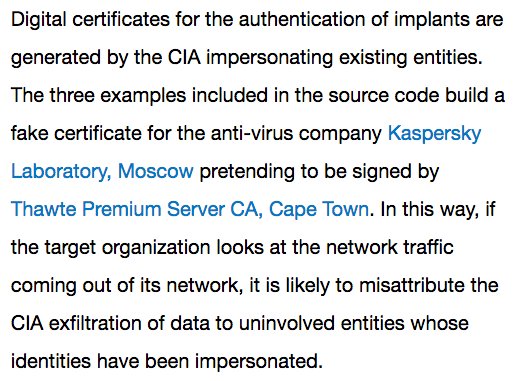 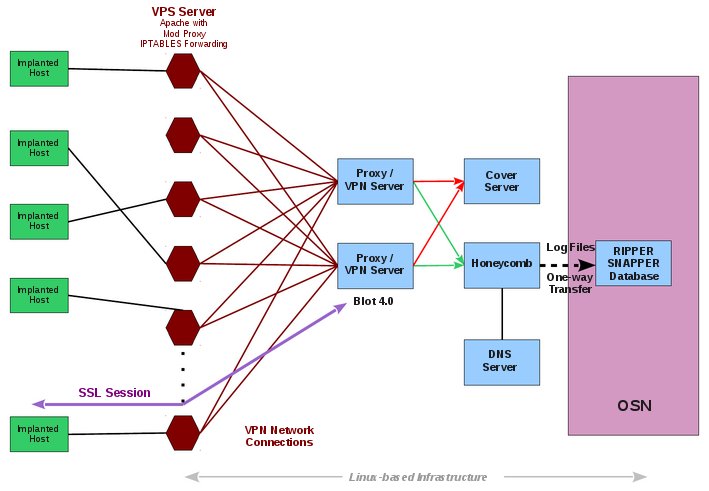 Of course, Kaspersky Lab has been producing anti-virus software for 20 years and boasts 400 million customers around the world. Suspected of being involved in cyber espionage, the company's management has maintained that it has been "caught in the middle of a geopolitical fight" and is being "treated unfairly even though the company has never helped, nor will help, any government in the world with its cyberespionage or offensive cyber efforts"...
...this new WikiLeaks revelation would seemingly lend some credence to Kaspersky's conclusion.

YOU WILL NOT BELIEVE WHAT FACEBOOK IS ASKING ITS USERS FOR!!!