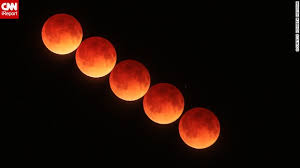 Folks, we are about to witness something that the ancients longed to live to see. For more on the blood moon and its Biblical connection to Jewish feasts and the end of days click here and here.

Concerning the new book Cauldron: Supernatural Implications of the Current Middle East, let me say from the outset that it’s been a long time since I felt so strongly that people purchase, read, re-read, study and then share a particular book, and to do so with a sense of urgency. This is because, with recent developments throughout the Middle East and especially those surrounding Israel, I have increasingly felt as a publisher that somebody (with qualifications to do so) needed to put into clear perspective for the rest of us the ramifications of what is currently unfolding in light of Bible prophecy. As I have spoken with the world’s most respected prophecy scholars over the past 12 months, I have learned that, to a person, there is a heightened sense of belief that global events not only seem torn from the pages of apocalyptic literature but truly are those foreseen by Scripture (the signs of the end times) and that they are now coming together with such precision and speed that it has several well-known Christian leaders beside themselves.

“Something is in the wind,” they say, pointing to such developments as the recent call by Jewish leaders (even in the Knesset, the legislative branch of the Israeli government) to build the Third Temple in Jerusalem; a simultaneous effort by the United States to push Israel into a peace agreement this year; political and religious leaders advocating for a single global, financial, and political authority; and even what now appears to be intentional movement by global powers that could initiate the battle of Armageddon. Please understand that within the degrading relationship and saber rattling between the United States, Russia, the European Union, and China exist the very components necessary for the final global conflict, called in Ezekiel 38 “the battle of Gog and Magog.” Ezekiel foresaw this supernatural contest occurring in the latter times after Israel would be “gathered out of many people and nations” and recognized as a nation once again. During that generation in which Israel is so reunified—which was accomplished in 1948—the Battle of Gog and Magog occurs. But if a biblical generation is approximately seventy years (see Psalms 90:10, Daniel 9) and if seven years is also needed for a coming “Peace” plan (called a “covenant” in the book of Daniel) to be enforced upon Israel, counting forward from 1948 seems to indicate these decisive events leading to the Great Tribulation and “battle of Armageddon” have already started their countdown. Ezekiel even tells us who the instigators of the battle will be—Iran (Persia), which becomes the number-one confederate with Russia (Gog) in this invasion of Israel

Are you prepared? Ever-ready?

If Ebola only spreads via direct contact, how did the nurse in Spain get infected while wearing protective gear? Authorities in Spain have confirmed that a member of a medical team working in a modern hospital somehow managed to contract Ebola from a patient she was treating. As Associated Press reports: [1]
Spanish authorities said they were investigating how the nurse became infected at a hospital with modern health care facilities and special equipment for handling cases of deadly viruses.
“…Staff at the Carlos III hospital where she worked claimed the protective suits they were given were not good enough,” reports the Daily Mail. [2]
“Unnamed sources told Spanish daily El Pais the suits did not meet World Health Organisation standards. They said the suits they were issued with were permeable and lacked breathing apparatus.”

It is apparent from the reporting of this incident that:
• The nurse was wearing medical isolation gear, and she knew she was treating an Ebola patient.
• She had access to all the advantages of “modern health care facilities.”
• She was fully versed in infectious disease safety protocols and practices.
And yet, despite all these advantages, this nurse still got infected by a virus that the CDC insists can only be transmitted via “direct contact.”

As the Daily Mail reports, Dr. Ben Neuman, Lecturer in Virology at the University of Reading, has theorized that the nurse in Spain may have been infected by coming into contact while removing her protective gear:
Nurses face a problem in that a person who is sick with Ebola can make quite a lot of highly infectious waste, as the patient loses fluid through diarrhoea and vomiting.
Those bodily fluids can contain millions of Ebola viruses, and it only takes one to transfer the infection. The protective suits that Ebola workers wear provide excellent protection, but there is a danger when it is time to take the suit off. It is also possible that a tiny amount of Ebola-containing liquid splashed on the protective garments, and then was transferred to her skin while removing the protective clothing.
What Dr. Neuman is describing, of course, is infection via INDIRECT contact — a scenario that the U.S. Centers for Disease Control continues to claim is impossible.
CDC director Tom Frieden continues to publicly claim that Ebola can only be contracted from “direct contact.” This false claim is one of the five biggest lies about Ebola that the U.S. government continues to spread.
The danger in this lie is that it encourages Ebola to spread more rapidly because citizens and front line health care workers are failing to take appropriate steps to protect themselves from acquiring the virus. If the CDC really wanted to halt Ebola in America, it would be demanding that all health care workers wear full face respirators when coming anywhere near an Ebola patient. But instead, we get the mantra of denial: “Ebola can only spread through direct contact.”
Tell that to the nurse in Spain.
Learn pandemic preparedness today with the free, downloadable MP3 files fromwww.BioDefense.com
Sources for this article include:
[1] http://hosted.ap.org/dynamic/stories/E/EU_SP…
[2] http://www.dailymail.co.uk/news/article-2783…

Police confiscating Americans’ hard earned cash, as well as a wide variety of other valuables, without an arrest or conviction is a disturbing and growing practice throughput these United States. Since cops get to keep the seized funds and use the money on pretty much anything they want, the practice is becoming endemic in certain parts of the nation. The theft is often referred to simply as civil forfeiture, orcivil asset forfeiture. Incredibly, under civil forfeiture laws your property is incredibly “guilty until you prove it innocent.”
The extent of the problem came to my attention last summer after reading an excellent article by Sarah Stillman in the New Yorker. The article struck such a chord with me, I penned a post highlighting it and addressing the issue, titled:Why You Should Never, Ever Drive Through Tenaha, Texas. That article ended up being one of my most popular posts of 2013.
Fast forward a year, and many mainstream publications have also jumped on the topic. Most notably, the Washington Post published an excellent article last month titled, Stop and Seize, which I strongly suggest reading if you haven’t already.
Fortunately for us all, the issue has also caught the eye of the always hilarious, John Oliver of Last Week Tonight. The following clip from his show is brilliant. Not only is it hilarious, but it will hopefully educate a wider audience about this insidious practice so that it can be stopped once and for all.
As one officer admitted in an affidavit justifying his confiscation of an innocent driver’s cash:

“Common people do not carry this much U.S. currency.”

Credit to Zero Hedge
Posted by Unknown at 9:00 AM No comments: