The path to world war three

The Russian Defence Ministry said on Tuesday it had deployed an S-300 missile system to its Tartus naval base in Syria.

"The missile battery is intended to ensure the safety of the naval base ... It is unclear why the deployment of the S-300 caused such alarm among our Western partners," the ministry said in a statement.

U.S. media reported earlier this week that Russia had sent the S-300 system to Syria at the weekend in its first foreign deployment of the surface-to-air weapon in the civil war-ridden country.

http://www.reuters.com/article/us-mideast-crisis-syria-russia-s-idUSKCN1241SR?il=0
Posted by Unknown at 2:00 PM No comments:

Rabbi Predicts Martial Law In US Before Presidential Election, Declaration Of “Messiah”

“A thousand may fall at thy side, and ten thousand at thy right hand; it shall not come nigh thee.”
Psalms 91:7 (The Israel Bible™)

Rabbi Alon Anava, who lectures all over the world, preparing Jewish people for Moshiach (Messiah), was interviewed last week by veteran broadcaster Tamar Yonah of Israel News Talk Radio about different scenarios for how God might bring the final redemption. He spoke about what Jews and non-Jews should be doing right now to avoid the most difficult consequences.

Rabbi Anava mentioned three particularly dark scenarios. He spoke at great length about the controversial dwarf star Nibiru. If Nibiru is the scenario by which God will bring us to the final redemption, Rabbi Anava said, “Two-thirds of the world could be underwater.”

And it shall come to pass that in all the land saith Hashem two parts therein shall be cut off and die; but the third shall be left therein. Zechariah 13:8

He also said, “There are prophecies that there is going to be an 11-second war. That can only be a nuclear war.” Naming China, Iran, Russia and Korea as four major enemies of the US, he spoke about the possibility that one of these countries could attack by detonating an EMP (electromagnetic pulse) high over North America, thereby plunging it “into the 18th century by completely burning out anything that has electronics in it.”

Asked about the connection between the US presidential election and the End of Days, he remarked, “Of course the elections have to do with end of time. Moshiach is on the doorstep and every current affair that we see… you just open our [Scripture] from 2000 years ago and it’s like opening a newspaper. Everything is written. Everything was predicted. Everything was prophesied.
“Personally, I don’t think we’re going to get to the elections. I think they’re going to declare martial law way before the elections happen. Maybe a terror attack, by financial collapse, by riots. Sixty million Americans are on food stamps. Just take that away for one month and you’re going to have 60 million Americans on the streets, creating riots. That’s very easily a cause to call for martial law.”
There is a Jewish teaching that positive prophecies will come true but negative prophecies can be changed. How does Rabbi Anava suggest people can annul these dark scenarios?“Both Jews and non-Jews alike – we all have to repent. We have to go back to our source. Believing in one God, following the Torah and mitzvahs (Biblical commandments).
“The non-Jews also have to repent and they also have to stop doing bad things and they also have to follow the laws of Noach (Noah) that you can find in the Torah.
“There’s no difference. We all have to repent and basically convince the Master of the Universe to annul all these decrees. Especially now, before the High Holidays, repenting means, first of all, stop doing any bad or evil things that we do. Stop lying. Stop cheating. Being honest. Giving charity. Helping people. No judging people the wrong way. Needless to say, following the Torah – observing the Shabbos (Sabbath), eating kosher…. This is the time to really get your act together.”If enough people turn to God, “we do have the option of sweetening the judgement and receiving the redemption in the blink of an eye, in a sweet way, with no wars, with no problems, with no hatred. It’s all in our hands and the sooner we do it, the better, because the time is ticking.”Asked where the Jewish people should go, Rabbi Anava unequivocally stated that “Israel is the only safe place… It’s the Land of God. Nothing is going to happen on this land.”
“Righteous gentiles, as long as they follow the Seven Laws of Noach, they’ll be saved. We have a promise from the Torah and a promise from King David [in Psalms 91:7]. You have to be close to God,” Rabbi Anava emphasized.
“Not only do I believe, I will be beyond surprised if nothing’s going to change in the next few weeks or months. I know it’s happening. Moshiach is happening. Now is the time and everybody better get their act together.”

Tamar Yonah told Breaking Israel News that her interview with Rabbi Anava got four times the amount of traffic as other shows on Israel News Talk Radio. Well-aware of the controversy surrounding Nibiru, Yonah related that she wanted to share the story because of a lesson she learned in childhood.
Yonah’s father was a Holocaust survivor from Poland who told his children that when Russian Zionist Ze’ev Jabotinsky tried to warn the Jews of Europe to leave before WWII, no one would listen to him. In many cases, he was barred from even speaking.She recommends keeping an open mind. “You need to listen to people, no matter how crazy it sounds. You listen because crazy things happen in this world. Personally,” Yonah told Breaking Israel News, “I’ve heard these predictions throughout the years. I don’t believe the dates. I like to listen. I want to be open. But I’m of the school of ‘let’s wait and see.’”


“I think we have a bit more time. There are scenarios that need to mature. I think that we’re close. Anyone who believes in the Torah and the Bible can see that we’re in the End of Days period, but my opinion is that it’s not going to happen in the next three weeks.”

More Confessions Of An Economic Hit Man: "This Time, They’re Coming For Your Democracy" 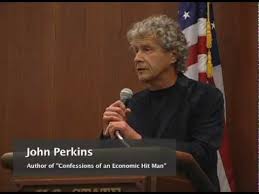 Twelve years ago, John Perkins published his book, Confessions of an Economic Hit Man, and it rapidly rose up The New York Times’ best-seller list. In it, Perkins describes his career convincing heads of state to adopt economic policies that impoverished their countries and undermined democratic institutions. These policies helped to enrich tiny, local elite groups while padding the pockets of U.S.-based transnational corporations.
Perkins was recruited, he says, by the National Security Agency (NSA), but he worked for a private consulting company. His job as an undertrained, overpaid economist was to generate reports that justified lucrative contracts for U.S. corporations, while plunging vulnerable nations into debt. Countries that didn’t cooperate saw the screws tightened on their economies. In Chile, for example, President Richard Nixon famously called on the CIA to “make the economy scream” to undermine the prospects of the democratically elected president, Salvador Allende.
If economic pressure and threats didn’t work, Perkins says, the jackals were called to either overthrow or assassinate the noncompliant heads of state. That is, indeed, what happened to Allende, with the backing of the CIA.
Perkins’ book has been controversial, and some have disputed some of his claims, including, for example, that the NSA was involved in activities beyond code making and breaking.
Perkins has just reissued his book with major updates. The basic premise of the book remains the same, but the update shows how the economic hit man approach has evolved in the last 12 years. Among other things, U.S. cities are now on the target list. The combination of debt, enforced austerity, underinvestment, privatization, and the undermining of democratically elected governments is now happening here.
I couldn’t help but think about Flint, Michigan, under emergency management as I read The New Confessions of an Economic Hit Man.
I interviewed Perkins at his home in the Seattle area. In addition to being a recovering economic hit man, he is a grandfather and a founder and board member of Dream Change and The Pachamama Alliance, organizations that work for “a world that future generations will want to inherit.”

Top Economist Advising Americans to Store Food, Water and to Get a Gun Famed economist, Joseph Meyer
I interviewed famed economist, Joseph Meyer, and what he said was stunning, almost unbelievable. Yet, this economist is respect by nearly everyone.
Meyer is known for being conservative and pro-investment. You will not believe what he said to do with your investment capital including your 401k’s and pensions. You will need to be seated while you listen to this interview as you listen to the impact that Deutsche Bank will have on the American economy. The game is over and this expert tells you what you should be doing.

Bill Holter there is no way out...

That debt growth amounts to roughly 7.5% of the entire US economy.  By comparison, the Marshall Plan, which completely rebuilt Western Europe after World World II, cost $12 billion back in 1948, or roughly 4.3% of US GDP at the time.
The initial appropriation for the WPA, perhaps the largest of Roosevelt’s New Deal “make work” programs that employed millions of people, cost  6.7% of US GDP.  And, more recently, the US $700 billion bank bailout at the beginning of the 2008 financial crisis was the equivalent of 4.8% of GDP.  So basically these people managed to increase the national debt by a bigger percentage than the cost of the New Deal, Marshall Plan, and 2008 bank bailout.

China warns Japan not to 'play with fire' 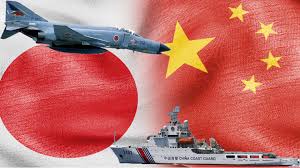 China on Thursday warned Japan against "playing with fire" in the contested waters of the South China Sea, after Tokyo announced it may patrol alongside the US in the region.

China also sent fighter planes for the first time over a strait near Japan on Monday as part of a group of more than 40 jets headed to train in the West Pacific.

The move followed remarks by Japanese Defence Minister Tomomi Inada this month that Tokyo would increase its engagement in the South China Sea through joint training with the US Navy, exercises with regional navies and capacity-building assistance to coastal nations.

The Chinese defence ministry said the aim of the announcement was "to mess up the South China Sea situation and try to gain interests from the troubled waters."

"If Japan wants to conduct any joint patrol or joint exercises in waters administered by China, it is just like playing with fire, and the Chinese military will not sit and watch," ministry spokesman Yang Yujun told a regular press briefing.

Beijing asserts sovereignty over almost all of the South China Sea, dismissing rival partial claims from its Southeast Asian neighbours. It rejects any intervention by Japan in the waterway.