The G7 group of economic powers has agreed to intensify sanctions on Russia over its actions in Ukraine.

A G7 statement gave no detail of the sanctions, but US officials said they could announce measures by Monday.

The West accuses Russia of leading a secession rebellion in Ukraine's east, months after it annexed Crimea. Moscow denies the allegations.

Meanwhile, negotiators are trying to secure the release of international observers seized by pro-Russia gunmen.

Forces in the city of Sloviansk are still holding the eight European military observers and several Ukrainian army personnel who they seized on Friday and accuse of espionage. 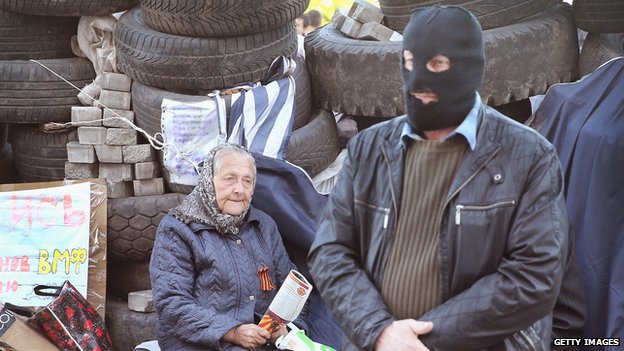 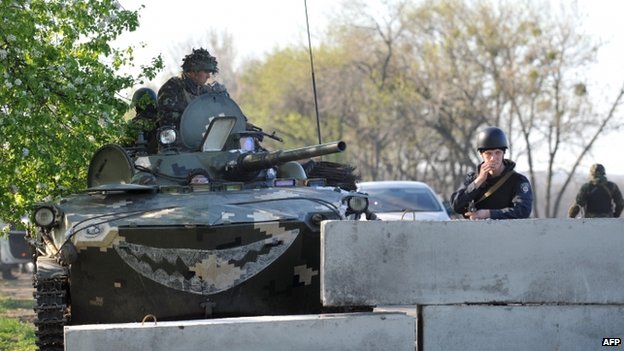 The observers were taking part in a mission linked to the Organisation for Security and Co-operation in Europe (OSCE).

Russia has tens of thousands of troops deployed along its side of the border with Ukraine and has said it would act if its interests were threatened.

The US accused Russian jets of violating Ukraine's airspace on Friday in a further sign of escalation.

Meanwhile, the G7 praised Ukraine for acting with restraint in dealing with the "armed bands" that had occupied government buildings.

"Given the urgency of securing the opportunity for a successful and peaceful democratic vote next month in Ukraine's presidential elections, we have committed to act urgently to intensify targeted sanctions and measures to increase the costs of Russia's actions," said the statement.

The US and EU already has assets freezes and travel bans in place target a number of Russian individuals and firms accused of playing a part in the annexation of Crimea.

Credit to BBC
Posted by Unknown at 9:00 AM No comments: Links to this post


As new U.S. sanctions against Russia loom, the Kremlin has shut down—at least for now—intensive high level communications between top U.S. and Russian officials.
Since the invasion of Crimea, President Vladimir Putin and President Barack Obama have had regular phone calls in an often half-hearted attempt to deescalate the ongoing crisis inside Ukraine. But as the U.S. and EU prepare to unveil new sanctions against Russia, Putin has decided the interactions should stop. The Kremlin has ended high-level contact with the Obama administration, according to diplomatic officials and sources close to the Russian leadership. The move signals an end to the diplomacy, for now.
“Putin will not talk to Obama under pressure,” said Igor Yurgens, Chairman of the Institute for Contemporary Development, a prominent Moscow think tank, and a close associate of Russian Prime Minister Dmitry Medvedev. “It does not mean forever.”
Obama and Putin last spoke over the phone on April 14, a call that the White House said was initiated at Moscow’s request. Obama urged Putin in the call to end Kremlin support for armed, pro-Russian activists creating unrest in eastern Ukraine. Obama also warned that the U.S. would impose more “costs” on Russia if Putin continued his current course. According to the Kremlin’s readout of the call, Putin denied Russian interference in eastern Ukraine and said “that such speculations are based on inaccurate information.”
Obama and Putin have spoken to each other about Ukraine regularly over the past weeks, including calls on March 28, March 16, and March 6. But that these calls are now on hold for the indefinite future, due to their lack of progress and frustration on both sides.
On Friday, Kerry warned that new round of American financial assaults on Russia were on the way. “We are putting in more sanctions, they will probably come Monday at the latest,” he said in a private meeting in Washington, according to an attendee. Russian businesses and individuals close to Putin would be on the sanctions list, he added.
Diplomatic sources close to the process confirmed that Putin is not interested in speaking with Obama again in the current environment. The two leaders might talk again in the future but neither side is reaching out for direct interaction, as they had been doing since the Ukraine crisis began. The failure of the agreement struck last week in Geneva between the contact group of the U.S., EU, Russia, and Ukraine has made further direct Washington-Moscow interactions moot.

“‘We are putting in more sanctions, they will probably come Monday at the latest,’ Kerry said. Russian businesses and individuals close to Putin would be on the sanctions list, he added.”

Other top U.S. officials are also now out of direct contact with their Russian interlocutors. Defense Secretary Chuck Hagel is also getting the cold shoulder from his Russian counterpart Sergey Shoygu. Pentagon officials have reached out to Russia on Mr. Hagel’s behalf within the past 24 hours but have not gotten any response, according to Pentagon Spokesman Army Col. Steve Warren.
That leaves the channel between Secretary of State John Kerry and Russian Foreign Minister Sergei Lavrov as the only semi-functioning high-level diplomatic channel between Washington and Moscow. But even that often-frosty relationship has further chilled as the two sides hurled insults and accusations this week.
After speaking over the phone Monday and then again Tuesday about the now defunct Geneva agreement on Ukraine, Kerry and Lavrov are now conducting diplomacy through the press—and leveling harsh and undiplomatic charges against one another.
Kerry appeared at the State Department press room Thursday afternoon to declare publicly that Russia was not keeping its word.
“For seven days, Russia has refused to take a single concrete step in the right direction,” Kerry scolded. “Not a single Russian official, not one, has publicly gone on television in Ukraine and called on the separatists to support the Geneva agreement, to support the stand-down, to give up their weapons, and get out of the Ukrainian buildings. They have not called on them to engage in that activity. “
Kerry also lashed out at Russia Today, the Kremlin-sponsored television network, which Kerry said spends all its time “to propagandize and to distort what is happening or not happening in Ukraine.”
“Instead, in plain sight, Russia continues to fund, coordinate, and fuel a heavily armed separatist movement in Donetsk,” Kerry accused.
Lavrov publicly responded, “The U.S. is trying to pervert everything that is going on in Ukraine.”
On Friday, Kerry summed up his recent interactions with his Russian counterpart,  “I’ve had 6 conversations with Lavrov in the last few weeks. The last one was Kafka-esque... It was bizarre.”
Credit to The DeadlyBeast.com
Posted by Unknown at 8:00 AM No comments: Links to this post

Celente: No end in sight to Ukrainian crisis

Is Someone Betting Furiously That The Chinese Currency Collapses By The End Of 2014?

Last week, USDCNY began to accelerate lower and break across the "real pain" threshold that we have been discussing for many of the world's so-called "hedgers" who have been riding the one-way strengthening trend of the CNY for years and piled in with leveraged trades on what had been a one-way bet.
The collapse this week, to levels not seen since pre-BoJ QQE and pre-Fed QE3 appeared to trigger an avalanche of unwinds or hedges of the exposures we have been worrying about. As the chart below shows, billions of dollars of upside calls on USDCNY were purchased on Friday with serious size out to 6.65 strikes (levels not seen since 2009) by the end of 2014.

The losses are mounting, as we explained in great detail here...
Simply put, if the CNY keeps going (whether by PBOC hand or a break of the virtuous cycle above), then things get ugly fast...
How Much Is at Stake?
In their previous note, MS estimated that US$350 billion of TRF have been sold since the beginning of 2013. When we dig deeper, we think it is reasonable to assume that most of what was sold in 2013 has been knocked out (at the lower knock-outs), given the price action seen in 2013.

Given that, and given what business we’ve done in 2014 calendar year to date, we think a reasonable estimate is that US$150 billion of product remains.

Taking that as a base case, we can then estimate the size of potential losses to holders of these products if USD/CNH keeps trading higher.

In round numbers, we estimate that for every 0.1 move in USD/CNH above the average EKI (which we have assumed here is 6.20), corporates will lose US$200 million a month. The real pain comes if USD/CNH stays above this level, as these losses will accrue every month until the contract expires. Given contracts are 24 months in tenor, this implies around US$4.8 billion in total losses for every 0.1 above the average EKI.

And clearly the hedging of those losses is underway en masse... (the size of the circles is the notinal being hedged - we have highlighted a few for context) as it is clear, hedgers are concerned that CNY would weaken to 6.65 or beyond by the end of the year

The escalation of the unwind in recent days suggests the vicious circle is beginning.

Finally, putting aside speculative trader P&L losses, many of which are said to be of Japanese origin and thus will hardly enjoy much or any PBOC sympathies, here is CLSA's Russel Napier on what the long-tern fate of the Renminbi will be:

“Mercantilist alchemy transmutes China’s external surpluses into foreign exchange reserves and renminbi. But with capital outflows from China at record highs, those surpluses are only maintained due to its citizens’ foreign-currency borrowing. Bank-reserve and M2 growth are already near historical lows and are driving tighter monetary policy. This will lead to severe credit-quality issues and force the authorities to accept a credit crunch or opt for a major devaluation of the renminbi. They will do the latter; and despite five years of QE, the world will get deflation anyway.”


Zero Hedge
Posted by Unknown at 6:00 AM No comments: Links to this post