Hurricane Harvey Has Dumped 15 Trillion Gallons Of Water On Texas And May Be The Most Expensive Natural Disaster In U.S. History 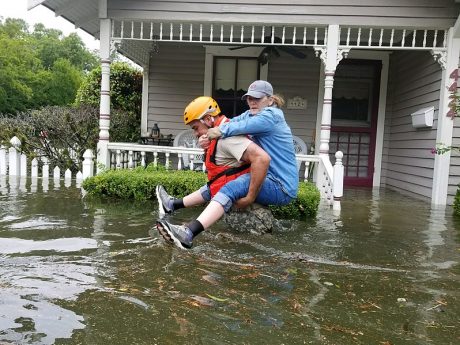 Authorities are now telling us that Hurricane Harvey may end up causing more economic damage than even Hurricane Katrina did.  We already knew that some parts of southeast Texas are going to be “uninhabitable for an extended period of time”, but the latest forecasts are calling for about 10 more inches of total rain than had previously been projected.  At this moment 15 trillion gallons of water have already been dumped on Texas, and the rain continues to fall.  You can get some idea of the devastation that has taken place in Houston by watching this drone footage.  Essentially, some communities along the southeast Texas coastline have been totally destroyed.
It would be bad enough if 15 trillion gallons of water were dropped anywhere in the continental United States, but for it to happen in the Houston area makes it a disaster of unprecedented proportions.  Houston is our fourth largest city, and that means that millions upon millions of people are being deeply affected by this storm.  As I mentioned above, some experts now believe that this could end up being the most expensive natural disaster in our history…

Tropical Storm Harvey has dropped more than 15 trillion gallons of water on Texas, triggering catastrophic, unprecedented flooding in the Houston area. The rains have broken all-time records, exceeding the rainfall totals seen during Tropical Storm Allison in 2001.
There may be no parallel available to any other rainstorm in U.S. history, based on the number of people affected, amount of water involved, and other factors, meteorologists have warned.
Due to its wide geographic scope across America’s 4th-largest city, the ensuing flood disaster may rank as one of the most, if not the most, expensive natural disaster in U.S. history.

And 15 trillion gallons is just the current number.  Meteorologists are forecasting that another 6 trillion gallons of water will fall on Texas before this storm is over.
Just yesterday, authorities were warning that some areas may see more than 40 inches of total rain, but now many forecasts are calling for “as much as 50 inches of rain” before Hurricane Harvey finally leaves Texas…

As the water rose, the National Weather Service issued another ominous forecast: Before the storm is gone, some parts of Houston and its suburbs could get as much as 50 inches of rain. That would be the highest amount ever recorded in Texas.
FEMA’s Long predicted that the aftermath of the storm would require FEMA’s involvement for years.
“This disaster’s going to be a landmark event,” Long said.

If these forecasts are accurate, the rainfall levels will exceed any previous record.
In fact, the amount of rain that has already fallen on southeast Texas would be enough to completely fill the Great Salt Lake in Utah, and then fill it all the way to the top again.
FEMA officials are already saying that they are going to be in the Houston area for “years”.  Tens of thousands are already using temporary shelters, and it is being projected that 450,000 people will ultimately file for disaster assistance…

U.S. emergency management officials said on Monday they were expediting federal resources to Texas to help with rescue efforts after Hurricane Harvey swamped coastal areas of the state and forced 30,000 people to seek refuge in temporary shelters.
Federal Emergency Management Agency Administrator Brock Long said more than 450,000 people were expected to seek disaster assistance due to flooding after Harvey made landfall during the weekend before weakening to tropical storm status.

Of course whenever there is a disaster such as this, bad people are going to try to take advantage of the situation.
According to Houston police chief Art Acevedo, a number of looters have already been arrested…

Acevedo also said officers are focused on protecting the city from looters as floodwater recede.
“We’ve already arrested a handful of looters. We’ve made it real clear to our community we’re going to do whatever it takes to protect their homes and their businesses,” Acevedo said. “And when people come from the outside to Houston, Texas, know we’re going to be out in the city, we’re not going to rest as a police department or law enforcement community until people restore their lives.”

I am proud of how the Trump administration and the authorities down in Texas are responding to this unprecedented crisis.  The loss of life appears to be minimal so far, and thousands of people have been rescued from their homes and vehicles.
We never give emergency responders the credit that they deserve.  Day after day they are saving lives in the most difficult of situations, and I am so thankful for all of the wonderful people that are working so hard to help Houston pull through this.
Please keep the people of Houston in your prayers, because this is truly the worst crisis that city has ever seen.


Posted by Unknown at 3:00 PM No comments: Links to this post

Record Amount of Cash Withdrawn from the Stock Market-Is the Game Over? A record amount of cash has been withdrawn from the Stock Market. What does it mean? Is your investment in trouble? Here’s the latest on this breaking story…

Gender 'X' could soon be an option on California state IDs

California could become the U.S. state with the most fluid definition of gender on its official state IDs if a bill making its way through the legislature becomes law.

The California Senate has already passed SB179, which would introduce a third gender option for state identification. Currently, driver’s licenses and other forms of official identification only contain options for male or female. The bill would allow a third option, which would likely be ‘X,’ according to the San Francisco Chronicle.

The bill allowing people to identify as “nonbinary” will be considered in the California Assembly. It would also make it easier for transgender people to make sure legal state documents appropriately reflect their gender.

“It’s liberating to be able to say, ‘Yes, this is who I am,’ and, ‘Yes, my state documentation matches that,’” Dee Shull, who identifies as gender fluids, told the San Francisco Chronicle.

The Mark Of The Beast Has Begun: Mainline Christian Groups Banned From Amazon

North Korea fired a missile that flew over Japan and landed in waters off the northern region of Hokkaido early on Tuesday, marking a sharp escalation of tensions on the Korean peninsula according to Reuters. The missile test, which experts said was an intermediate-range Hwasong 12 missile, came as U.S. and South Korean forces conduct an annual military drill, against which North Korea strenuously objects.
South Korea’s military said the missile was launched from the Sunan region near Pyongyang at 5:57 a.m. local time and flew 2,700 km (1,680 miles), reaching an altitude of about 550 km (340 miles). Japanese's NHK broadcaster reported the missile broke into three pieces and fell into waters off Hokkaido.

Source: CNN
“North Korea’s reckless action is an unprecedented, serious and grave threat to our nation,” Japanese Prime Minister Shinzo Abe told reporters. Abe said Japan was seeking an urgent meeting at the United Nations to strengthen measures against Pyongyang as the test was a clear violation of UN resolutions and the government had protested against the move in the strongest terms.
Japan’s Chief Cabinet Secretary Yoshihide Suga said the latest North Korean missile fell into the sea 1,180 km (735 miles) east of the Cape of Erimo on Hokkaido. He said that the Japanese military did not attempt to shoot down the missile, which passed over Japanese territory around 6:07 a.m. local time (2107 GMT).
"We are still in the process of assessing this launch. North American Aerospace Defense Command (NORAD) determined the missile launch from North Korea did not pose a threat to North America," Pentagon spokesman Army Col. Rob Manning said in a statement.
The last time North Korea fired what it said was a rocket carrying a communications satellite into orbit over Japan in 2009, however the US and other nations at the time said the launch was a ballistic missile test.
Shortly after the launch, The Japanese government’s J-Alert system broke into radio and TV programming, warning citizens of the possible missile and urging them to take refuge in solid buildings or underground shelters. Bullet train services were temporarily halted and warnings went out over loudspeakers in towns in Hokkaido.
Global markets reacted to the escalation in tensions, buying safe-haven assets such as gold, the Swiss franc and the Japanese yen, and selling stocks.
Credit to Zero Hedge