There is a space-time vortex around Earth

May 4, 2011: Einstein was right again. There is a space-time vortex around Earth, and its shape precisely matches the predictions of Einstein's theory of gravity.

Researchers confirmed these points at a press conference today at NASA headquarters where they announced the long-awaited results of Gravity Probe B (GP-B).


"This is an epic result," adds Clifford Will of Washington University in St. Louis. An expert in Einstein's theories, Will chairs an independent panel of the National Research Council set up by NASA in 1998 to monitor and review the results of Gravity Probe B. "One day," he predicts, "this will be written up in textbooks as one of the classic experiments in the history of physics."

Time and space, according to Einstein's theories of relativity, are woven together, forming a four-dimensional fabric called "space-time." The mass of Earth dimples this fabric, much like a heavy person sitting in the middle of a trampoline. Gravity, says Einstein, is simply the motion of objects following the curvaceous lines of the dimple.

If Earth were stationary, that would be the end of the story. But Earth is not stationary. Our planet spins, and the spin should twist the dimple, slightly, pulling it around into a 4-dimensional swirl. This is what GP-B went to space in 2004 to check.

The idea behind the experiment is simple:

Put a spinning gyroscope into orbit around the Earth, with the spin axis pointed toward some distant star as a fixed reference point. Free from external forces, the gyroscope's axis should continue pointing at the star--forever. But if space is twisted, the direction of the gyroscope's axis should drift over time. By noting this change in direction relative to the star, the twists of space-time could be measured.

In practice, the experiment is tremendously difficult.

The four gyroscopes in GP-B are the most perfect spheres ever made by humans. These ping pong-sized balls of fused quartz and silicon are 1.5 inches across and never vary from a perfect sphere by more than 40 atomic layers. If the gyroscopes weren't so spherical, their spin axes would wobble even without the effects of relativity.

According to calculations, the twisted space-time around Earth should cause the axes of the gyros to drift merely 0.041 arcseconds over a year. An arcsecond is 1/3600th of a degree. To measure this angle reasonably well, GP-B needed a fantastic precision of 0.0005 arcseconds. It's like measuring the thickness of a sheet of paper held edge-on 100 miles away.

"GP-B researchers had to invent whole new technologies to make this possible," notes Will.

They developed a "drag free" satellite that could brush against the outer layers of Earth's atmosphere without disturbing the gyros. They figured out how to keep Earth's magnetic field from penetrating the spacecraft. And they created a device to measure the spin of a gyro--without touching the gyro. More information about these technologies may be found in the Science@NASA story "A Pocket of Near-Perfection."

Pulling off the experiment was an exceptional challenge. But after a year of data-taking and nearly five years of analysis, the GP-B scientists appear to have done it.

"In the opinion of the committee that I chair, this effort was truly heroic. We were just blown away," says Will.

Imperialism in the making


Please Stop a moment and think about this article:
Finally openly admit that evolution is unlikely
That there are gaps in human development could never explain (though they always denied)
And now these spaces of evolution they could never explain say that are the result of aliens.
How do you know they are aliens and is not information that is not yet known?? ...FROM GOD'S Creation!!!
But do not be surprised because maybe this time they are telling the truth, because just like the days of Noah, men were mixed with the demons and people born genetically contaminated (Giants at that time)
That's one of the reasons of the flood...
As the Bible says it would be at the end of time.

This is Satanic to the top!!!

A group of researchers working at the Human Genome Project indicate that they made an astonishing scientific discovery: They believe so-called 97% non-coding sequences in human DNA is no less than genetic code of extraterrestrial life forms.

The non-coding sequences are common to all living organisms on Earth, from moulds to fish to humans. In human DNA, they constitute larger part of the total genome, says Prof. Sam Chang, the group leader. Non-coding sequences, originally known as "junk DNA", were discovered years ago, and their function remained a mystery. The overwhelming majority of Human DNA is "Off-world" in origin. The apparent "extraterrestrial junk genes" merely "enjoy the ride" with hard working active genes, passed from generation to generation.

After comprehensive analysis with the assistance of other scientists, computer programmers, mathematicians, and other learned scholars, Professor Chang had wondered if the apparently "junk Human DNA" was created by some kind of "extraterrestrial programmer". The alien chunks within Human DNA, Professor Chang further observes, "have its own veins, arteries, and its own immune system that vigorously resists all our anti-cancer drugs."

Professor Chang further stipulates that "Our hypothesis is that a higher extraterrestrial life form was engaged in creating new life and planting it on various planets (How does he know??? Is he a scientist?). Earth is just one of them. Perhaps, after programming, our creators grow us the same way we grow bacteria in Petri dishes. We can't know their motives - whether it was a scientific experiment, or a way of preparing new planets for colonization, or is it long time ongoing business of seedling life in the universe."

Professor Chang further indicates that "If we think about it in our human terms, the apparent "extraterrestrial programmers" were most probably working on "one big code" consisting of several projects, and the projects should have produced various life forms for various planets. They have been also trying various solutions. They wrote "the big code", executed it, did not like some function, changed them or added new one, executed again, made more improvements, tried again and again."

Professor Chang's team of researchers furthermore concludes that, "The apparent "extraterrestrial programmers" may have been ordered to cut all their idealistic plans for the future when they concentrated on the "Earth project" to meet the pressing deadline. Very likely in an apparent rush, the "extraterrestrial programmers" may have cut down drastically on big code and delivered basic program intended for Earth."

Alex Colliers alleged contact with ETs suggest that fundamentalist messages in from Christianity to Judaism to Islam, and other institutionalized religions, as well as outright apparent 'cult' groups, have been specifically placed by "hostile elements" to manipulate and control humankind. JAPAN'S economy contracted at a much-worse-than-expected 3.7 per cent annualised rate in the March quarter, tipping the country into recession as the March 11 earthquake and tsunami caused declines in consumer spending, business investment and private-sector inventories.

But the country's economy minister put on a brave face, saying that the economy is likely to grow for the fiscal year on the back of reconstruction demand, and added that there was no need now to come up with additional spending measures.

Japan's real GDP for the March quarter fell 0.9 per cent from the previous quarter, or an annualised rate of 3.7 per cent, according to figures released by the Cabinet Office. On a quarter-to-quarter basis, GDP was down a price-adjusted 0.9 per cent, down for the second consecutive quarter.

The contraction was almost double the annualised 2 per cent drop expected by economists surveyed by Dow Jones Newswires. GDP, or the total value of goods and services produced by the nation, shrank a revised annualised 3 per cent in October-December.

The first quarter decline was the sharpest since a record 18.3 per cent contraction in January-March 2009, according to the data.

Two quarterly falls in GDP -- an often-used definition of a technical recession -- is also the first successive contraction since the four straight quarters of decrease from April 2008 through March 2009 amid the global financial crisis.

The data underline how the worst natural disaster to hit Japan in decades has foiled pre-quake expectations that the export-driven economy would escape a northern winter lull in the first quarter, as overseas demand improves.

A survey of 43 economists conducted before the March earthquake had produced a median forecast for an annualised growth of 1.73 per cent for the first quarter. 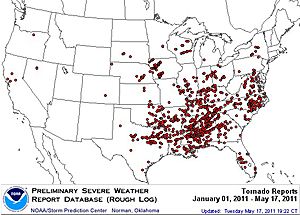 The United States suffered one of the worst tornado outbreaks in recorded history during the month of April 2011, with hundreds of deaths and nightmarish destruction.

The NOAA Storm Prediction Center received 875 tornado reports during that month alone; 625 have been confirmed as tornadoes, so far. Most of these occurred around April 15 to 16 and April 26 to 27.

Below is an animation created by NOAA's Environmental Visualization Laboratory showing the tornado activities captured by satellites through the month of April. Though the tornadoes cannot actually be seen by the images, they are symbolized as red dots. That said, each red dot in the animation represents a tornado that formed during the time.

The actual tornado locations are acquired from the NOAA Storm Prediction Center, which uses both radar and ground reports to generate a detailed database of tornadoes.