U.S. beefs up security for Navy's Fifth Fleet in Bahrain


WASHINGTON — The United States has been concerned that Shi'ite riots in Bahrain could hamper operations of the U.S. Navy's Fifth Fleet.


Officials said the administration of President Barack Obama has been closely monitoring the Shi'ite unrest in Bahrain. They said security has been reinforced around the U.S. Navy's Fifth Fleet, responsible for operations throughout the Gulf and Red Sea.

"So far, this is not about us yet," an official said.

Officials said the Defense Department and State Department have been in constant contact with the Bahraini kingdom amid the Shi'ite riots around Manama. They said the administration was urging the Sunni regime to avoid a bloody confrontation with the protesters in wake of the death of two Shi'ites.
"The United States welcomes the government of Bahrain's statements that it will investigate these deaths, and that it will take legal action against any unjustified use of force by Bahraini security forces," State Department spokesman Philip Crowley said on Feb. 15. "We urge that it follow through on these statements as quickly as possible."
In 2010, the Fifth Fleet launched a project to expand its headquarters in Bahrain. The project included the takeover and modernization of an antiquated civilian port designed to accommodate large naval vessels.


hostgator coupon 2011
Posted by Unknown at 8:05 AM No comments: Links to this post 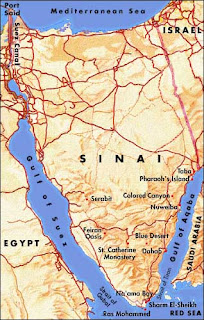 The recent revolution in Egypt has had its effect on the Sinai Peninsula as well. Mass demonstrations by the Egyptian police have broken out in the northern Sinai in recent weeks, the Palestinian Authority-based Ma’an News Agencyreported on Wednesday. According to the report, the demonstrators are protesting against their low quality of living as well as against the fact that they are forced to live in constant danger of death and kidnappings by lawless marauders.

Ma’an reported that the demonstrators gathered in front of the security administration building in the northern Sinai and demanded that the rules of martial law cease to be applied to them, that their wages be raised and that protection be offered to them from gunmen who chased after them and burned down their homes in the city of El-Arish. They also demanded that security director Mohammad Najib and his assistant be dismissed from their positions.

According to the reports coming from the region, there is a state of anarchy in the northern Sinai Peninsula. More than ten days ago three police officers were kidnapped, and their cars were subsequently found burnt in the suburbs of El-Arish. In addition, it has been reported that dozens of policemen are hiding and fearing for their lives. Police officers serving at the Rafah border crossing have been harassed daily by militants who attack them as they return to their homes, beating them and forcing them to crawl on the ground.

According to data released by local security and medical officials, approximately 35 police officers and civilians have been killed since the beginning of the riots in northern Sinai. About 150 people have been wounded.

hostgator coupon 2011
Posted by Unknown at 7:50 AM No comments: Links to this post