The Growing Religion Inside The AI Community That Anticipates A Terrifyingly Synthetic, All-Powerful “God” 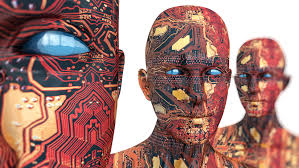 When the singularity is conceived as an entity or being, the questions circle around what it would mean to communicate with a non-human creature that is omniscient, omnipotent, possibly even omnibenevolent. This is a problem that religious believers have struggled with for centuries, as they quested towards the mind of God […]

In one notorious case from 2014, singularitarians posited a strictly utilitarian superintelligence known as ‘Roko’s Basilisk’. It was named after Roko, the user who first proposed it on the rationalist blog LessWrong, and the Basilisk, a mythological creature that was believed to kill people with its stare. In Roko’s version, the creature was described as a near-omnipotent AI entity.

Because the Basilisk acts relentlessly to create the greatest good for the greatest number, and logically deduces that only its existence can ensure this outcome, it creates an incentive to bring itself into existence: it will punish any humans, even after their death, who don’t put their efforts into trying to create it.

The mechanism behind this punishment is complex – but suffice it to say that, once you know about the Basilisk, you face a possible eternity in a computer-simulated prison, thanks to the Basilisk’s super-predictive powers and its capacity to manipulate cause and effect.

Russia Vows to Shoot Down Any Aircraft West of Euphrates River

Are These The Only Options The Elite Have Left, If So It Won't End Well


NATO officials are growing increasingly nervous about the possibility of an invasion of the Baltic states ahead of Russian wargames planned this fall on the border of Belarus and Poland that could involve as many as 100,000 troops. That "anxiety" was on display this week, when US and British troops carried out the first NATO military exercise that involved a simulated defense of the Suwalki Gap, an area in northern Poland on the border with Lithuania that serves as the gateway to the Baltic region.

In other words, a drill against a Russian invasion of the Baltics states, and by extension, Europe.

NATO officials described the area as a “choke point” that, if it were taken by an invading force, could potentially isolate the Baltic states from their NATO allies, according to Reuters.

"The gap is vulnerable because of the geography. It's not inevitable that there's going to be an attack, of course, but ... if that was closed, then you have three allies that are north that are potentially isolated from the rest of the alliance", said U.S. Lieutenant General Ben Hodges.

"We have to practice, we have to demonstrate that we can support allies in keeping (the Gap) open, in maintaining that connection," he said.

Since Russia’s annexation of Ukraine back in 2014, NATO has shifted four battlegroups totaling just over 4,500 troops to Estonia, Latvia, Lithuania and Poland.

US and UK aircraft took part in the exercises, alongside troops from Poland, Lithuania and Croatia in a simulated defense of the potential flashpoint in an area several hours' drive from where a U.S. battalion is stationed at Orzysz base in Poland, Reuters reported.

Of course, Russia has repeatedly said it has no plans to invade the Baltics, and has warned that the "defensive" buildup in NATO forces against its borders is an unprovoked act of aggression againt Russia.

However, Russia's protests have done little to sway the US Senate, which passed new sanctions against Russia this week, allegedly in retribution for Russia’s meddling in the US election. The measures were included in an Iran sanctions bill that was widely expected to pass, but as the Hill reported yesterday, President Donald Trump is leaning on House Republicans to drop the bill because he fears it could damage US-Russia relations.

In addition to Trump, Germany and Austria have also voiced their displeasure for one measure outlined in the sanctions bill, asking the US drop its opposition to the Nord Stream 2 pipeline that would pump Russian gas to Germany beneath the Baltic Sea. Austria's Chancellor Christian Kern and Germany's Foreign Minister Sigmar Gabriel said earlier this week that it appeared that the opposition of the pipeline was aimed at securing US energy jobs and pushing out Russian gas deliveries to Europe.

“Europe's energy supply is a matter for Europe, and not for the United States of America," Kern and Gabriel said.

Meanwhile, NATO acknowledged the symtoblic nature of the drills, saying the exercises were more of a gesture than a dress rehearsal for war. As Brigadier General Valdemaras Rupsys, head of Lithuania's land forces, explained, “this is only a small-scale drill compared to what would be needed in case of a real attack.”

Via StockBoardAsset.com,
It’s no secret that America’s infrastructure is in dire need of repairs. Earlier this year, America received her infrastructure report card from the American Society of Civil Engineers’ and received a repulsive D+. The ASCE guesstimates the US would need to spend $4.5 trillion by 2025 on infrastructure.
Here’s the breakdown of the report card:
With that being said, I’ve spent the entire weekend inspecting America’s infrastructure at the Port of Baltimore.
At some locations, I was given special access to a behind the scenes view of America’s crumbling infrastructure that the public is not allowed to see. The reasons you’re left out of the know is because it destroys the mainstream narrative that everything is awesome.


Even Jack Ma, the founder of Alibaba Group says, “the US wasted trillions on warfare instead of investing in infrastructure”.
In the Sunday Edition, Alastair Williamson is on site at a marine terminal in the Port of Baltimore. He provides an interesting view of America’s deteriorating infrastructure blended with the current shape of the US economy.