Posted by Unknown at 8:00 PM No comments:

Why Is Obama Moving Troops Into Poland And Provoking A War With Russia Right Before The Inauguration? 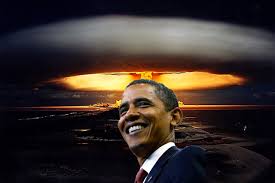 January 20th cannot come soon enough.  Instead of stepping back and trying to ensure a smooth transition for Donald Trump, Barack Obama has decided to go hog wild and use every ounce of presidential power still available to him.  He has been establishing a bunch of new national monuments, he just stabbed Israel in the back at the United Nations, and on Thursday he even took time to give Joe Biden a Presidential Medal of Freedom.  But one of the things that has people the most concerned is his endless provoking of Russia.  Every few days it seems like Obama is doing something else to aggravate Russia, and if he wasn’t leaving office in about a week I am sure that the mainstream media would be full of speculation about a possible war.
Lame duck presidents are not supposed to make risky moves like this once a new president has been elected.  On Thursday, we learned that U.S. troops have been permanently deployed to Poland for the very first time…

American soldiers rolled into Poland on Thursday, fulfilling a dream some Poles have had since the fall of communism in 1989 to have U.S. troops on their soil as a deterrent against Russia.
Some people waved and held up American flags as U.S. troops in tanks and other vehicles crossed into southwestern Poland from Germany and headed toward the town of Zagan, where they will be based. Poland’s prime minister and defense minister will welcome them in an official ceremony Saturday.

Poland was once a key member of the Warsaw Pact alliance, and the Russians are quite alarmed that U.S. troops will now be stationed so close to the Russian heartland.  The following comes from ABC News…

“These actions threaten our interests, our security,” President Vladimir Putin’s spokesman Dmitry Peskov said Thursday. “Especially as it concerns a third party building up its military presence near our borders. It’s not even a European state.”

And it has also been announced that NATO troops will arrive in Lithuania in late January.  If you will remember, Lithuania was actually part of the Soviet Union during the Cold War.
All of a sudden, Russia has become enemy number one.  Barack Obama and Hillary Clinton say that Russia is to blame for Clinton’s election loss, and so at the end of December Obama expelled 35 Russian diplomats from the country.
That is the sort of thing that you do before a war starts.
Over in Europe, they are so freaked out about potential Russian interference in their elections that they are “erecting defenses to counter possible Russian cyber attacks”…

Nations in Europe, where Germany and France this year hold elections, are erecting defenses to counter possible Russian cyber attacks and disinformation to sway Western politics, but intelligence experts say this might be too little and too late.
The issue of Russian “influence operations” has taken on new urgency after U.S. intelligence agencies released a non-classified assessment that President Vladimir Putin ordered a campaign to move the U.S. election in favor of Donald Trump.
European nations and NATO are setting up centers to identify “fake news”, bolstering cyber defenses and tracking use of social media which target Russian-speaking communities, far-right groups, political parties, voters and decision-makers.

Back in 2012, Barack Obama mocked Mitt Romney for saying that Russia was a serious threat to our national security.  He even joked that the 1980s were calling Romney because they wanted their foreign policy back.
At that time, Barack Obama boldly declared that the Cold War had been over for 20 years.  But now here we are just four years later and Barack Obama has gotten us into a new Cold War.  The crisis in Ukraine, the civil war in Syria, the price of oil, cyber-espionage and a whole host of other issues have brought tensions between the United States and Russia to a boiling point.
Many are hoping that relations with Russia will improve during the Trump administration, but the truth is that things could go either way.
It is important to remember that Trump will be surrounded by military people that are virulently anti-Russia.  For example, retired Marine General James Mattis has been nominated to be Defense Secretary, and this week he told Congress that Russia is the “principal threat” to U.S. security…

While much of the hearing has so far been without controveries, in the most striking moment so far, Mattis told the Senate Armed Services Committee that Russia stands as the “principal threat” to the United States’s security. He said this is because of its actions and efforts to “intimidate” other countries.
Senator John McCain questioned Mattis to get his opinion on how much of a threat Russia represents. Mattis response was that the world order is “under biggest attacks since WW2, from Russia, terrorist groups, and China’s actions in the South China Sea”, agreeing with the neocon senator that Russia is trying to break up NATO.
“I’m all for engagement” with Russia, “but we also have to recognize the reality of what Russia is up to,” Mattis told Senator Jack Reed (D-Rhode Island).

There is a great deal of concern that Trump’s view of Russia could be significantly shaped by strong military men such as Mattis.  Both Democrats and Republicans want Trump to become much more anti-Russia, and let us hope that he does not give in to the pressure.
Over in Russia, they view us very negatively as well.  A Gallup survey taken in mid-2016 found that current U.S. leadership (the Obama administration) only had a one percent approval rating in Russia.
Yes, you read that correctly.
You can’t get much lower than one percent.
The Russians consider themselves to be the great force for good in the world, and they consider the United States to be the great force for evil.  They openly talk about the possibility of nuclear war on their news broadcasts, and on one recent broadcast people were actually encouraged to locate the closest nuclear bomb shelter to their homes.
And in response to U.S. troops being deployed to Poland, the Russian government has deployed advanced anti-aircraft missile systems around Moscow…

Russia has deployed anti-aircraft missile systems around Moscow to protect the capital from attack in the latest sign Vladimir Putin is preparing for war.
The s-400 Triumph air defence system has been providing air cover for Russian forces in Syria since November, and is now being deployed on home soil.
It is capable of hitting moving airborne targets including planes and incoming missiles and has a range of 400km.

We should be very thankful that Barack Obama is leaving office, because right now we are on a path that leads to war with Russia.
Every American should be hoping that Donald Trump will work to greatly improve relations with the Russians, but all it would take is one wrong move for things to start deteriorating once again.
A new Cold War has begun, and as I recently told a live studio audience at Morningside, the stakes are incredibly high…
Credit to Economic Collapse

Preparation for war, not defense against Russia

US Military Press Conference: “Prepare For World War 3 With Russia”

US and NATO Generals have told reporters at a press briefing that they should prepare for “World War 3 with Russia” in the very near future.

NATO and US forces have bolstered their military forces on the Russian border, installing anti-ballistic missile systems and equipment in an effort to provoke a nuclear war with Russia.

In response, Russian President Vladimir Putin has deployed anti-aircraft missile systems around Moscow to protect the country from a massive attack.

The S-400 Triumph air defence system is capable of hitting moving US and NATO planes and missiles, and has a range of 400km.
Credit to yournewswire.com
http://yournewswire.com/us-military-world-war-3-russia/