Because the bible predicts this events, we publish 4 hours ago a list of "you must have at home"
3 hours after of our publish came the quake... 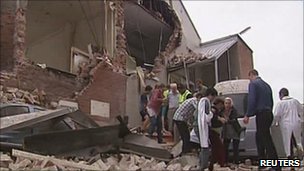 Multiple fatalities have been reported after a powerful 6.3-magnitude earthquake struck Christchurch on New Zealand's South Island, police say.
The powerful tremor, which struck at 1251 on Tuesday (2351 GMT on Monday) only 10km (6.2 miles) south-east of the city, caused widespread destruction.
Christchurch's mayor said there were "scenes of great confusion" as people gathered in the streets for safety.
The damage is said to be worse than after September's 7.1-magntiude quake.
Two people were seriously injured by the tremor, whose epicentre was further away and deeper. It caused an estimated $3bn in damage.
There have been several aftershocks since last September's quake, with a 4.9 magnitude tremor hitting just after Christmas.
'Very populated time'
TV pictures of the aftermath of Tuesday's earthquake showed several collapsed buildings in the centre of Christchurch.
People could be seen wandering the rubble-filled streets in distress.
The city has run out of ambulances, and private vehicles are being used to ferry the injured to triage centres. The city's main hospital has been evacuated.
Christchurch Mayor Bob Parker said he was on the top floor of the city council building when the quake hit, throwing him across the room.
"I got down onto the street and there were scenes of great confusion, a lot of very upset people. I know of people in our building who are injured and I've had some reports of serious injuries throughout the city."
"What I can see from where I am in the central city is that there are significant amounts of additional damage," he added.
Local police said there were reports of multiple fatalities, including that two buses had been crushed by falling debris. There were also reports of fires and of people being trapped in collapsed buildings, they added.
Radio New Zealand reported that its staff had to cling to their desks during the tremor, and that a church near its offices had collapsed.
Concrete in Victoria Square had risen at least a metre in some places and there are signs of liquefaction around the Avon river, it added.
Prime Minister John Key people were being told to get out of the city.
"The details we have are extremely sketchy," he said.
"The worrying fear, of course, is that this earthquake has taken place at a time when people were going about their business - it is a very populated time, with people at work, children at school. Sadly, I cannot rule out that there have been fatalities."
"But we are aware of significant damage to buildings that had people in them at the time," he added.

A "must have" at home in case of an emergency


Clothing
Complete change of clothing*
Current prescription glasses
Dust Masks, three extra
Gas Mask if you are living in one of the top 120 major cities
Rain Poncho OR Rubberized Parka and Rain Pants (oversized to allow for clothes layering)
Sturdy boots and Heavy Socks
Sunglasses
Underwear, 2 sets
Work Gloves, heavy duty
*The majority of people will need to consider seasonal changes. Every season, make sure to update your stored change of clothes for the appropriate weather conditions. For winter, include coats, hats, gloves, thermal underwear, snow boots and clothes for layering.

Communication Items
Radio (solar, hand cranked or battery powered; if battery, include extra batteries)
$200 in cash and change (during times of disaster, charge cards and checks can't be verified)*
Compass of good quality (these are expensive but necessary)
Map of your local area
Notepad
Pencil, Pen
Phone numbers and addresses of friends/family
Pre-addressed, stamped postcards of friends and family out-of-state (if a disaster is widespread, you'll want to contact someone out of the area)
Signal Flares, three (these are not legal in Australia)
Signal Mirror
Signal Whistle
*Money is always hard to tuck away and pretend it isn't there, but in this instance, it is a necessity. One can't assume to put expenditures on credit cards during a crisis. Think about it. Whenever you make a purchase, it is always verified by a telephoned authorization number. If phone lines are down and these numbers are not obtainable, chances are your purchase won't be allowed.


Pet Care (if applicable)
Food and Food Bowl
Leash and Collar
Muzzle
Toys or Chew Bone
Water Bowl
Water, one gallon (4 liters) per dog per day. For a cat, it is about 1 pint.*
*(Even if it is a small animal, plan on the unexpected. SOMEBODY will undoubtedly spill their day's ration and the pet's water can be used in extreme emergency.)