The world is only one generation away from human-robot “marriages.”


The inventor of “sex robots” claims he will soon “have children” with his construction, and suggests the world is only one generation away from human-robot “marriages.”

In an interview with The Sun, a British newspaper, Sergi Santos claims his robot “Samantha” has improved his 16-year marriage. But, then he suggests he’s planning to make a new upgrade to his robot that will allow it to simulate a pregnancy and motherhood.

"I can make them have a baby. It's not so difficult. I would love to have a child with a robot. Using the brain I have already created, I would program it with a genome so he or she could have moral values, plus concepts of beauty, justice and the values that humans have," he said. "To create a child with this robot it would be extremely simple. I would make an algorithm of what I personally believe about these concepts, and then shuffle it with what she thinks and then 3-D print it. That's it. I 3-D print the robot that is the child of me and the robot ... I don't see any complications.

Santos said his invention, and others using artificial intelligence will push the boundaries, and “human rights” will one day no longer apply only to human beings:

"People might look at Samantha as a weird thing you read about. But before they know it, these robots will be doing their jobs, and marrying their children, their grandchildren, and their friends. They need to remember that just a few years ago mobile phones were seen as a non-essential item in society but now we can't function without them."

Think he’s kidding? Three months ago, the mainstream media reported on his contraptions as perversions, but now they’re replete with feel-good stories about sex robots.

Credit to Trunews
Posted by Unknown at 5:00 PM No comments: Links to this post 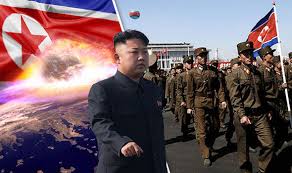 “When the righteous become great the people rejoice, But when the wicked dominate the people groan.” Proverbs 29:2 (The Israel Bible™)
In a peculiar letter to the Australian Foreign Minister, North Korean despot Kim Jong Un stated that his country is ““fully-fledged nuclear power”.

In an extraordinary manner, the letter was sent via North Korea’s embassy in Jakarta to Australia’s Indonesian embassy. Dated September 28, the letter appears to have been distributed about a week after Trump’s address to the United Nations General Assembly, when he said “the United States has great strength and patience, but if it is forced to defend itself or its allies, we will have no choice but to totally destroy North Korea.”

“If Trump thinks that he would bring the DPRK [North Korea], a nuclear power, to its knees through nuclear war threat, it will be a big miscalculation and an expression of ignorance,’ the letter read. “The DPRK has emerged a fully-fledged nuclear power which has a strong nuclear arsenal and various kinds of nuclear delivery means made by dint of self-reliance and self-development. The real foe of nuclear force is a nuclear war itself.”

“The Foreign Affairs Committee … takes this opportunity to express belief that the parliaments of different countries loving independence, peace, and justice will fully discharge their due mission and duty in realising the desire of mankind for international justice and peace with sharp vigilance against the heinous and reckless moves of the Trump administration trying to drive the world into a horrible nuclear disaster.”

Australia’s Foreign Minister, Julie Bishop, posted a photo of the letter on her Facebook page.

Though addressed to “parliaments of different countries” no other recipients have come forward.

“This is the first letter that we can find that any Australian foreign minister has received from North Korea…it’s an open letter, this is not how they usually send messages around the world,” Bishop told the Sydney Morning Herald. She understood this to be a sign that economic sanctions against the rogue Asian nation are being effective.

“I read this as showing that the collective strategy of allies and partners to impose maximum pressure and diplomatic and economic sanctions on North Korea is working; this is a very unusual step of issuing an open letter of this character,” Bishop said in the interview. “Those two UN Security Council resolutions, which were embraced by China and Russia, impose for the first time sector-wide comprehensive sanctions against DPRK. And most of those sanctions have to be implemented by China.”


Posted by Unknown at 4:00 PM No comments: Links to this post

Jonathan Cahn – When Dark Gets Darker, Lights Have to get Brighter

Posted by Unknown at 1:00 PM No comments: Links to this post


Colossians 1:17
He is before all things, and in Him all things hold together.

The most elite scientists in the world are still struggling to find why exactly our universe didn't destroy itself as soon as it came into existence. That's what science says should have happened – but it clearly hasn't, since you're here reading this, as far as we know.

At the beginning of the universe, according to the standard model, there equal amounts of matter and anti-matter. The trouble with that is that they would each have annihilated each other, leaving none of the matter that surrounds us today.

Researchers have been frantically looking for some difference between matter and anti-matter that could explain why the universe is still around. But they have tried a range of different possibilities – that they have different mass, electric charge, or something else – but have found no difference.

That has led researchers to question why the universe is still around at all.

"All of our observations find a complete symmetry between matter and antimatter, which is why the universe should not actually exist," explained Christian Smorra, the author of a new study conducted at CERN.

"An asymmetry must exist here somewhere but we simply do not understand where the difference is. What is the source of the symmetry break?"

The latest possibility was matter and anti-matter's different magnetism. But new research shows that they are identical in that way too – lending further mystery to the question of why the universe is still around at all.

The new study, led by Dr Smorra, looked to measure anti-protons to find out how they were different from the protons that surround us. They measured the anti-matter's magnetism in more precise detail than ever before, and were surprised to find that both matter and anti-matter looked exactly symmetrical.

The CERN research saw scientists capture the anti-protons in special "Penning traps", since it's not possible to hold anti-matter inside a physical container. "This tremenduous increase in such a short period of time was only possible thanks to completely new methods," said Stefan Ulmer, spokesperson of the group of researchers who conducted the work.

Email ThisBlogThis!Share to TwitterShare to FacebookShare to Pinterest
Labels: Colossians 1:17

Financial PANIC imminent as most people living paycheck to paycheck


Russia is preparing to test-launch its new generation of nuclear-armed intercontinental ballistic missile (ICBM), which it has claimed will be able to penetrate the US’ defensive shield.

Delayed several times, the tests of the RS-28’s launch and first few seconds of flight are to be carried out at the Plesetsk Cosmodrome, in Russia’s north-west, before the end of the year.

The trials had been postponed because launch silos and the projectiles themselves were not ready, according to the state-controlled Sputnik website, which cited the Kommersant newspaper.

The RS-28 Sarmat, a 100-plus-ton ICBM that government-controlled media has claimed could destroy an area the size of Texas, is designed to evade missile defences with multiple hypersonic warheads, known as MIRVs.

Talking up its capabilities, state-linked Russian sites have claimed an 11,000km range, a payload of up to 15 warheads and the ability to “speed past every missile defence system in existence”.

RIA Novosti said individual warheads could have yields up to 750kt and that RS-28 launch silos would be built to withstand seven nuclear strikes.

Outside sources cast doubt on some of these specifications. RIA said the new missile will have a “throw weight” – the mass of all components minus fuel and the launch rocket – of five tons.

But Michael Kofman, a research scientist from the Centre for Naval Analyses, told The National Interest earlier this year: “If RIA is right, and it probably is not right, how do you fit a payload of 10 warheads and tons of decoys into five tons?

“There are large questions outstanding about conflicting claims about throw-weight, warheads and penetration aids.”

Russia expects the RS-28 to enter service by the beginning of the next decade as part of its ongoing nuclear modernisation.

Putin Warns “Something Worse Than A Nuclear Bomb Is Coming...”