Why Mattis Is Threatening North Korea

Strange Sounds are Being Heard Worldwide...

How upgrading humans will become the next billion-dollar industry

Investors searching for the next transformative technology destined to turn a bunch of Ivy League dropouts into billionaires, and half the market into a loose slot machine, need only look in the mirror.

“The greatest industry of the 21st century will probably be to upgrade human beings,” historian Yuval Harari, author of the fascinating new book “Homo Deus,” told MarketWatch.
‘For the first time in history it will be possible to translate economic inequality into biological inequality.’Yuval Harari

For all of humanity’s scientific, economic and artistic achievements, we have neglected this ultimate self-improvement project, Harari said. Our bodies and brains, after all, still run on the same hardware and software that evolved some 200,000 years ago.

Alphabet’s GOOG, +1.08% GOOGL, +1.06% Google already has a unit devoted to overcoming death, Harari noted. And who can doubt that Apple AAPL, +0.03% will want to pick from this new tree of knowledge, as well, or that after conquering self-driving cars Uber, in spite of the antics of its CEO, will want to build an Übermensch?

As new technologies yield humans with much longer battery lives, killer apps and godlike superpowers, within the next six decades, if Harari is right, even the finest human specimens of 2017 will in hindsight seem like flip phones.

There is, of course, a catch. Many of us will remain flip phones, as the technology to upgrade humans to iPhones is likely to be costly, and regulated differently around the world. These advances will likely “lead to greater income inequality than ever before,” Harari said. “For the first time in history it will be possible to translate economic inequality into biological inequality.”

Such a divide could give rise to a new version of “old racist ideologies that some races are naturally superior to others,” Harari said. “Except this time the biological differences will be real, something that is engineered and manufactured.”

Credit to marketwatch.com
http://www.marketwatch.com/story/how-upgrading-humans-will-become-the-next-billion-dollar-industry-2017-04-03
Posted by Unknown at 9:00 AM No comments: Links to this post


As U.S. equity markets continue their march back toward all-time highs, courtesy of the latest BTFD binge trade, at least one 'small' segment of the U.S. economy does not seem to be participating in the rally as 9 brick-and-mortar retailers have already filed for bankruptcy protection in 1Q 2017 alone.  That volume of filings matches the total number of retail bankruptcies for all of 2016 and puts the industry on pace to exceed even the 'great recession' highs. Per CNBC:

Nine retailers have filed in just the first three months of 2017, according to data provided exclusively to CNBC from AlixPartners consulting firm. That equals the number for all of 2016. It also puts the industry on pace for the highest number of such filings since 2009, when 18 retailers resorted to that action.

The rising number of retail bankruptcies comes as consumers are making more purchases online, and shifting their spending toward travel and other experiences. Meanwhile, the supply of physical stores continues to outweigh shopper demand, putting pressure on the industry's profits.

"It's just kind of this perfect storm where things are coming together, and it's going to continue for awhile," Deb Rieger-Paganis, a managing director in the turnaround and restructuring practice at AlixPartners, told CNBC.

Many of the early retail victims include companies that were snapped up by Private Equity interests during the last down cycle and aggressively levered.  In addition to the following nine retailers that have already liquidated or are working to reorganize, Payless Shoes and Bebe are also expected to file at some point in the not so distant future.
Of course, as Deb Rieger-Paganis, a managing director in the turnaround and restructuring practice at AlixPartners, points out, retail bankruptcies and/or store closures, especially from anchor tenants, can push the whole retail space into a downward spiral as "people don't like to shop where there's a lot of vacant space."  So while larger retailers like Macy's, J.C. Penney, Sears and Kmart have avoided chapter 11 so far in this cycle, they're all in the process of closing hundreds of stores and those vacancies are likely to have ripple effects through the industry.
Meanwhile, as we pointed out last month (see "America's Desperate Mall Owners Turn To Grocers, Doctors & High Schools To Fill Empty Space"), America's mall owners are having such a hard time filling empty retail space that they're turning to high schools, doctors offices and grocery stores.
Once a shining beacon of American capitalism, malls around the U.S. are failing at an alarming rate due to a combination of shifting consumption patterns, years of underinvestment by mall owners and a spate of retailer bankruptcies over the past 12 months that have left large swaths of once prime real estate empty (see "Number Of Distressed US Retailers Highest Since The Great Recession").
Now, as the vacant square footage grows larger, mall owners are being increasingly forced to turn to non-conventional tenants to fill empty space.  Per the Wall Street Journal, the latest target of mall owners is yet another struggling industry, grocers, with everyone from Whole Foods to Kroger looking to snap up square footage at discount prices.
Natick Mall in Natick, Mass., is leasing 194,000 square feet of space vacated by J.C. Penney Co. to upscale grocer Wegmans Food Markets Inc., which is planning to open a store in 2018.
College Mall in Bloomington, Ind., plans to bring in 365 by Whole Foods Market in the fall.
Grocery giant Kroger Co., meanwhile, has purchased a former Macy’s Inc. location at Kingsdale Shopping Center in Upper Arlington, Ohio, and plans to build a new store in its place.
But we're sure it will all work out just fine and wall street will go on buying those mall reits with reckless abandon...you know, because dividend yields.
Credit to Zero Hedge

‘World Should Be Ready’ for North Korea Nuclear Attack on US, Says Defector


Thae Yong Ho has warned that the “world should be ready” for Pyongyang to conduct a nuclear strike against the US and its allies at the slightest provocation.

In an interview with NBC News the former diplomat said Pyongyang’s Supreme Leader Kim Jong-un is "desperate in maintaining his rule by relying on his [development of] nuclear weapons and ICBM [intercontinental ballistic missiles]," that could potentially reach the US mainland.

He told Lester Holt that the trigger-happy Kim is ready to respond to any aggression from Washington or its friends. "Once he sees that there is any kind of sign of a tank or an imminent threat from America, then he would use his nuclear weapons with ICBM," he said.

Leaving his post as deputy ambassador to the UK in August 2016, Thae and his family were among a group of North Korean elites that settled in South Korea, saying at the time that his college-aged sons would have been "miserable" if they returned to the North and that leaving the reclusive nation was akin to "cutting off the chain of slavery" for his family.

Thae said during his interview that the Democratic Republic of Korea (DPRK) "has reached a very significant level of nuclear development," though he was not personally involved in his country’s weapons program, adding that the North could have as many as eight nuclear weapons, which Pyongyang has been trying to integrate onto its ICBMs. 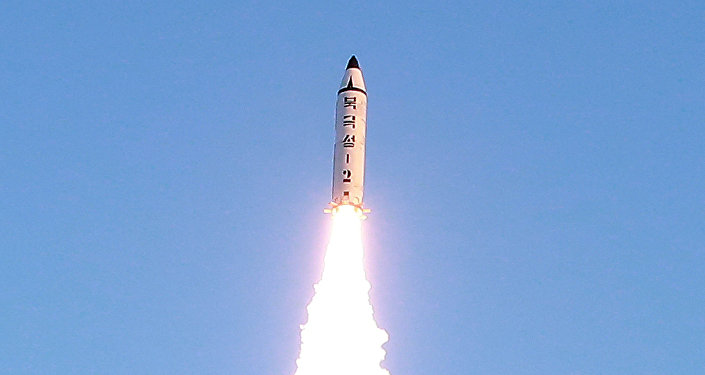 It isn’t clear how close Pyongyang is to completing this project, but in March Choe Myong Nam, deputy ambassador of the North Korean mission to the United Nations in Geneva, said Kim could launch the missiles "at any time and at any place" he chooses.

He explained, "They have the nuclear capability — they've demonstrated that … And then, where they're going with the miniaturization of that, whether they can actually weaponize a missile, that's what's driving the current concern."