Deutsche Bank Collapsing? Is This Why Germans Warned to Prepare? (N.Morgan) Since Germany issued the dire warning to its citizens to stock up on food and water, it is beginning to look as if Deutsche Bank may be collapsing.
If the leading bank in Germany collapses, the effect on Europe would be devastating, and it would be highly unlikely that the US would remain unscathed by such a collapse.
It would have a ripple effect that would travel all across the Atlantic. The Deutshe Bank’s financial woes are currently stressing the American Stock Market.
Angela Merkel has said that Deutsche Bank will not receive a bailout from the European Central Bank, which is the last resort lender of financial institutions in crisis.
The Department of Justice recently issued a $14 billion fine to the bank to settle a mortgage-backed securities probe, which the bank has no intention of paying.
“Deutsche Bank has no intent to settle these potential civil claims anywhere near the number cited,” the company said in a statement early Friday in Frankfurt
Credit to Common Sense

Jubilee is Counted in Israel for First Time in 2,000 Years

“And ye shall hallow the fiftieth year, and proclaim liberty throughout all the land unto all the inhabitants thereof: it shall be a Jubilee unto you.” Leviticus 25:10 (The Israel Bible™)

Fireworks seen over the Temple Mount and the Old City of Jerusalem. (Nati Shohat/Flash90)


Amidst the shofar blasts, this Rosh Hashana will include a mitzvah (Biblical commandment) that hasn’t been performed by the Jews in almost 2,000 years: counting the Jubilee. It is a simple mitzvah, reciting just a few lines, but performing this mitzvah is a declaration that the prophesied return of the Jews to Israel has been fulfilled, thereby establishing a basis for the rebuilding of the Jewish Temple.

Unbeknownst to all but a few witnesses, as Rosh Hashana ended eleven months ago, the nascent Sanhedrin concluded months of deliberation by ruling that certain conditions had been met requiring the Nation of Israel to begin counting the Jubilee cycle. Rabbi Avraham Dov Ben Shor recited the blessing and the 49-year cycle began again.

When Rosh Hashana – the Jewish New Year – ends next Tuesday evening, it will be time for Jews to count the second year of the Jubilee cycle. The blessing and the count are as follows:

Blessed art thou, Ruler of the Universe, who sanctifies us in his commandments, and has commanded us to count the sabbaticals and the Jubilees.

Specific conditions outlined in Jewish law had to be considered by the Sanhedrin before reinstating this mitzvah. Unlike most Torah commandments being observed today which are incumbent on an individual, the Jubilee is a national mitzvah. Its observance is dependant upon most of Israel being in the land of Israel.

To begin counting the Jubilee last year, the Sanhedrin, as a bet din (rabbinic court), ruled that the Jews have returned to inherit the land as a nation, and not just as individuals. This requires at least 600,000 Jews, equal to the number of Israelites that returned to Israel from Egypt under Joshua.

Rabbi Hillel Weiss, spokesman for the Sanhedrin, explained to Breaking Israel News, “The Sanhedrin ruled that we are now clearly in the prophesied third inheritance of the land, the first being by Joshua, the second after the Babylonian exile.


“There are 5 mitzvot connected to the Jubilee: counting the Jubilee, letting free slaves, returning land, blowing the shofar, and forgiving debts,” Rabbi Weiss explained. “We have reinstituted one: the counting of the Jubilee.”

Rabbi Weiss added that blowing the shofar, performed on Yom Kippur, has not yet been reinstituted as part of the mitzvah of Jubilee, but if an individual feels so inclined, he can do so without a blessing.

It has been exactly one complete Jubilee cycle since the Six-Day War and the unification of Jerusalem. Had the Jubilee cycle not been interrupted 2,000 years ago by the Diaspora, the first year of the ongoing Jubilee cycle would have been in 1967, the year Jerusalem was unified, and again last year, when the Sanhedrin reinstituted the Jubilee. The next Jubilee will be declared in 2065, 48 years from now.

The jubilee medallion issued by the nascent Sanhedrin. (Courtesy)

To signify the reinstitution of the Jubilee, and also to commemorate the Jubilee of Jerusalem, the Sanhedrin has issued a medallion. One side is engraved with an image of Solomon’s Temple, flanked by two shofars, symbolizing the Jubilee. The other side shows a lit seven-branched menorah, two cherubim, and a Hebrew inscription stating that the third inheritance of the land of Israel by the Jews has officially been declared. The Sanhedrin is selling the medallion and setting aside the proceeds for use in the Third Temple.

“Sale of this medallion will serve as the basis for the mitzvah of the half-shekel, which was collected from every Jewish male,” Rabbi Hillel Weiss explained. “As such, the money will go towards acquiring animals, grain, oil and wine, for sacrificial purposes. It will also be used for building and maintaining the temple.”

The rabbi specified that the medallion does not fulfill the requirements outlined in the Torah for the half-shekel, and should not be considered sacred, but all of the funds will be reserved by the Sanhedrin for Temple use. 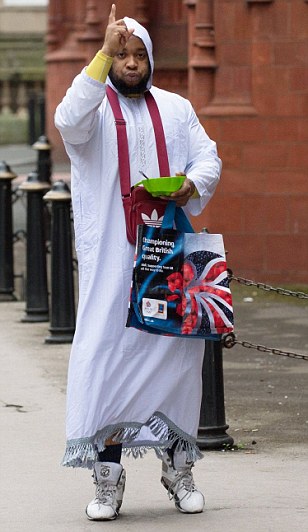 An Islamic street preacher found guilty of abusing a woman in the street over her skinny jeans today insisted he was 'innocent' as he avoided jail.

Unemployed Krissoni Henderson, 31, was convicted of religiously aggravated threatening behaviour after he confronted Noor Alneaimi in Birmingham's New Street on July 4 this year.

He has now been handed a community order and told to pay a total of £710 in costs after being sentenced at Birmingham Magistrates Court.

But Henderson claimed he and his wife, Danielle, were completely 'innocent victims' and vowed to appeal the sentence.

The city's magistrates court was yesterday shown a video which showed Henderson shouting 'You're all terrorists' and 'the Queen of England is a terrorist' as he was led away by police.

Henderson accosted his Muslim victim over her jeans before calling her a slut and saying he would blow up her house.

When she said she would report him, he told her: 'They can't do nothing. I am going to come down your house and blow up you and your house.'

'Then he started hurling abuse at me. He said: 'Look at your tight jeans. You are a kafir'. I was dressed in Western clothes so I don't think he thought I was a Muslim.


Credit to dailymail.co.uk
Read more: http://www.dailymail.co.uk/news/article-3809605/Islamic-street-preacher-abused-woman-street-wearing-skinny-jeans-called-Queen-terrorist-sentenced-today.html#ixzz4LVQJADR4
Posted by Unknown at 8:00 AM No comments: Links to this post

The Pentagon chief put Russia on par with North Korea when he spoke about threats faced by the US and its allies, and the need to invest billions into refreshing NATO’s nuclear playbook to integrate conventional and unconventional deterrence methods.

Addressing US servicemen, missile units and B-52 crews at Minot Base, Defense Secretary Ash Carter stated that the US and its allies had not built any new nuclear weapons or delivery systems in the last 25 years – and said that American nuclear forces must be ready to engage in a possible nuclear confrontation with Russia.

“Russia has long been a nuclear power, but Moscow’s recent saber-rattling and building of new nuclear weapons systems raises serious questions about its leaders’ commitment to strategic stability, their regard for long-established accords of using nuclear weapons and whether they respect the profound caution that Cold War era leaders showed in respect to brandishing their nuclear weapons,” the Pentagon chief claimed.

Brushing aside the fact that so far the US remains the only country that has ever used nuclear weapons against another state, Carter said that a “diverse and dynamic spectrum” of nuclear threats in the world could prompt some nations to use these weapons on a smaller scale.

“It is a sobering fact that the most likely use of nuclear weapons today is not the massive ‘nuclear exchange’ of the classic Cold War-type, but rather the unwise resorting to smaller but still unprecedentedly terrible attacks, for example by Russia or North Korea,” he said. “We cannot allow that to happen, which is why we’re working with our allies in both regions to innovate and operate in new ways that sustain deterrence and continue to preserve strategic stability.”

To counter the perceived Russian threat, Carter stressed that the US and its NATO allies in Europe are “refreshing” its nuclear playbook to integrate conventional and nuclear deterrence “to ensure we plan and train like we’d fight” and to “deter Russia from thinking it can benefit from nuclear use in a conflict with NATO.”

In addition to tensions with Russia, Carter referred to the North Korean threat a few times during his speech, implying that Washington must be ready to support its allies in Asia in face of continued Pyongyang’s disobedience to UN Security Council resolutions and ongoing nuclear and delivery methods tests.

“The confidence that you’re ready to respond is what stops potential adversaries from using nuclear weapons against the United States or our allies in the first place,” he said, adding that the Pentagon plans to invest $108 billion over the next five years to sustain and improve its nuclear force.

The investment is aimed at modernizing the nuclear triad of the US strategic posture which includes land-based ICBMs, nuclear bombers, and submarine-launched atomic missiles. According to the Congressional Budget Office, the US could spend up to $348 billion through 2024 modernizing every component of the US nuclear triad.

At present US nuclear weapons can be delivered for a strike on potential targets using 20-year-old B-2 stealth bombers or 50-year-old B-52 strategic bombers. From sea missiles could be deployed from a 35-year-old Ohio-class nuclear submarines. Meanwhile, silo-launched Minuteman III ballistic missiles are in service since 1970s.

“If we don’t replace these systems, quite simply they will age even more, and become unsafe, unreliable, and ineffective. The fact is, most of our nuclear weapon delivery systems have already been extended decades beyond their original expected service lives,” Carter said.

“Deterrence still depends on perception,” Carter added. “What potential adversaries see, and therefore believe, about our ability to act.”

Germany Told Their People To Prepare, Was This For The Economic Collapse?