A few years back, we were stunned when we reported that as a result of McDonalds' first hiring day in 2011, the company retained the services of 62,000 very qualified line cooks and other minimum wage workers.

What was stunning is that one million Americans applied for these jobs, or a 6.2% success rate, or just a fraction above the 5.8% admission rate at Harvard. Alas, as we speculated at the time, this was merely the first of many such indications of the historic mismatch between labor supply and demand, both domestically and globally.

Sure enough, today we find an even more glaring example of just how unprecedented the New Normal demand for labor is in a world drowning with unemployment, courtesy of an NPR report according to which on Monday, Spain's Ikea's started taking applications for 400 jobs at a new megastore set to be opened near the Mediterranean coast town of Valencia.


It gets better, as Spain experienced its own mini Obamacare debacle: the sheer volume of applicants promptly "crashed Ikea's computer servers in Spain."
"We had an avalanche of applicants!" Ikea spokesman Rodrigo Sanchez told NPR in a phone interview. "With that quantity, our servers just didn't have the capacity. They collapsed. After 48 hours, we had to temporarily close the job application process. We're working on a solution, to reopen the as soon as possible."

And since the analogies to Obamacare never end, one has no idea how many additional applicants would have tried to get a job had the servers continued to run:

... that's factoring in only the applicants in the first 48 hours, who managed to apply online before Ikea's servers crashed. Once Ikea gets its servers back up and running, the job application window will still stay open until Dec. 31, allowing potentially tens of thousands more job seekers to file applications, Sanchez said.

"I feel lucky to have a job. Ikea is a great company. In this case we have 20,000 initial people who want to work with us," he said. "But we know we're in this situation at least in part because of the state of the Spanish economy."

Why the deluge of applicants? Simple: Spain's record high unemployment rate of 26.7% is the second highest in the eurozone, matched only by Greece's 27.3%. What's worse: Spain's youth unemployment is also a record high 57.4%: nearly two out of every three people under 25 have no job. But that's ok: according to the Spanish prime minister, Spain's economy is growing and the recovery is so bright everyone's ECB rehypothecated shades will be made available shortly (together with the latest batch of Spiderman towels).

In the meantime, it is three times more difficult to get a minimum wage job at Ikea in Spain than it is to get into Harvard.
Credit to Zero Hedge
Posted by Unknown at 9:00 AM No comments: Links to this post

Pope Francis at Mass: Praying is a bit like “annoying” God 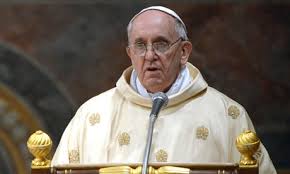 Pope Francis spoke on the theme of prayer on Thursday, saying when we pray it’s a bit like annoying God so that he listens to us. His remarks came during his homily at the morning mass in the Santa Marta guesthouse.


Listen to the following report by Susy Hodges:
Speaking at Mass, Pope Francis said "prayer has two attitudes: it’s needy and at the same time it’s certain of the fact that God, in his own way and his own time, will answer our need." A person who prays, he continued, "doesn’t fear disturbing God and nourishes a blind faith in His love." The Pope recalled how Jesus himself taught us to pray like the annoying friend who begs for food at midnight or like the widow with the corrupt judge. Another example he quoted was the gospel account of how the lepers approached Jesus, saying to him, “if you want, you can cure us.”

“Maybe this sounds strange,” the Pope said, “but praying is a bit like annoying God so that he listens to us. He stressed the importance of praying with insistence and not giving up after the first few attempts. “Jesus said “ask” but he also said to us, “Knock at the door” and he or she who knocks at the door makes a noise, disturbs or annoys.”

Therefore, Pope Francis continued, “prayer is insisting to the point of annoyance but also with an unshakeable certainty.” Just like the blind people in the Gospel who asked Jesus to be healed and when he asked them if they believed he could cure them, they assured him they did. The Pope concluding by saying that Jesus feels our need when we pray and also feels that we are certain of his help and that we’re speaking the truth about ourselves.


Credit to newsva
Posted by Unknown at 8:00 AM No comments: Links to this post

EILAT, Israel – Saudi Arabia is proposing a sweeping deal to Russia that solidifies Moscow’s position in the Middle East and Persian Gulf largely at the expense of the United States, according to informed Egyptian security officials.

The deal incorporates increased Russian involvement in Egypt, Syria and the Persian Gulf, and even involves a Saudi guarantee to aid against terror plots targeting the 2014 Winter Olympics in Sochi, Russia.

The Egyptian officials said the deal seeks to replace the U.S. with Russia as the major weapons dealer to Egypt.

However, the weapons sales to Cairo are only the tip of the potential re-balancing iceberg that follows a major fallout with the Saudis after President Obama’s outreach efforts to Iran.

The Saudis asked for the removal of Syrian President Bashar al-Assad while Riyadh would help establish a permanent central Russian role in the future of Syria, with a military presence in the country, the officials said.

The Saudis offered to help clean out Syria of Islamic extremist elements while working with other countries, including Israel, to ensure the cooperation of the Free Syrian Army and moderate Alawite tribes in a post-Assad era.

According to the Egyptian intelligence officials speaking to WND, Russia immediately rejected the plan for Assad to step down. Still, the Saudis see this rejection as an initial bid by Moscow to negotiate a deal rather than as final rejection.

The Saudis pledged to cut off all back-channel support for Islamic extremists in Chechnya and even promised to ensure against terrorist attacks at the 2014 Olympic games.

Further, the Saudis offered to serve as a bridge between Russia and its former provinces now governed by Islamic parties.

Perhaps most remarkable is that the deal is being brokered by Saudi intelligence chief Prince Bandar bin Sultan, who was once one of the leading proponents of the U.S.-Saudi alliance. Bandar reportedly was in Moscow yesterday for talks with Russian President Vladimir Putin.

The Egyptian officials said Russia is giving serious consideration to the Saudi proposal.

Credit to WNDRead more at http://mobile.wnd.com/2013/12/game-changer-saudis-seek-to-re-balance-mideast-against-u-s/#bHvsdpIRPP35zQGl.99
Posted by Unknown at 7:00 AM No comments: Links to this post