The NOAA National Geophysical Data Center maintains a data set of annual magnetic north pole coordinates going back to the year 1590, derived from early measurements from ships logs to modern day techniques.
Noting that there has been lots of reporting of pole shift lately, to the point where the phenomenon is actually causing real-world issues such as temporary airport closures, a deeper investigation was in order.
After transferring 420 years of north pole position data from the NOAA Geo Data Center, configuring it to fit in an Excel spreadsheet, adding a complicated formula to determine exact distance between 2 sets of latitude-longitude coordinates, applying the formula to each data point in the series, and then finally plotting it all in a visual graph, it is alarming to discover the amount of magnetic pole shift – just over the past 10 to 20 years.


Here is one very interesting fact…
Since 1860, the magnetic pole shift has more than doubled every 50 years. That is pretty significant. In geological terms, that seems to be pretty ‘rapid’.
Here is another very interesting fact…
During the past 150 years, the pole shift has been in the same direction.
The following fact is even more astonishing…
During the past 10 years, the magnetic north pole has shifted nearly half of the total distance of the past 50 years! In other words, the pole shift has apparently sped up substantially.

The present rate of magnetic north pole shift is about 55 kilometers per year. According to the data set, during the year 2000 the magnetic north pole actually shifted more than 70 kilometers.
The issue now is, since the pole shift has been at 400 year record high rates during the past 10 to 20 years, the cumulative effect is now beginning to cause real-world issues.
Will the effects affect us noticeably or in a bad way? Time will tell I suppose, but at the current rate there will no doubt be direct effects on many systems in the years ahead, many of them nuisance issues such as documentation changes while others will likely be more serious.
It is not known if the shift will speed up or slow down in the years ahead. Some say that a pole reversal is overdue, and this phenomenon may be indicators of the beginnings of that process.
Note that the earth’s magnetic field is what protects us from radiation. Without it, we would not survive. Could a pole reversal cause a period of time in-between flip-flop such that we would be exposed to deadly radiation? Stay tuned…

At the current direction, the magnetic north pole is heading directly towards Russia. The following image shows the dramatic acceleration while pointing out the past 50 years versus the past 10 years of movement.

While the speed of the earth’s magnetic north pole shift has drastically sped up lately to about 34 miles per year (55 km), let’s look at what is happening with the south magnetic pole.
Every magnetic field has two polarities, North and South for example, and one might think that whatever is happening with one pole would be happening (in the inverse?) to it’s opposite pole.
Well as it appears, the earth’s magnetic south pole is not behaving similarly to it’s opposite north pole. In fact, it’s drift, or pole shift, is actually slowing down! Presently it’s only moving 3 miles (5 km) per year, only a tenth the speed of the north!
(Pole coordinate data sourced from NOAA’s National Geophysical Data Center)
http://www.ngdc.noaa.gov/geomag/GeomagneticPoles.shtml
http://www.ngdc.noaa.gov/geomag/data/poles/NP.xy
http://www.ngdc.noaa.gov/geomag/data/poles/SP.xy
Not only that, but it is interesting to note that both the north and south magnetic poles are favoring one side of the earth – the south pole is heavily favoring one side, and continues to move further away from true south.
The south magnetic pole is actually 1,800 miles (2,900 km) away from the earth’s true south pole! That is a substantial offset.
The north magnetic pole is fairly near true north and is ‘only’ about 360 miles (580 km) away. 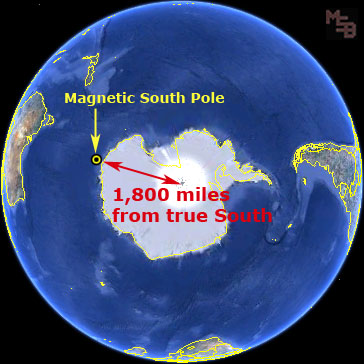 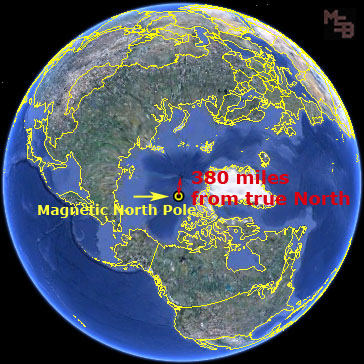 When the earth is visualized with its magnetic poles more offset and favored towards one side of the planet than the other (which it has been for some time – although the south magnetic pole is moving even further to the favored side), coupled with the large variance in shift speed between the north and south, explanations may seem bizarre.
Since we know that the earth’s magnetic field is generated from the spinning liquid molten iron Outer Core (encapsulating a solid iron Inner Core), is one part of the Outer core churning differently than the other?
Could the Outer Core, or part of it, be offset somehow, causing the magnetic pole axis to pass through one side of the planet more than the other? Wouldn’t that cause the planet to wobble?
Is the iron consistency changing in one part of the Outer Core more than the other?
If the Outer Core is ‘centered’ with the rest of the earth, and the molten iron composition is considered to be relatively consistent, do these observations indicate that the magnetic axis is actually bending or warping as it passes through the planet?

These are all interesting things to think about (for some of us), and while being just a logical minded casual observer, there is no doubt that these earth changes are powerful ones – even if only occurring relative to the time frame of the planets life.
Take a look at the following graph and see the extreme difference in North versus South Pole Shift speed since about 1930. As they say, a picture’s worth a thousand words…
Something’s happening up north…

Observe the magnetic pole axis tilt, and the fairly precise indication to the part of the planet that is favored more-so by proximity to the magnetic axis.
Could crustal movements, earthquakes and volcanoes be affected differently on this side of the planet than the other? The location is certainly right on top of the pacific ring of fire, and very near the general vicinity of Indonesia (most active volcanoes in the world), and located in the part of the world that gets the majority of earthquakes. It could purely coincidental, but who’s to say… 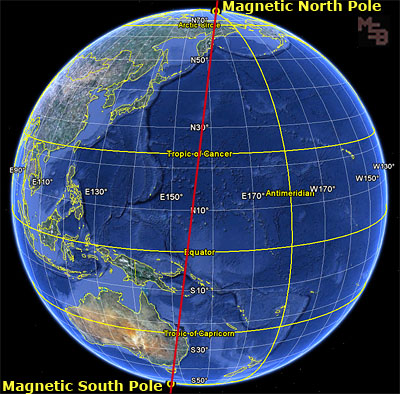 hostgator coupon 2011
Posted by Unknown at 7:00 AM No comments: Links to this post