'Arabs will protest like Egypt over social workers' strike'


Welfare agencies are set to close Sunday. Social workers protesting their employment terms and claiming that enough is enough will launch a strike as price hikes abound and the economic burden increases. But in the Arab sector there is an additional concern – fears of protests over racial discrimination.


"The government needs to wake up before it's too late and the Arab population organizes protests against the government," the manager of the seniors' department in the Kafr Kana council and Social Workers' Association Committee Member Naail Beto stated. "If there is no response to the demands of the Arab population, we will see thousands of people in the streets protesting against the Israeli government, similar to protests in Egypt, Libya and Tunisia.

Beto warned that the social workers' strike would only exacerbate the problem. "These distressed families won't be receiving any services and it will make them consider mutinous behavior and protests," he explained, "We will only be handling emergency cases through the exceptions committee so it is best if solutions are discussed before a blowup occurs.

Saudi Arabia has watched revolts unfold in Tunisia, Egypt andLibya. When it comes to Bahrain, the world’s largest oil exporter may not be a mere spectator.
Protests on the neighboring island, where the U.S. Navy’s Fifth Fleet guards Gulf oil supply, are being overshadowed by the challenge to Libya’s Muammar Qaddafi. Yet they underscore the sectarian divide in the Muslim world between Shiites and Sunnis that puts Iran on one side and Saudi Arabia on the other in a region that holds about 55 percent of the world’s crude.
“Saudi Arabia is concerned about the expansion of the Shiite crescent,” said Theodore Karasik, director of research at the Dubai-based Institute for Near East and Gulf Military Analysis. “The last thing Riyadh would want to see is Shiite rule inBahrain. At the end of the day, Saudi Arabia would intervene militarily.”
Instability in Bahrain might affect oil prices more than the ouster of Tunisia’s Zine El Abidine Ben Ali in January, Egypt’sHosni Mubarak a month later or the turmoil in Libya, according to Mustafa Alani, a regional security expert from the Dubai-based Gulf Research Center.
Mainly Shiite protesters in Bahrain are demanding democracy through free elections from their Sunni monarch. Thousands of demonstrators surrounded the state television headquarters in the capital, Manama, today, shouting slogans against the royal family, after several Shiites were injured in street clashes with Sunnis late yesterday, the Associated Press reported.

“Bahrain is the front line in the conflict between the Gulf states and Iran,” Alani said in a telephone interview. “The sectarian dimension is definite. This would have a huge impact on the stability in the Gulf.”
There have already been signs of unrest among Saudi Shiites, who make up about 10 to 15 percent of the population. About 100 people joined a demonstration in the Shiite village of Awwamiya yesterday, calling for the release of prisoners, and a similar number gathered later in the city of Qatif under a strong police presence.
Saudi Arabia, which holds 20 percent of the world’s oil reserves, is dominated by a branch of Sunni Islam, while Iran, home to 10 percent of reserves, is mainly Shiite.
Crude oil prices have climbed 20 percent to a 29-month high since unrest erupted in Bahrain on Feb. 14. Saudi Arabia’s benchmark stock index plunged the most in more than two years on March 1 on concern disturbances may extend to the kingdom. The Tadawul All Share Index (SASEIDX) has tumbled 20 percent since Feb 14
Bloomberg
MORE:
http://www.bloomberg.com/news/2011-03-04/bahrain-may-be-uprising-too-far-for-saudis-avoiding-iran-s-grip.html

One dead as Muslims, Christians clash in Cairo 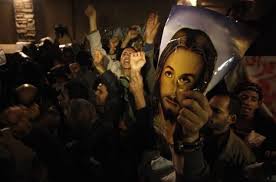 Reuters) - One Christian youth was shot dead Tuesday during a protest between 1,300 Christians and Muslims who were throwing stones and Molotov cocktails at each other, a security source said.


The fighting erupted when a group of Christians blocked a main highway south of Cairo and clashed with Muslims who wanted to pass through, a security source said.


Christians were protesting for the second day over a church in Helwan on the outskirts of the capital that was set on fire Sunday after a row sparked by a relationship between a Christian man and a Muslim woman, witnesses and a security source said.


The army fired gunshots in the air to break up the riot but was unable to quell the fight straight away, witnesses said. An army statement said it "successfully handled riots Tuesday."


One 18-year old Christian was killed by a bullet that struck him in the back but it was unclear who had fired the shot or whether it had been aimed intentionally, the security source said. Some witnesses said they saw protesters carrying weapons.


"They (the Christians and the Muslims) began fighting because people in their cars wanted to pass through and the protesters had blocked the highway,"


About 20 people were injured and five cars were burned during in the latest sectarian flare-up.


In downtown Cairo hundreds of Christian protesters, carrying wooden crosses and some wearing glow-in-the-dark crucifixes brought another major highway to a halt.


There have been previous flashpoints between Muslims and Christians, who make up about 10 percent of the 80 million population.

Spurting fire: The large solar flare that swirled and twisted for 90 minutes This amazing image captures the sun at its most beautiful... and violent.
It shows a large solar flare - or prominence - blowing out a dazzling, waving mass of erupting plasma that swirled and twisted for 90 minutes.

The world got a taster of the sun's explosive power last month when the strongest solar eruption in five years sent a torrent of charged plasma hurtling towards the world at 580 miles per second.
The storm created spectacular aurorae and disrupted radio communications.
The X-class flare was one of three solar flares emitted in a week week. Read more: http://www.dailymail.co.uk/sciencetech/article-1362159/The-large-solar-flare-swirled-twisted-90-minutes.html#ixzz1Fa4gEeYE
hostgator coupon 2011
Posted by Unknown at 7:00 AM No comments:

Mervyn King, the Governor of the Bank of England, has come under fire from leading economists after warning that Britain risks suffering another financial crisis without reform of the country’s banks.


Mervyn King said that “imbalances” in the banking system remain and are “beginning to grow again”.
But leading economists, including a former Tory advisor and the chief executive of the British Bankers' Association, have criticised his comments.
Tim Congdon, who served on the Treasury Panel of Independent Forecasters (the so-called "wise men") under the last Conservative government, called the remarks "unjustified".
He said: "The truth is the financial sector is very important to the British economy. He's been at the Bank of England for twenty years... I find it incredible that he's now attacking the structure of the industry.
"If you criticise the banks you reduce their credibility and then people worry about them. The important thing for the Governor of the Bank of England is to help them."

Angela Knight, chief executive, British Bankers' Association, said: "We view the Governor with the highest respect, but in this instance there are a number of points with which we disagree.
"The banking industry recognises that some of its number got it badly wrong during the crisis. Since then the industry has reformed radically.
"We work closely with our customers of all sizes and types and in doing so have created one of the largest financial centres in the world and a great contributor to the British economy. We achieved this together by doing our business well - not by doing it badly.
"We entirely agree that no bank should believe it can fall back on the taxpayer. The changes from top to bottom within the industry have ensured the risks are well controlled, and all banks have put recovery and resolution plans in place to answer the too-big-to-fail question and so safeguard customers and the taxpayer against the remote consequences of any future failure."
The Telegraph
MORE:
http://www.telegraph.co.uk/finance/economics/8363320/Bank-of-England-chief-under-fire-after-warning-Britain-is-at-risk-of-another-financial-crisis.html