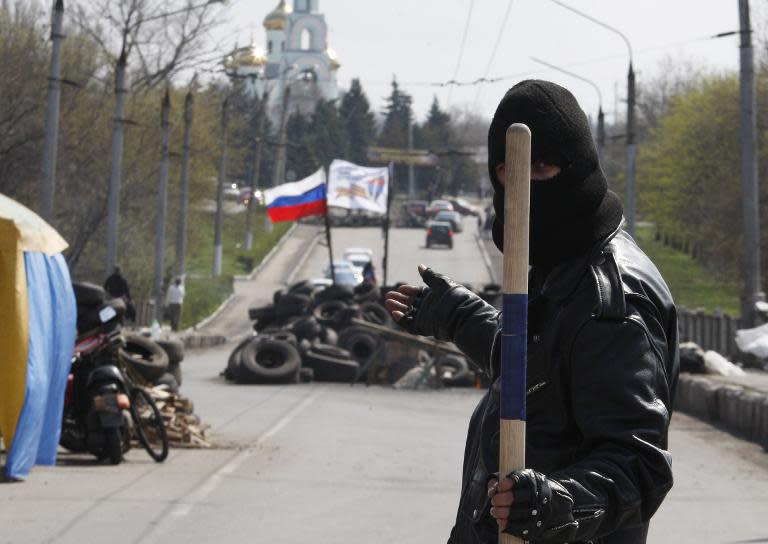 Presidents Barack Obama and Vladimir Putin confronted one another in telephone talks Monday as a standoff over Ukraine escalated after the CIA chief visited Kiev and a Russian war plane "buzzed" a US destroyer.

Washington said it was consulting European allies and hinted that more sanctions on Russia's economy could be coming, to punish what it sees as Moscow's sponsorship of pro-Russia violence in eastern Ukraine.

The Kremlin said that Putin used the latest in a string of tense phone calls with Obama to brand US charges of meddling in eastern Ukraine as "unfounded."

There were no immediate readouts of the call from the White House, which earlier was the first to say it would take place.

Unusually though, the White House did offer some details of CIA chief John Brennan's travel, confirming Russian media reports that the top US spy had flown into Kiev over the weekend.

But White House spokesman Jay Carney blasted claims that Brennan's travel was anything but routine -- and said he was revealing it to rebut "false claims" laid by Russia.

"Senior-level visits of intelligence officials are a standard means of fostering mutually beneficial security cooperation, including US-Russian intelligence collaboration going back to the beginnings of the post-Cold War era," he said.

"To imply that US officials meeting with their counterparts (in Kiev) is anything other than in the same spirit is absurd."

Carney also denied that a new Cold War was brewing between Russia and the United States, but an incident involving a Russian jet over the Black Sea and a US cruise missile destroyer did hark back to the tensions of that earlier era.

The Pentagon said the Su-24 fighter made several low-altitude, high-speed passes near the USS Donald Cook, cruising in international waters off Romania over the weekend.

Credit to yahooNews
Posted by Unknown at 6:00 AM