The Islamic State ‘executes 150 women for refusing to marry jihadists’ 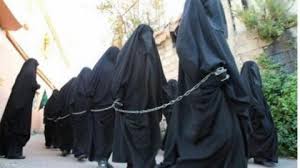 This is all according to Islamic law (sharia). Muslim men can take “captives of the right hand” (Qur’an 4:3, 4:24, 33:50). The Qur’an says: “O Prophet! Lo! We have made lawful unto thee thy wives unto whom thou hast paid their dowries, and those whom thy right hand possesseth of those whom Allah hath given thee as spoils of war” (33:50). 4:3 and 4:24 extend this privilege to Muslim men in general. (Source: Robert Spencer)
“Prosperous are the believers who in their prayers are humble and from idle talk turn away
and at almsgiving are active and guard their private parts save from their wives and what their right hands own then being not blameworthy.” (Quran 23:1-6)
Those whom their “right hands own” (Quran 4:3, 4:24, 33:50) are slaves, and inextricable from the concept of Islamic slavery as a whole is the concept of sex slavery, which is rootedin Islam’s devaluation of the lives of non-Muslims. The Quran stipulates that a man may take four wives as well as hold slave girls as sex slaves. These women are captured in wartime and are considered the spoils of war. Islam avoids the appearance of impropriety, declaring that the taking of these sex slaves does not constitute adultery if the women are already married, for their marriages are ended at the moment of their capture. A manual of Islamic law directs: “When a child or a woman is taken captive, they become slaves by the fact of capture, and the woman’s previous marriage is immediately annulled” (Reliance of the Traveller, o9.13). Source: Robert Spencer
Islamic State jihadists have given detailed theological reasons justifying why they havetaken thousands of women from the Iraqi Yazidi minority and sold them into sex slavery.
An article in the Islamic State English-language online magazine Dabiq not only admits the practice but justifies it according to the theological rulings of early Islam.

Jihadis from the Islamic State group pray at the Tabqa air base after capturing it from the Syrian government in Raqqa, Syria

Isis ‘executes 150 women for refusing to marry militants’ and buries them in mass graves,” By Heather Saul, The Independent, December 17,2014 (thanks to Lookmann)
has executed at least 150 women for refusing to marry militants in Iraq,Turkish media has reported.
A statement released by Iraq’s Ministry of Human Rights on Tuesday said the militants had attacked women in the western Iraqi province of Al-Anbar before burying them in mass graves in Fallujah.
Some of the women killed were pregnant at the time, according to the Anadolu Agency.
“At least 150 females, including pregnant women, were executed in Fallujah by a militant named Abu Anas Al-Libi after they refused to accept jihad marriage,” the statement said.
“Many families were also forced to migrate from the province’s northerntown of Al-Wafa after hundreds of residents received death threats.”
Isis has overrun a large part of the western Anbar province in its push to expand its territory across swathes of Iraq and Syria.
The Independent is attempting to verify the reports.
The executions come after the militant group shot dead at least 50 men, women and children in a tribe massacre in the province last month.
The attack against the Al Bu Nimr tribe took place in the village of Ras al-Maa, north of Ramadi, the provincial capital. There, the militant group killed at least 40 men, six women and four children.
A senior tribesman said they were lined up and publicly killed one by one. An official within the Anbar governor’s office corroborated the tribesman’s account, according to The Associated Press.
Read more: Isis ‘price-list’ for captured Yazidi girls
Isis declares new currency will be circulated
Isis guides on how to be the ‘ultimate wives of jihad’
Isis also recently published what appeared to be an “abhorrent” pamphlet providing its followers with guidelines on how to capture, keep and sexually abuse female slaves.

Credit to dcclothesline.com
Posted by Unknown at 7:00 AM