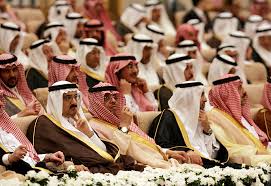 When Saudi Arabia and OPEC became the paymasters for the American Empire, the Arabs were fairly unsophisticated in the game of world power. That has changed.

Now, the sheikhs are better at handling the leash and the lash, which is why it is easier to see Arab machinations behind the wars in the Middle East. There’s also another problem.
The profit margins for the Saudi sheikhs have exploded, and that has given them even more power. Unfortunately, with great power comes the opportunity to miscalculate and destroy everything – and, that’s why we are being led by the nose to nuclear war.
Those Saudis are no great sheikhs.
(sorry, I couldn’t resist!)