The unemployment crisis in America is much worse than you are being told.  Did you know that there are 100 million working age Americans that do not get up in the morning and go to work?  No wonder why it seems like there are so many people that do not have jobs!  According to the federal government, there are 12.6 million working age Americans that are considered to be "officially" unemployed, but there are another 87.8 million working age Americans that are not working either.  The federal government considers those Americans to be "not in the labor force" so they are not included in the unemployment rate.  In fact, this is one of the key ways that the government manipulates the unemployment numbers.  The Obama administration would have us believe that the unemployment rate is going down and that that since the start of the last recession about as many Americans have left the labor force as we saw during the entire decades of the 1980s and 1990s combined.  Of course that is a bunch of nonsense, but that is what the Obama administration would have us believe.  The truth is that the percentage of working age Americans that are employed is just about the same right now as it was two years ago.  It was incredibly difficult to get a job back then and it is incredibly difficult to get a job right now.  So don't believe the hype that things are getting much better.  If you still do have a good job, you might want to hold on to it tightly, because there is not much hope that things are going to improve significantly any time soon.


The first chart that I have posted below shows the total number of "officially" unemployed workers in America.  According to the Federal Reserve, that number is currently 12,673,000.  This chart makes it look like the employment picture in America is getting significantly better.... 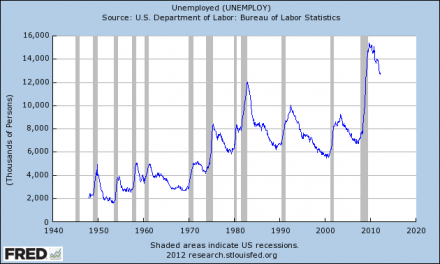 But if you dig deeper into the numbers you quickly see that this is not true.  A lot of those workers that were formerly classified as "unemployed" have now been moved into the "not in labor force" category.  Since the start of the last recession, the number of Americans not in the labor force has risen by more than 8 million according to the Obama administration.  The total number of working age Americans not in the labor force now stands at 87,897,000.... 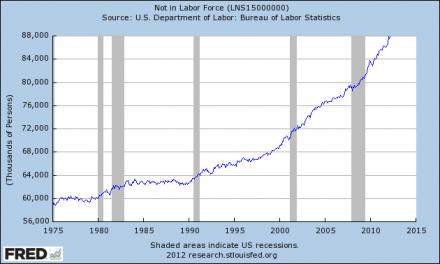 About six million people claim they want a job, even though they haven't looked for one in the last four weeks. If they were to all start applying for work again, the unemployment rate would suddenly shoot up above 11%.

If you want a much more accurate picture of what is really happening to the employment situation in America, the key is to look at the employment to population ratio.  As I have written about previously, the percentage of working age Americans that have jobs is not increasing.
Let's take a look at the employment to population ratio for the last six years for the month of March....
March 2007: 63.3%
March 2008: 62.7%
March 2009: 59.9%
March 2010: 58.5%
March 2011: 58.5%
March 2012: 58.5%
The percentage of the working age population that had jobs fell rapidly during the recession and it has stayed very low since then.
When Barack Obama tells you that "America is going back to work" he is lying to you.
The cold, hard reality of the matter is that there are millions of hard working Americans that have been sitting at home for years hoping that a new job will come along.
Back in 2007, approximately 10 percent of all unemployed Americans had been out of work for one year or longer.
Today, that figure is above 30 percent.
The average duration of unemployment in the United States today is about three times as long as it was back in the year 2000.
And according to a recent Wall Street Journal article, the number of announced job cuts is actually rising again....

Also, announced jobs cuts rose 7.1% in April, according to Challenger, Gray & Christmas, to 40,599 — and up 11.2% from last April — another bit of evidence that the jobs market isn’t doing well.

Economic conditions in the United States have been steadily getting worse for quite a while, but that is not the only reason for our employment problems.
There are two other trends that I want to briefly mention.
1) A lot of jobs that used to be very labor intensive are now being replaced by technology.  Thanks to robotics, automation and computers, a lot of big companies simply do not need as many workers these days.  Those are jobs that are never going to come back.
2) As labor has become a global commodity, millions upon millions of U.S. jobs have been sent overseas.  Today, you are not just competing for a job with your neighbors.  You are also competing with workers on the other side of the globe.  Unfortunately, it is legal to pay slave labor wages in many of those countries.  By sending our jobs out of the country, big corporations can also avoid a whole host of rules, regulations, taxes and benefit payments that they would be facing if they hired American workers.
So U.S. workers are at a massive competitive disadvantage.  Why should a big corporation pay 10 or 20 times more for an American worker when they can pad their profits by exploiting cheap foreign labor?
The sad truth is that the value that the marketplace puts on the labor of the average American worker is continually decreasing.
This is making it much more difficult to find a job and it is keeping wages down.
In the old days, pretty much any man that was a hard worker and that really wanted a good job could go out and get one.
But now all of that has changed.  Back in 1950, more than 80 percent of all men in the United States had jobs.  Today, less than 65 percent of all men in the United States have jobs.
And sadly, the vast majority of the jobs that are being lost are good jobs.  As I wrote about the other day, 95 percent of the jobs lost during the recession were middle class jobs.
So how are middle class families making it these days?
Many of them are going into tremendous amounts of debt.  As a recent CNN article detailed, the average debt load being carried by those of us in the bottom 95 percent of all income earners has risen dramatically over the past several decades....

In 1983, the bottom 95% had 62 cents of debt for every dollar they earned, according to research by two International Monetary Fund economists. But by 2007, the ratio had soared to $1.48 of debt for every $1 in earnings.

Unfortunately, many American families are absolutely maxed out at this point.  According to one recent survey, approximately one-third of all Americans are currently paying their bills late.
If your goal is to live a middle class lifestyle, you need to realize that the entire way that the game is being played is changing.
In the old days, you could start out with a company as a young person and stay with that company until you retired.  If you worked hard and you were loyal, there was a really good chance that the company would recognize that and be loyal to you too.
These days, most companies are absolutely heartless when it comes to their workers.  The good job that you have today could be gone tomorrow.  Workers are increasingly being viewed as "liabilities", and there is a good chance that the moment you become "expendable" to your company you will be kicked out on the street.
That is one reason why I am encouraging people to consider starting their own businesses.  If you work for someone else, your security can be taken away from you at any moment.  But if you work for yourself, you aren't going to get fired.
Unfortunately, tough economic times are coming and things are not going to be easy no matter what road you take.  It will be imperative to work harder than ever, to stay flexible, and to never, ever give up.
Economic Collapse
Posted by Unknown at 6:00 PM