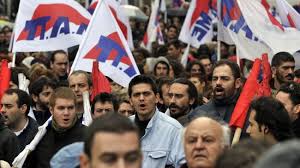 The agreement between Greek politicians was initially heralded as the breakthrough to unlock a €130bn (£109bn) international bail-out package to avoid Greek bankruptcy.

However, the chairman of a meeting of the 17 eurozone finance ministers last night said fresh conditions will have to be met before the bail-out is endorsed.

Jean-Claude Juncker, head of the eurogroup, said an extra €325m (£273m) in savings for 2012 will be needed. The Greek parliament will also have to agree the deal on Sunday and politicians will have to promise to stick with the package after elections in May.

“We did not yet have all necessary elements on the table to take decisions today,” Mr Juncker, the Luxembourg prime minister, said. “In short: no disbursement before implementation.”

The European finance ministers will meet again next Wednesday if the conditions are met, he added.

Greece needs international help to repay a €14.5bn bond due on March 20.

Evangelos Venizelos, the Greek finance minister, said earlier in the day: "After a long and fraught period of negotiations we have finally a staff level agreement with the troika for a new strong and credible programme."

He added that Greece had agreed on the "basic parameters" of a deal with its private creditors in what could be the biggest ever sovereign bond restructuring. "We need now the political endorsement of the eurogroup for the final step," he said.

The deal which includes a raft of spending cuts, pension reforms and public sector job losses, was agreed between Greece's coalition partners and the troika - members of the European Union (EU), the European Central Bank (ECB) and the International Monetary Fund (IMF).

It faces an even tougher hurdle to get passed in the Greek parliament on Sunday. The dominant Pasok party has seen its electoral support plunge from a powerful 47pc to just 8pc, according to a recent poll.

Greece is braced for 48-hour strike starting on Friday as trade unions denounced the debt deal as the "tombstone of Greek society".

The Hellenic Statistical Authority announced that Greece's manufacturing output contracted by 15.5pc in December from a year earlier and industrial output fell 11.3pc, having fallen 7.8pc in November.

Unemployment jumped to 20.9pc in November, up from 18.2pc in October - a rise of 14pc in a month. Greece's youth unemployment has reached 48pc - surging past Spain's for the first time.

Mario Draghi, the boss of the ECB, added to fears when he rejected that reports that the central bank would step in to ease Greece's burdens through a complicated debt swap. He said the view that the ECB would take losses on Greek bonds was "unfounded."

But, confirming that Lucas Papademos, the Greek prime minister, had called to say a deal had been reached, he said he was "quite confident that all the pieces would fall in the proper places" concerning the rescue package for Athens.

At a press conference where he announced interest rates would stay at 1pc, Mr Draghi said that "frankly" the ECB's governing council "didn't discuss any prospective or current change in interest rates."

He added that the economic outlook was subject to risks that "notably relate to tensions in euro area debt markets and their potential spillover to the euro area real economy."

The Telegraph
Posted by Unknown at 10:00 AM