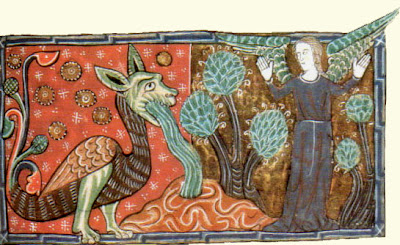 Revelation 12:15
And the serpent poured water like a river out of his mouth after the woman, so that he might cause her to be swept away with the flood.

The book of Revelation conveys truth through symbolism. The serpent is symbolic of Satan. He is also called the dragon, which is a type of winged serpent.

Revelation 12:9
And the great dragon was thrown down, the serpent of old who is called the devil and Satan, who deceives the whole world...

The apostle Paul refers to Satan as “the prince of the power of the air.” His power is in deception. What is being symbolized in Revelation is Satan deceiving the world through a mass of lies. He is using words and various images and forms of communication to deceive the world. He would even sweep away the people of God with his lies, but God will help those who are fleeing from the great dragon.

Perhaps those who read this blog have taken note of the fact that the Chinese New Year began on January 23rd at midnight. The Chinese associate each year with one of twelve different animals. All of the animals are real except for one that is mythical, this being the dragon. In order they are:

The Chinese further combine these animals with five different elements which are wood, fire, earth, metal, and water. It takes 60 years for the complete cycle to be fulfilled.

The year 2012 in the Chinese calendar is the Year of the (Male Water) Dragon. It began on January 23, 2012 and will end on February 9, 2013. According to traditional texts, some form of the calendar has been in use for almost five millennia... The Chinese year beginning January 23, 2012 is reckoned in the seldom-used continuously numbered system to be 4709...
[Source: http://en.wikipedia.org/wiki/Chinese_calendar] 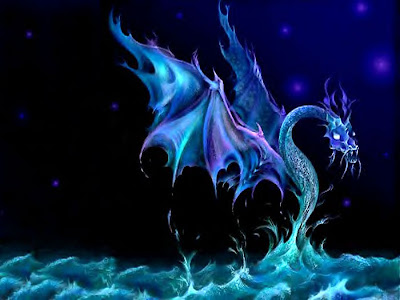 According to the Chinese calendar, it is the year 4709. The numbers appear significant. In the Bible we find that these numbers hold the following symbolic meanings.

When most people think of dragons, they think of those that breathe fire. The Bible does make reference to such a beast. In the book of Job Yahweh gives a description of the creature called Leviathan.

Job 41:18-21
His sneezes flash forth light, and his eyes are like the eyelids of the morning. Out of his mouth go burning torches; Sparks of fire leap forth. Out of his nostrils smoke goes forth as from a boiling pot and burning rushes. His breath kindles coals, and a flame goes forth from his mouth.

It is not a fire breathing dragon, however, that is depicted in Revelation chapter 12. What is described is a water dragon. The spiritual understanding of this creature is that of a beast that makes war with its mouth. It sends forth rivers of lies and deception that sweep men away into ruin. This river of falsehood is already coming forth, and it will increase in coming days.

People of God, I share this to warn you that great deception is to be unleashed at this time. If your mind is being filled with thoughts and images from the mass media, then you are already being assaulted with a flood of deception. Television programs and movies are created to manipulate minds and transform public opinion. Much of this comes out of Hollywood. The origins of the word “Hollywood” is “Holy Wood.” The holly was considered sacred to druids and witches. Witches wands are often made of holly. Hollywood is a center of witchcraft. It is designed to cast spells over people, making their minds susceptible and fertile instruments of Satan.

If you look to the major media for your news, you are being deceived. Things are not as they appear to be, nor as they are reported to be. The word of God at this hour is “Come out of Babylon My people, lest you participate in her sins and partake of her plagues.”

This deception is to increase at this time. As the world hurtles forward into calamitous days where the economies of the nations are laid in ruins, the cause of this ruin will be ascribed to events and people that had nothing to do with it. The actual perpetrators will remain hidden. Their evil work will be concealed. Those who are acting in the most evil manner will be depicted as victims, or even as saviors.

II Corinthians 11:14-15
For even Satan disguises himself as an angel of light. Therefore it is not surprising if his servants also disguise themselves as servants of righteousness...

As I correspond with Christians throughout the world I am appalled at the blindness and deception that is so prevalent. The saints have been spending too much time in the entertainments and pursuits of the world, and far too little time in communion with the Father. Their understanding is darkened, and their minds are full of confusion and error. Despite this tragic state, the church has not yet experienced anything like that which is coming.

Matthew 24:24
“For false Christs and false prophets will arise and will show great signs and wonders, so as to mislead, if possible, even the elect.”

If you have been neglecting prayer, Bible study, and meditation upon spiritual matters, then you are not prepared to walk wisely in the midst of great deception. If you have been imbibing freely of that which is on television, the movies, magazines, radio, and the Internet, not bringing such activities under the rule of the Spirit of Christ, then you risk being swept away in what is coming.

Will you find in coming days that you have the spiritual perception to walk wisely in the midst of a crooked and perverse generation? Or will you suffer loss due to the dimness of your spiritual vision? Will you be conned by the great deceiver and his servants in disguise, or will you see through the subterfuge and avoid the trap?

I recommend the following article for those who wish to discern the subtlety of Satan, and the works of those who are in collusion with him.

I give this warning, however, there is an image that is sexually impure on this page as the author reveals the hidden symbolism in a Coca Cola ad. The value of the information in the article is such that I would recommend the article anyway. Be discerning, and exercise that self-control that flows from the Spirit of Christ.

End Note: I spoke with Randy Simmons today and he told me about an experience he had yesterday as he was ministering to the homeless on the streets of Macon, GA. He and a sister in Christ and another man were going to a bank and there was an ambulance pulled up in front of the bank. Randy is sensitive to God speaking in parables, and a sick, injured, or dying financial system is an interpretation that readily comes to mind.

As they were looking at this unusual sight, the sister in Christ drew Randy’s attention to the song playing on the radio. It is titled Independence Day, and was sung by Martina McBride. The caught the following words:

Let freedom ring, let the white dove sing
Let the whole world know that today
Is a day of reckoning.
Let the weak be strong, let the right be wrong
Roll the stone away, let the guilty pay
It's Independence Day.

Well, she lit up the sky that fourth of July
By the time that the firemen came
They just put out the flames
And took down some names
And sent me to the county home.
Now I ain't sayin' it's right or it's wrong
But maybe it's the only way.
Talk about your revolution
It's Independence Day.

The name McBride means “son of the Bride.” The Scripture reference that comes to mind is Revelation 12, the man-child whom the woman gives birth to. All this occurs during a time of calamity and judgment. The hour is late.
Posted by Unknown at 8:00 AM